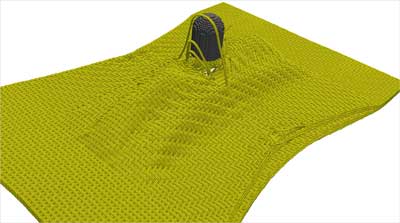 We know it’s out there, debris from 50 years of space exploration — aluminum, steel, nylon, even liquid sodium from Russian satellites — orbiting around the Earth and posing a danger to manned and unmanned spacecraft.

According to NASA, there are more than 21,000 pieces of ‘space junk’ roughly the size of a baseball (larger than 10 centimeters) in orbit, and about 500,000 pieces that are golf ball-sized (between one to 10 centimeters).

Sure, space is big, but when a piece of space junk strikes a spacecraft, the collision occurs at a velocity of 5 to 15 kilometers per second—roughly ten times faster than a speeding bullet!

“If a spacecraft is hit by orbital debris it may damage the thermal protection system,” said Eric Fahrenthold, professor of mechanical engineering at The University of Texas at Austin, who studies impact dynamics both experimentally and through numerical simulations. “Even if the impact is not on the main heat shield, it may still adversely affect the spacecraft. The thermal researchers take the results of impact research and assess the effect of a certain impact crater depth and volume on the survivability of a spacecraft during reentry,” Fahrenthold said.

Only some of the collisions that may occur in low earth orbit can be reproduced in the laboratory. To determine the potential impact of fast-moving orbital debris on spacecraft — and to assist NASA in the design of shielding that can withstand hypervelocity impacts — Fahrenthold and his team developed a numerical algorithm that simulates the shock physics of orbital debris particles striking the layers of Kevlar, metal, and fiberglass that makes up a space vehicle’s outer defenses.

Supercomputers enable researchers to investigate physical phenomenon that cannot be duplicated in the laboratory, either because they are too large, small, dangerous — or in this case, too fast — to reproduce with current testing technology. Running hundreds of simulations on the Ranger, Lonestar and Stampede supercomputers at the Texas Advanced Computing Center, Fahrenthold and his students have assisted NASA in the development of ballistic limit curves that predict whether a shield will be perforated when hit by a projectile of a given size and speed. NASA uses ballistic limit curves in the design and risk analysis of current and future spacecraft.

Results from some of his group’s impact dynamics research were presented at the April 2013 American Institute for Aeronautics and Astronautics‘ (AIAA) meeting, and have recently been published in the journals Smart Materials and Structures and International Journal for Numerical Methods in Engineering. In the paper presented at the AIAA conference, they showed in detail how different characteristics of a hypervelocity collision, such as the speed, impact angle, and size of the debris, could affect the depth of the cavity produced in ceramic tile thermal protection systems.

The development of these models is not just a shot in the dark. Fahrenthold’s simulations have been tested exhaustively against real-world experiments conducted by NASA, which uses light gas guns to launch ‘centimeter’ size projectiles at speeds up to 10 kilometers per second. The simulations are evaluated in this speed regime to insure that they accurately capture the dynamics of hypervelocity impacts.

Validated simulation methods can then be used to estimate impact damage at velocities outside the experimental range, and also to investigate detailed physics that may be difficult to capture using flash x-ray images of experiments.

The simulation framework that Fahrenthold and his team developed employs a hybrid modeling approach that captures both the fragmentation of the projectiles — their tendency to break into small shards that need to be caught — and the shock response of the target, which is subjected to severe thermal and mechanical loads.

“We validate our method in the velocity regime where experiments can be performed, then we run simulations at higher velocities, to estimate what we think will happen at higher velocities,” Fahrenthold explained. “There are certain things you can do in simulation and certain things you can do in experiment. When they work together, that’s a big advantage for the design engineer.”

Back on land, Fahrenthold and graduate student Moss Shimek extended this hybrid method in order to study the impact of projectiles on body armor materials in research supported by the Office of Naval Research. The numerical technique originally developed to study impacts on spacecraft worked well for a completely different application at lower velocities, in part because some of the same materials used on spacecraft for orbital debris protection, such as Kevlar, are also used in body armor.

According to Fahrenthold, this method offers a fundamentally new way of simulating fabric impacts, which have been modeled with conventional finite element methods for more than 20 years. The model parameters used in the simulation, such as the material’s strength, flexibility, and thermal properties, are provided by experimentalists. The supercomputer simulations then replicate the physics of projectile impact and yarn fracture, and capture the complex interaction of the multiple layers of a fabric protection system — some fragments getting caught in the mesh of yarns, others breaking through the layers and perforating the barrier.

“Using a hybrid technique for fabric modeling works well,” Fahrenthold said. “When the fabric barrier is hit at very high velocities, as in spacecraft shielding, it’s a shock-type impact and the thermal properties are important as well as the mechanical ones.”

Moss Shimek’s dissertation research added a new wrinkle to the fabric model by representing the various weaves used in the manufacture of Kevlar and ultra-high molecular weight polyethylene (another leading protective material) barriers, including harness-satin, basket, and twill weaves. Each weave type has advantages and disadvantages when used in body armor designed to protect military and police personnel. Layering the different weaves, many believe, can provide improved protection.

Fahrenthold and Shimek (currently a post-doctoral research associate at Los Alamos National Laboratory) explored the performance of various weave types using both experiments and simulations. In the November 2012 issue of the AIAA Journal, Shimek and Fahrenthold showed that in some cases the weave type of the fabric material can greatly influence fabric barrier performance.

“Currently body armor normally uses the plain weave, but research has shown that different weaves that are more flexible might be better, for example in extremity protection,” Shimek said.

Shimek and Fahrenthold used the same numerical method employed for the NASA simulations to model a series of experiments on layered Kevlar materials, showing that their simulation results were within 15 percent of the experimental outcomes.

“Future body armor designs may vary the weave type through a Kevlar stack,” Shimek said. “Maybe one weave type is better at dealing with small fragments, while others perform better for larger fragments. Our results suggest that you can use simulation to assist the designer in developing a fragment barrier which can capitalize on those differences.”

What can researchers learn about the layer-to-layer impact response of a fabric barrier through simulation? Can body armor be improved by varying the weave type of the many layers in a typical fabric barrier? Can simulation assist the design engineer in developing orbital debris shields that better protect spacecraft? The range of engineering design questions is endless, and computer simulations can play an important role in the ‘faster, better, cheaper’ development of improved impact protection systems.
“We are trying to make fundamental improvements in numerical algorithms, and validate those algorithms against experiment,” Fahrenthold concluded. “This can provide improved tools for engineering design, and allow simulation-based research to contribute in areas where experiments are very difficult to do or very expensive.”