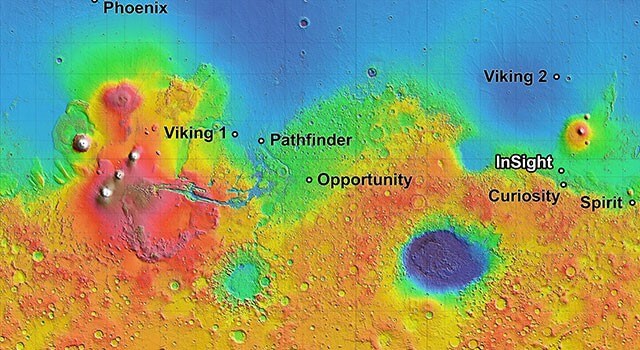 NASA has narrowed to four the number of potential landing sites for the agency’s next mission to the surface of Mars, a 2016 lander to study the planet’s interior.

The stationary Interior Exploration Using Seismic Investigations, Geodesy and Heat Transport (InSight) lander is scheduled to launch in March 2016 and land on Mars six months later. It will touch down at one of four sites selected in August from a field of 22 candidates. All four semi-finalist spots lie near each other on an equatorial plain in an area of Mars called Elysium Planitia.

Scientists will focus two of NASA’s Mars Reconnaissance Orbiter cameras on the semi-finalists in the coming months to gain data they will use to select the best of the four sites well before InSight is launched.

The mission will investigate processes that formed and shaped Mars and will help scientists better understand the evolution of our inner solar system’s rocky planets, including Earth. Unlike previous Mars landings, what is on the surface in the area matters little in the choice of a site except for safety considerations.

“This mission’s science goals are not related to any specific location on Mars because we’re studying the planet as a whole, down to its core,” said Bruce Banerdt, InSight principal investigator at JPL. “Mission safety and survival are what drive our criteria for a landing site.”

Each semifinalist site is an ellipse measuring 81 miles (130 kilometers) from east to west and 17 miles (27 kilometers) from north to south. Engineers calculate the spacecraft will have a 99-percent chance of landing within that ellipse, if targeted for the center.

Elysium is one of three areas on Mars that meet two basic engineering constraints for InSight. One requirement is being close enough to the equator for the lander’s solar array to have adequate power at all times of the year. Also, the elevation must be low enough to have sufficient atmosphere above the site for a safe landing. The spacecraft will use the atmosphere for deceleration during descent.

All four semifinalist sites, as well as the rest of the 22 candidate sites studied, are in Elysium Planitia. The only other two areas of Mars meeting the requirements of being near the equator at low elevation, Isidis Planitia and Valles Marineris, are too rocky and windy. Valles Marineris also lacks any swath of flat ground large enough for a safe landing.

InSight also needs penetrable ground, so it can deploy a heat-flow probe that will hammer itself 3 yards to 5 yards into the surface to monitor heat coming from the planet’s interior. This tool can penetrate through broken-up surface material or soil, but could be foiled by solid bedrock or large rocks.

“For this mission, we needed to look below the surface to evaluate candidate landing sites,” Golombek said.

InSight’s heat probe must penetrate the ground to the needed depth, so scientists studied Mars Reconnaissance Orbiter images of large rocks near Martian craters formed by asteroid impacts. Impacts excavate rocks from the subsurface, so by looking in the area surrounding craters, the scientists could tell if the subsurface would have probe-blocking rocks lurking beneath the soil surface.

InSight also will deploy a seismometer on the surface and will use its radio for scientific measurements.

For more information about InSight, visit: http://insight.jpl.nasa.gov . Additional information on the Discovery Program is available at: http://discovery.nasa.gov .