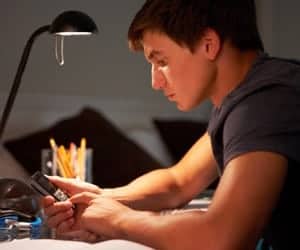 Teenagers who go to bed late during the school year are more prone to academic and emotional difficulties in the long run, compared to their earlier-to-bed counterparts, according to a new study from UC Berkeley.

Berkeley researchers analyzed longitudinal data from a nationally representative cohort of 2,700 U.S. adolescents of whom 30 percent reported bedtimes later than 11:30 p.m. on school days and 1:30 a.m. in the summer in their middle and high school years.

By the time they graduated from high school, the school-year night owls had lower GPA scores, and were more vulnerable to emotional problems than teens with earlier bedtimes, according to the study published online Nov.10 in the Journal of Adolescent Health.

The results present a compelling argument in favor of later middle and high school start times in the face of intense academic, social and technological pressures, researchers said.

“Academic pressures, busy after-school schedules, and the desire to finally have free time at the end of the day to connect with friends on the phone or online make this problem even more challenging,” said Lauren Asarnow, lead author of the study and a graduate student in UC Berkeley’s Golden Bear Sleep and Mood Research Clinic.

On a positive note, she said the findings underscore how a healthy sleep cycle promotes the academic and emotional success of adolescents.

“The good news is that sleep behavior is highly modifiable with the right support,” said Asarnow, citing  UC Berkeley’s Teen Sleep Study, a treatment program designed to reset the biological clocks of adolescents who have trouble going to sleep and waking up.

This latest UC Berkeley study used data from the National Longitudinal Study of Adolescent Health, which has tracked the influences and behaviors of adolescents since 1994. Focusing on three time periods – the onset of puberty, a year later and young adulthood – UC Berkeley researchers compared how the sleep habits of 2,700 teemagers aged 13-18 impacted their academic, social and emotional development. They looked at participants’ school transcripts and other education and health data.

While going to bed late in the summer did not appear to impact their academic achievement, including grades, researchers did find a correlation between later summer bedtimes and emotional problems in young adulthood.

Surveys show that many teenagers do not get the recommended nine hours sleep a night, and report having trouble staying awake at school. The human circadian rhythm, which regulates physiological and metabolic functions,  typically shifts to a later sleep cycle at the onset of puberty. UC Berkeley researchers theorize that an “evening circadian preference” in adolescence is a confluence of biological factors, as well as parental monitoring, academic and social pressures and the use of electronic gadgetry.

For example, bright lights associated with laptops, smartphones and other electronic devices have been found to suppress melatonin, a hormone that helps regulate the sleep cycle. UC Berkeley’s Teen Sleep Study uses dim lighting and limits technology before bedtime, among other interventions, to help reverse this night-owl tendency.

‘This very important study adds to the already clear evidence that youth who are night owls are at greater risk for adverse outcomes,” said UC Berkeley psychologist Allison Harvey, senior author of the paper. “Helping teens go to bed earlier may be an important pathway for reducing risk. This will not be an easy process. But here at Berkeley, our sleep coaches draw from the science of motivation, habit formation and sleep to help teens achieve earlier bedtimes.”