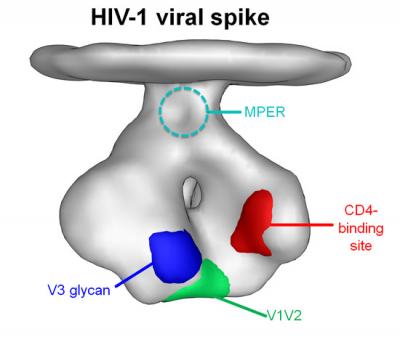 In an advance for HIV vaccine research, a scientific team has discovered how the immune system makes a powerful antibody that blocks HIV infection of cells by targeting a site on the virus called V1V2. Many researchers believe that if a vaccine could elicit potent antibodies to a specific conserved site in the V1V2 region, one of a handful of sites that remains constant on the fast-mutating virus, then the vaccine could protect people from HIV infection. Analyses of the results of a clinical trial of the only experimental HIV vaccine to date to have modest success in people suggest that antibodies to sites within V1V2 were protective. The new findings point the way toward a potentially more effective vaccine that would generate V1V2-directed HIV neutralizing antibodies.

They began by identifying an HIV-infected volunteer in the CAPRISA cohort who naturally developed V1V2-directed HIV neutralizing antibodies, named CAP256-VRC26, after several months of infection. Using techniques similar to those employed in an earlier study of HIV-antibody co-evolution, the researchers analyzed blood samples donated by the volunteer between 15 weeks and 4 years after becoming infected. This enabled the scientists to determine the genetic make-up of the original form of the antibody; to identify and define the structures of a number of the intermediate forms taken as the antibody mutated toward its fullest breadth and potency; and to describe the interplay between virus and antibody that fostered the maturation of CAP256-VRC26 to its final, most powerful HIV-fighting form.

Notably, the study revealed that after relatively few mutations, even the early intermediates of CAP256-VRC26 can neutralize a significant proportion of known HIV strains. This improves the chances that a V1V2-directed HIV vaccine developed based on the new findings would be effective, according to the scientists, who have begun work on a set of vaccine components designed to elicit V1V2 neutralizing antibodies and guide their maturation.