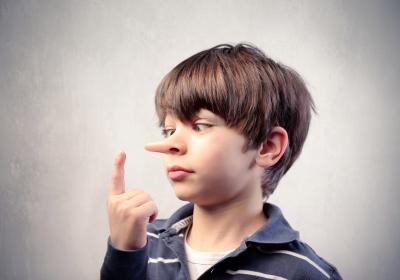 Surprisingly, the question had not been asked experimentally until Chelsea Hays, then an undergraduate student in psychology at the University of California, San Diego, approached professor Leslie Carver with it. Now the pair have a paper out in Developmental Science, suggesting that adult dishonesty does make a difference, and not in a good way.

“As far as we know,” said Carver, associate professor of psychology and human development in the UC San Diego Division of Social Sciences. “This is the first experiment confirming what we might have suspected: Lying by an adult affects a child’s honesty.”

The study tested 186 children ages 3 to 7 in a temptation-resistance paradigm. Approximately half of the children were lied to by an experimenter, who said there was “a huge bowl of candy in the next room” but quickly confessed this was just a ruse to get the child to come play a game. The others were simply invited to play, with no mention of candy.

The game asked children to identify character toys they couldn’t see by their sounds. Sounds and toys were pretty easy to pair: a “Tickle me” audio clip for Elmo; “I love cookies” for Cookie Monster; and “There is a rumbly in my tummy” for Winnie the Pooh. One sound was a deliberately tricky exception: Beethoven’s “Fur Elise,” which is not associated with any commercially available character toy.

“Why?” remains an open research question, Carver and Hays note in their paper. It could be the 5- to 7-year-old children were simply imitating the behavior modeled by the adult, or it could be they were making judgments about the importance of honesty to this adult. Or, it could be more nuanced: “Perhaps,” they write, “the children did not feel the need to uphold their commitment to tell the truth to someone who they perceived as a liar.”

But it didn’t seem to make any difference to the younger set, the preschoolers, whether they had been deceived by the experimenter earlier. They peeked and lied at about the same rates. That may be because 3- and 4-year-olds don’t have very sophisticated theory-of-mind abilities yet.

The study was not designed to get at the reasons that children are more likely to lie when they have been lied to, but to demonstrate that the phenomenon can occur, Carver said.

What happens when trusted care-givers do the lying also remains an open research question. But Carver and Hays are still urging restraint. Even if it’s expedient for an adult to lie – to get cooperation through deception, for example, or to get children to control their emotions – it’s probably a bad idea in the long run.

Earlier research, Carver and Hays note in the paper, has documented that the majority of parents admit to lying to their children even as they maintain that honesty is an important value.

“The actions of parents,” Carver and Hays write, “suggest that they do not believe that the lies they tell their children will impact the child’s own honesty. The current study casts doubt on that belief.”