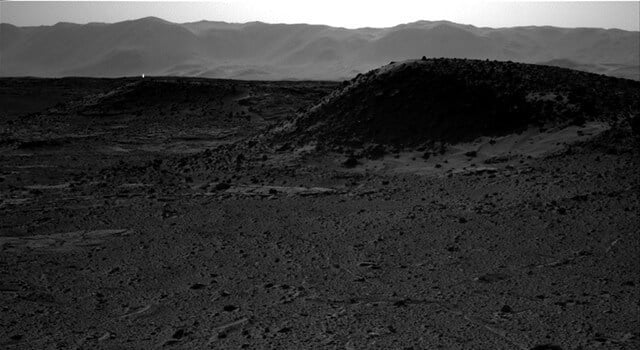 Images taken by NASA’s Curiosity Mars rover on April 2 and April 3 include bright spots, which might be due to the sun glinting off a rock or cosmic rays striking the camera’s detector.

The image from April 3, from Curiosity’s Navigation Camera, is online at: http://www.jpl.nasa.gov/spaceimages/details.php?id=PIA18077

The rover took the image just after arriving at a waypoint called “the Kimberley.” The bright spot appears on a horizon, in the same west-northwest direction from the rover as the afternoon sun.

“In the thousands of images we’ve received from Curiosity, we see ones with bright spots nearly every week,” said Justin Maki of NASA’s Jet Propulsion Laboratory, Pasadena, Calif., leader of the team that built and operates the Navigation Camera. “These can be caused by cosmic-ray hits or sunlight glinting from rock surfaces, as the most likely explanations.”

If the bright spots in the April 2 and April 3 images are from a glinting rock, the directions of the spots from the rover suggest the rock could be on a ridge about 175 yards (160 meters) from the rover’s April 3 location.

The bright spots appear in images from the right-eye camera of the stereo Navcam, but not in images taken within one second of those by the left-eye camera. Maki said, “Normally we can quickly identify the likely source of a bright spot in an image based on whether or not it occurs in both images of a stereo pair. In this case, it’s not as straightforward because of a blocked view from the second camera on the first day.”

At the Kimberley and, later, at outcrops on the slope of Mount Sharp inside Gale Crater, researchers plan to use Curiosity’s science instruments to learn more about habitable past conditions and environmental changes.

NASA’s Jet Propulsion Laboratory, a division of Caltech in Pasadena, manages the Mars Science Laboratory Project for NASA’s Science Mission Directorate, Washington. The project designed and built the project’s Curiosity rover and operates it on Mars.