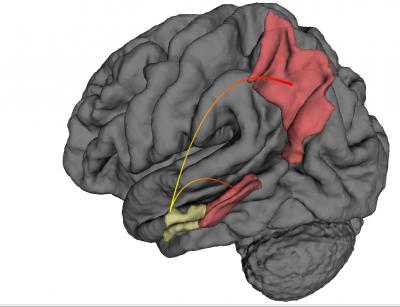 Alzheimer’s disease and weight loss may seem like an unrelated clinical pair, but researchers at Weill Cornell Medical College have uncovered a connection between the two, revealing a potential early biomarker of the disease that may lead to improved diagnostic tools and targeted therapies for patients.

The research team at Weill Cornell’s Feil Family Brain and Mind Research Institute discovered that the accumulation of a peptide called amyloid-beta inside the brain disrupts the body’s mechanism to regulate its weight, leading to accelerated weight loss years before diagnosis. The findings, reported in the Journal of Neuroscience and presented at the Leon Levy Symposium last spring, reveal the complex cascade of events, from the initial buildup of amyloid-beta peptides that form Alzheimer’s disease’s hallmark plaques to the final decrease in weight. This knowledge could eventually be used to diagnose the disease and intervene earlier in patients’ illnesses, and to potentially restore healthy body weight in those whose disease has progressed.

“Most researchers including myself have shifted focus to what’s happening in the early stages of Alzheimer’s disease,” said lead author Dr. Makoto Ishii, the Leon Levy Fellow and an instructor of neuroscience in the institute. “There have been a lot of big clinical trials in the news that have failed, so the thought is that perhaps once patients develop dementia it may be irreversible. Therefore, can we intervene earlier?”

Like other physicians, Dr. Ishii had noticed that Alzheimer’s patients — as well as his beloved grandmother — began losing weight up to six years before their diagnoses, with weight loss accelerating in the final year of their lives. The weight loss often occurs in the pre-symptomatic phase of the disease, before patients display symptoms of cognitive impairment. Dr. Ishii observed this process firsthand, noticing his grandmother lose weight before being diagnosed with Alzheimer’s disease four years later. He was a neurology resident at the time, and there was little he could do.

“When you see this in your family you say, ‘We have to do something,'” he said. “My grandmother was a big impetus for me personally.”

Using animal models to understand the connection between weight loss and Alzheimer’s disease, and working with senior author Dr. Constantino Iadecola, the institute’s director, Dr. Ishii compared the body weights of normal mice to mice with a mutant protein that expresses amyloid-beta peptides. He discovered that as amyloid-beta peptides increasingly accumulate in the brain, so does the weight disparity between the two groups. Accordingly, the investigators found that the mutant mice had low levels of the hormone leptin proportional to their fat stores. The low leptin should signal that the animal’s fat stores are depleted and to therefore eat more or use less energy to maintain a healthy body weight. Since the mice did not do either of these activities, the researchers knew there was a problem with the signaling process.

To investigate the missing signal, Dr. Ishii and Dr. Gang Wang, an associate research professor in neuroscience at the institute, used electrophysiology, a method that reveals the behavior of brain cells by measuring their electrical activity. They found that a key sub-type of brain cells that produce the appetite-stimulating signal Neuropeptide Y (NPY) in the hypothalamus, one of the major physiological control centers of the brain, were not responding to leptin and other important metabolic signals, thereby preventing the brain from receiving the message to correctly regulate body weight. They discovered that this kink in the signaling system could short-circuit the body’s mechanism for regulating its weight, resulting in a spiral of weight loss.

The scientists are optimistic that future research may yield similar results in humans. If it does, using significant drops in leptin concentration — in conjunction with other tools — could more accurately diagnose the disease since Alzheimer’s can be hard to identify and to differentiate from other forms of cognitive decline, especially early in the disease process when the symptoms may be subtle. Identifying high-risk patients could also help place them in clinical trials for emerging medications.

And if doctors are eventually able to replenish the dysfunctional NPY signaling to restore healthy body weight, they may be able to help already-diagnosed Alzheimer’s patients. Low body weight leads to increased illness and death in Alzheimer’s patients and the elderly population overall, so maintaining a healthy body weight would mitigate this risk, Dr. Ishii said. Since his team found that the disease process leading to Alzheimer’s disrupts the response of neurons to leptin in the hypothalamus, neurons in other areas — like the hippocampus, which controls memory, and the cortex, which controls executive function — could be similarly affected. Replenishing disrupted signaling in these regions could potentially promote brain health and boost cognitive function.

Dr. Ishii developed his investigation as part of his Leon Levy Fellowship, a neuroscience training program endowed by the Leon Levy Foundation and led by Dr. Iadecola. The related symposium, hosted by Weill Cornell on April 30, provided fellows with the opportunity to learn about the work being done by their peers.

“The symposium brought forth not only the senior mentors of the Leon Levy Fellows, but also people who are at my stage, so we can get to know each other and bounce ideas off each other,” said Dr. Ishii, whose mentor is Dr. Iadecola. “That was invaluable. This is a great tool because it helps advance neuroscience and neurology research at Weill Cornell by being part of the larger New York City community.”