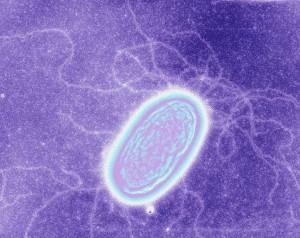 Scientific debate has been hot lately about whether microbial nanowires, the specialized electrical pili of the mud-dwelling anaerobic bacterium Geobacter sulfurreducens, truly possess metallic-like conductivity as its discoverers claim. But now University of Massachusetts Amherst microbiologist Derek Lovley, with postdoctoral researcher Nikhil Malvankar and colleagues, say they have settled the dispute between theoretical and experimental scientists by devising a combination of new experiments and better theoretical modeling.

In a series of papers going back to 2011, Lovley’s group provided several lines of experimental evidence that Geobacter pili conduct electrons through the close interaction of aromatic amino acids in the protein filament structure. As Malvankar explains, “Electrons flow like they do in a copper wire, hence the term metallic-like conductivity.” However, in the last two years many groups of theoretical modelers have published papers concluding that Lovley and Malvankar’s results are impossible.

In search of even more experimental data, Malvankar traveled to Brookhaven National Laboratory for two years to further evaluate the structure of Geobacter pili with sophisticated approaches including synchrotron X-ray microdiffraction and rocking-curve X-ray diffraction. He found a periodic 3.2-angstrom spacing of aromatic amino acids in the Geobacter pili, far closer together than the theoretical models predicted. Findings appear in the current issue of the journal mBio.

Lovely says, “In Nikhil’s experiments, we see a clear signature of the close packing of the aromatic amino acids. Non-conductive pili lack this. Also, when Nikhil acidified the pili, there was an increase in the packing of the aromatics in proportion to an increase in their conductivity. These results are consistent with our concept of metallic-like conductivity in the pili. None of the models that rejected our hypothesis were consistent with these results.”

To better understand the lack of correspondence between the experiments and models, Malvankar teamed up with Eric Martz, UMass Amherst emeritus professor and protein modeling expert. They found changing one simple assumption in building the pili model dramatically changed the outcome. Malvankar explains, “Previous models started with a template of the structure for Neisseria gonorrhoeae pili. However, Geobacter pili are actually more closely related to those of Pseudomonas aeruginosa. Our model is based onPseudomonas.”

Martz cautions, “We’re not claiming our model is 100 percent correct. In fact, we’re sure it’s not. But the other models simply can’t explain the experimental results. Our does. Also, the conductivity is coming from a protein. Scientists have always said that proteins cannot perform this function. We found not only do they do it, but they also do it well. This is fundamentally such an interesting finding that scientists will have to pay attention.”

This discovery, supported by funding from the U.S. Office of Naval Research, is expected to aid in engineering other bacteria to produce microbial nanowires with synthetic biology methods. For example, Lovley’s lab has invented an artificial form of photosynthesis in which microbes use renewable electricity to convert carbon dioxide to fuels and other organic chemicals. He says, “The better we understand how microbial nanowires work, the better our chances of optimizing the electrode-microbe electron exchange.”

Malvankar adds, “There is also the opportunity to capitalize on the fundamental design principles that nature is teaching us to produce novel electronic materials in a sustainable way.” In nature, Geobacter use their microbial nanowires to breathe; they transfer electrons onto iron oxides, natural rust-like minerals in soil, which serve the same function for these bacteria that oxygen does in humans. “What Geobacter can do with its nanowires is akin to breathing through a snorkel that’s 10 kilometers long,” he says.

Others in Lovley’s group have shown that Geobacter uses microbial nanowires to electrically communicate with other microbial species. This cooperative electron sharing is important in the conversion of organic wastes to methane, an effective bioenergy strategy. Nanowires are also key components of ongoing studies by Lovley’s lab to build biocomputers and novel biosensors. The UMass Amherst team is now working on a “pili factory” to make purified Geobacter pili freely available to other researchers, to repeat these experiments or carry out other studies.