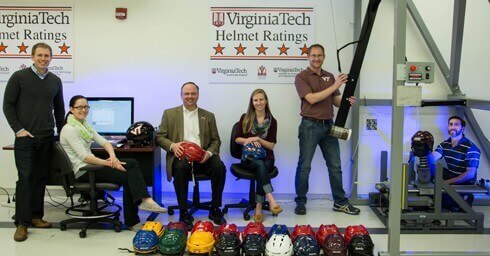 Virginia Tech has helped change football for a decade, making the sport safer for athletes without losing the thrill of participating or watching a rugged, intense sport. Now its College of Engineering turns to the ice for hockey.

Virginia Tech has released its five-star ratings of hockey helmets, judging their abilities to help prevent concussions. The findings so far: Only one of 32 tested helmets earned three stars with all other models faring worse in laboratory impact tests representative of the blows experienced by hockey players.

The first-of-their-kind ratings are three years in the making and follow Virginia Tech’s ratings of football helmets.

The Virginia Tech team, co-directed by Stefan Duma, head of the university’sDepartment of Biomedical Engineering and Mechanics, and Steven Rowson, an assistant professor with the department, purchased 32 pairs of new models of hockey helmets.

“Our focus is to improve the safety of the sport, and we have spent a great deal of time developing the methods and relaying these to the manufacturers so that they can optimize their designs,” Duma said. “Our hope is to see new helmets come into the market with improved performance.”

The findings are published in the April 2015 issue of Springer journal Annals of Biomedical Engineering. The Virginia Tech Helmet website contains all ratings and more information.

Researchers tested each helmet in four directions at three energy levels twice — a total 48 tests per model. The entire evaluation process included more than 2,000 impact tests done both on an ice rink and inside a laboratory.

Despite the low ratings of the helmets tested — from such manufacturers as Warrior, Reebok, Bauer CCM, and Eaton — Duma said he wants his findings to be used as a way to help, not hurt, hockey.

Six helmets earned two stars, 16 helmets got one star, and nine had zero stars. The helmet that tested best with three stars was the Warrior Krown 360, according to the report.

Duma and his team worked for more than three years on the project, forming the STAR (short for Summation of Tests for the Analysis of Risk) Evaluation System exclusive to hockey helmets. The team spent a decade perfecting a ratings system for football helmets. While football can be hazardous, hockey’s ice rink presents more opportunity for injury, researchers said. Players can suffer head injuries from high-speed contact with other players and can be slammed into boards surrounding the rink or fall onto the ice.

“Hockey has the highest rate of concussion of all sports. Football has more, but more people play football,” Rowson said. “By rate, hockey is the highest, especially for female hockey players. They have a range of bodily injuries, but we are focused on brain injuries and reducing the risk of concussion.”

Hockey helmets share the same basic plastic shell and interior padding of football helmets, but they are much smaller and adjustable, Duma said.

Cost had no impact on a helmet’s safety rating. Some helmets priced at less than $100 outperformed models that hit the $300 mark, added Bethany Rowson, lead author on the Hockey STAR paper, who is completing dual doctoral degrees in biomedical engineering and in veterinary medicine at the Virginia-Maryland College of Veterinary Medicine.

Bob Gfeller, executive director of the Childress Institute for Pediatric Trauma in Winston-Salem, North Carolina, is one of the many child safety advocates following the release of ratings and keen on seeing changes with the sport. “It makes a lot of sense for the team at Virginia Tech to apply their helmet rating system to hockey helmets,” he said. “The five-star rating system has changed the way the public views football helmet ratings. Both of these initiatives will improve sports safety.”

Since first releasing safety ratings data on football helmets four years ago, manufacturers have sought to improve their products, Duma said. In spring 2014, all five of the new adult football helmets to hit retail shelves earned top marks under the football portion of the STAR Evaluation System.

Ratings of youth football helmets, baseball, softball, and lacrosse helmets are expected to follow in the next decade. For all sports, the Virginia Tech has adopted a rolling update so as soon as new helmets hit the market, the research team immediately will test and rate them.

The team is careful to warn that any player in any sport can suffer a concussion, even with the best head protection. “There is no concussion-proof helmet, but the better helmets lower head acceleration and that lowers risk” Duma said.