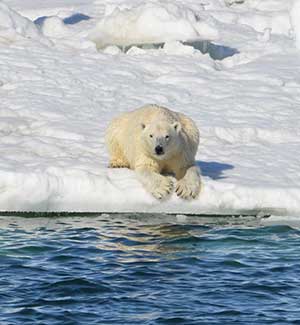 A team of scientists led by the U.S. Geological Survey found that polar bears, increasingly forced on shore due to sea ice loss, may be eating terrestrial foods including berries, birds and eggs, but any nutritional gains are limited to a few individuals and likely cannot compensate for lost opportunities to consume their traditional, lipid-rich prey—ice seals.

“Although some polar bears may eat terrestrial foods, there is no evidence the behavior is widespread,” said Dr. Karyn Rode, lead author of the study and scientist with the USGS. “In the regions where terrestrial feeding by polar bears has been documented, polar bear body condition and survival rates have declined.”

The authors detail their findings in a review article in Frontiers in Ecology and the Environment. The scientists noted that over much of the polar bear’s range, terrestrial habitats are already occupied by grizzly bears. Those grizzly bears occur at low densities and are some of the smallest of their species due to low food quality and availability. Further, they are a potential competitor as polar bears displaced from their sea ice habitats increasingly use the same land habitats as grizzly bears.

“The smaller size and low population density of grizzly bears in the Arctic provides a clear indication of the nutritional limitations of onshore habitats for supporting large bodied polar bears in meaningful numbers,” said Rode. “Grizzly bears and polar bears are likely to increasingly interact and potentially compete for terrestrial resources.”

The study found that fewer than 30 individual polar bears have been observed consuming bird eggs from any one population, which typically range from 900 to 2000 individuals. “There has been a fair bit of publicity about polar bears consuming bird eggs. However, this behavior is not yet common, and is unlikely to have population-level impacts on trends in body condition and survival,” said Rode.

Few foods are as energetically dense as marine prey. Studies suggest that polar bears consume the highest lipid diet of any species, which provides all essential nutrients and is ideal for maximizing fat deposition and minimizing energetic requirements. Potential foods found in the terrestrial environment are dominated by high-protein, low-fat animals and vegetation. Polar bears are not physiologically suited to digest plants, and it would be difficult for them to ingest the volumes that would be required to support their large body size.

“The reports of terrestrial feeding by polar bears provide important insights into the ecology of bears on land,” said Rode. “In this paper, we tried to put those observations into a broader context.  Focused research will help us determine whether terrestrial foods could contribute to polar bear nutrition despite the physiological and nutritional limitations and the low availability of most terrestrial food resources. However, the evidence thus far suggests that increased consumption of terrestrial foods by polar bears is unlikely to offset declines in body condition and survival resulting from sea ice loss.”

The review article was developed by researchers at the USGS, Washington State University, and Polar Bears International.