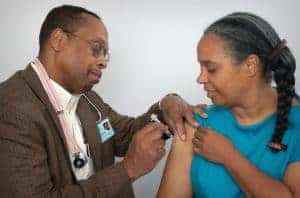 Researchers have discovered a way to trigger a preventive response to a flu infection without any help from the usual players – the virus itself or interferon, a powerful infection fighter.

The finding, in both mouse and human cells, suggests that manipulating a natural process could someday be an alternative way to not just reduce the severity of the flu, but prevent infection altogether.

“The flu vaccine needs to change every year because the virus is constantly mutating. What we’re doing is targeting a more fundamental process that is not specific to any particular strain of the virus,” said Jacob Yount, assistant professor of microbial infection and immunity at The Ohio State University and senior author of the study.

After showing in cells that altering the role of one protein can stop the virus in its tracks, Yount’s lab has begun using experimental drugs to test this flu prevention strategy in mice. Any possibility for human use is still many years away, but the scientists’ long-term goal is to develop a vaccine-independent method to prevent flu infections.

“If we were to have an outbreak of some pandemic influenza virus similar to what we experienced in 2009, I could envision using this technique to help people who are particularly vulnerable to infection,” he said. “It would work best if used before an infection, because the strategy prevents cells from becoming infected in the first place.”

The research is published in the journal PLOS Pathogens.

The method involves raising the level of a protein that is known to be effective against all strains of influenza ever tested. The trick for infection prevention, however, is boosting that protein’s level in cells before the virus shows up. Doing that, the scientists discovered in this study, involves suppressing the function of another protein.

Under natural conditions, IFITM3 is produced in large quantities only after the flu virus is present, so it can reduce the severity of infection. But the way it targets the virus – by trapping it and disabling its ability to make copies of itself – means that increasing the protein level before the flu ever arrives would prevent infection from occurring.

Enough IFITM3 is produced in all cells to maintain a small but steady presence, but it has a short lifespan. If a cell doesn’t see a need for its virus-fighting function, the protein is degraded. However, when flu virus does invade a cell, the cell cranks up production of interferon, which prompts increased production of IFITM3.

Interferon has another role, as well: telling an enzyme that degrades IFITM3 to hold off on that job so the IFITM3 level can stay high and fend off an influenza attack. This enzyme, also a protein, proved to be the silver bullet in Yount’s work on flu prevention.

The enzyme is called NEDD4 (pronounced Ned-4), and it degrades IFITM3 by attaching a small chain of molecules to it – a common process of protein clearing called ubiquitination.

In a series of experiments in mouse and human lung cells, Yount and colleagues showed that inhibiting NEDD4 from doing this job led to an accumulation of IFITM3 in the cells and greater resistance to infection by flu viruses.

IFITM3 is known to be important to humans because previous research has shown that it is the only identified protein containing a frequent genetic mutation linked to severe flu infections. Mice – and their cells – are effective models for this research because mice lacking the same IFITM3 protein are highly susceptible to flu infections.

Being able to stimulate this response is important for many reasons, not the least of which is keeping interferon out of the process. Interferon’s infection-fighting power is accompanied by severe side effects – most commonly associated with its former use as a treatment for Hepatitis C – that include, not surprisingly, flu-like symptoms.

“We figured out a way to induce just this single interferon response – the most important thing interferon does for flu,” Yount said. “That was a huge finding – that you don’t need an infection or interferon to increase the level of IFITM3. The steady-state level of the protein is enough to inhibit the virus if you get rid of NEDD4.”

Exactly how – and when – to get rid of NEDD4 remains an open question. Without this enzyme, embryonic mice cannot survive to birth, indicating it is important to fetal development. But later in life, lacking NEDD4 might not pose any health problems – which is why Yount is currently testing the effects of suppressing NEDD4 on adult mice.

This work was supported by grants from the National Institute for Allergy and Infectious Diseases. Yount completed the research with co-authors Nicholas Chesarino and Temet McMichael, both Ohio State graduate students.