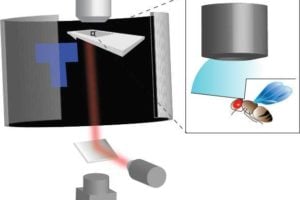 A unique insect has given researchers the opportunity to study aging in the wild for the first time. “Aging – or senescence – has been seen under controlled conditions in the lab, but never before in insects living in their naturally evolved habitat,” says U of T zoology doctoral candidate Russell Bonduriansky. “Our study of antler flies shows these animals do age in the wild.” Bonduriansky and co-researcher Chad Brassil, both of the evolutionary ecology group at U of T, studied male antler flies to see if there was aging – a term used to denote a deterioration of the body’s vital functions, not chronological time. The two zoologists examined the flies to see if their abilities to survive to the next day and to mate deteriorated with age.