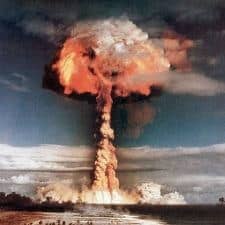 Even when surgical tumor removal is combined with a heavy dose of chemotherapy or radiation, there’s no guarantee that the cancer will not return. Now researchers at Tel Aviv University are strengthening the odds in favor of permanent tumor destruction — and an immunity to the cancer’s return — with a new method of tumor removal.

Based on “tumor ablation,” a process through which the tumor is destroyed inside the body, Prof. Yona Keisari of TAU’s Sackler Faculty of Medicine and Prof. Itzhak Kelson of TAU’s Department of Physics and Astronomy have developed a radioactive wire, less than an inch long and about the width of a pin. When inserted into a solid tumor, the wire releases lethal radioactive atoms that irradiate the tumor from the inside out.

As it breaks down, the tumor releases antigens which trigger an immune response against the cancerous cells, Prof. Keisari explains. Not only are cancerous cells more reliably destroyed, but in the majority of cases the body develops immunity against the return of the tumor, a rare happening when the tumor is removed surgically.

The research has been published in a number of academic journals, most recently Translational Research.

Currently, cancer patients receive gamma radiation when they undergo radiation therapy. Although alpha particles are much more effective, their range is so short that they’re unable to penetrate the skin, and therefore ineffective in traditional radiation treatments. As developed in Prof. Kelson’s lab, the radioactive wire circumvents the drawbacks of alpha radiation by implanting radioactive ions directly into the tumor.

“The wire is coated in atoms that emit not just alpha particles, but also daughter atoms which are themselves alpha emitters. These particles diffuse inside the tumor, spreading further and further before disintegrating,” Prof. Kelson explains. “It’s like a cluster bomb — instead of detonating at one point, the atoms continuously disperse and emit alpha particles at increasing distances.” The process takes approximately ten days, leaving only non-radioactive and non-toxic amounts of lead. The wire itself, which is initially inserted into the tumor by hypodermic needle, decays harmlessly in the body.

In pre-clinical trials on mouse models, this method has shown a distinct advantage over surgical tumor removal. One group of the mice was treated with surgical tumor removal, while another group underwent ablation treatment using the radioactive wire. When cells from the tumor were re-injected into the subject, 100 percent of those treated surgically redeveloped their tumor, compared to only 50 percent of those treated with the radioactive wire. The researchers have had excellent results with many types of cancer models, including lung, pancreatic, colon, breast, and brain tumors.

Ultimately, this shows that tumor removal by ablation increases immunity against the return of the cancerous tumor cells. “Surgery can eliminate 80 to 90 percent of a tumor, chemotherapy another 5-15 percent,” says Prof. Keisari. “There are often a small number of metastatic cells left in the body, and they kill about 85% of the patients.” Ablation methods, through the stimulation of specific anti-tumor immunity, have a better record for killing off the cancer cells that escape other types of treatment. It’s also less invasive, more efficient, and more cost-effective.

According to Prof. Keisari, this is just the beginning of an emerging field of cancer treatment. He hopes to see researchers from all over the world come together to create a comprehensive view of the advances in tumor ablation and the stimulation of anti-tumor immunity.

In collaboration with Prof. Rafi Korenstein, also of the Sackler Facutly of Medicine, Prof. Keisari has developed a second ablation technique, called pulsed electric current ablation, in which electrodes are inserted into tumors and emit electrical currents to create a chemical reaction that destroys the tumor.

2 thoughts on “Blasting Cancer from the Inside Out”