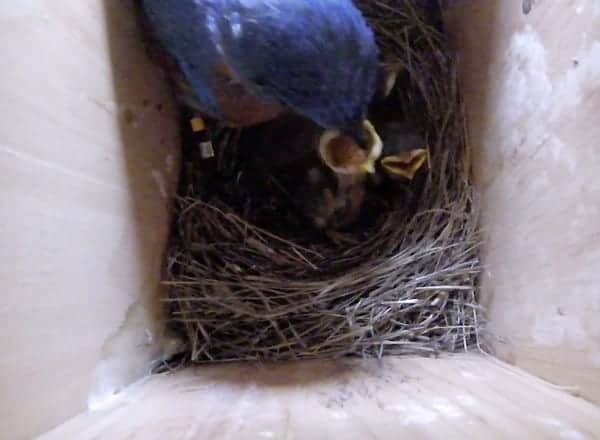 Some songbirds are not dissuaded by constant, loud noise emitted by natural gas pipeline compressors and will establish nests nearby. The number of eggs they lay is unaffected by the din, but their reproductive success ultimately is diminished.

Using small GoPro cameras, the researchers were able to measure parental behavior in the nest. They were able to quantify incubation rates by females and feeding rates by both parents. In this video, you can see a female eastern bluebird incubating eggs and a male eastern bluebird rotating the eggs and feeding chicks prey items. If you look closely, you can also see the male keep part of the earthworm for himself.

Importantly, the birds did not preferentially select quiet boxes over noisy boxes, suggesting they do not recognize the reduction in habitat quality resulting from the noise,” said study co-author Margaret Brittingham, professor of wildlife resources, College of Agricultural Sciences. “But both bluebirds and tree swallows nesting in noisy boxes spent less time incubating their eggs, had fewer eggs hatch and produced fewer young than their neighbors nesting in quiet boxes.”

Natural gas is one of the most rapidly growing global energy sources, with continued expansion expected in shale gas development in particular. Compressor stations needed to pressurize gas and push it through pipelines to consumers — often located in interior forests used by breeding birds — may be depressing birds’ reproduction in isolated forested areas.

The researchers were interested in how nests varied across the noise treatment and kept track of when nests were initiated and how many eggs were laid. These photos show how laying date and ultimate clutch size varied through the breeding season with panel A showing nests early in the season and panel B showing nests two to three weeks later during incubation.

The experiment, believed to be the first of its kind, was conducted at Penn State’s Russell E. Larson Agricultural Research Center at Rock Springs, in central Pennsylvania. The study was unique because the researchers took extensive precautions to be sure they were assessing only the birds’ reaction to the compressor noise and not other factors.

The design of the experiment allowed researchers to control for the confounding effects of both physical changes to the environment associated with compressor stations as well as the strong tendency for birds to return to the specific locations where they previously had bred.

Researchers established the 40 pairs of nest boxes to attract bluebirds and tree swallows to a site with no previous breeding population and immediately introduced shale gas compressor noise to half the boxes before birds returned to the region, while the other 40 boxes served as controls.

Researchers took a risk initiating the study — they weren’t sure bluebirds like this one would find and occupy their boxes.

“We took a risk initiating the study — we weren’t sure these birds would find and occupy our boxes,” Avery said. “We hoped that, ‘if we build it, they will come.’ Bluebirds likely had other nearby spots to nest, and the tree swallows were just returning from Central America. There was no guarantee they’d encounter our boxes.”

The research was led by Danielle Williams, a master’s degree student in wildlife and fisheries science, who currently is field coordinator for Purdue University’s Hardwood Ecosystem Experiment.

Williams monitored video feeds from cameras placed within boxes to document changes in breeding behavior. She noted that there was no difference in clutch size — eggs laid — between noisy boxes and quiet boxes. Feeding behavior by the adults, known as provisioning, also was the same in both. However, in both species, she observed a reduction in incubation time, hatching success and fledging success — the proportion of all eggs that fledged — in noisy boxes compared to quiet boxes.

The experiment was conducted at Penn State’s Russell E. Larson Agricultural Research Center at Rock Springs, in central Pennsylvania. Researchers established 40 pairs of nest boxes to attract bluebirds and tree swallows and immediately introduced shale gas compressor noise to half the boxes before birds returned to the region, while the other 40 boxes served as controls. Speakers are shown here.

The findings, recently published in Ornithological Applications, demonstrate that compressor noise caused behavioral changes that led to reduced reproductive success for eastern bluebirds and tree swallows. The results indicate, the researchers said, that natural gas infrastructure can create an “equal-preference ecological trap,” where birds do not distinguish between lower and higher quality territories, even when they incur reproductive costs.

Nest success — the probability of fledging at least one young — calculated from all nests that were initiated, was not affected by noise in either species studied, Brittingham pointed out.

“That suggests that noise did not increase rates of either depredation or abandonment but instead negatively impacted fitness through reduced hatching and fledging success,” she said. “We never would have known that if we had not done this research.”

Researchers found that feeding behavior by the adult birds, known as provisioning — shown here in a screen grab from one of the videos — was the same in both noisy boxes and quiet boxes.

The U.S. Department of Agriculture’s National Institute of Food and Agriculture, Penn State’s Schreyer Institute for Teaching Excellence, the Association of Field Ornithologists and the NASA Pennsylvania Space Grant Consortium funded this research.