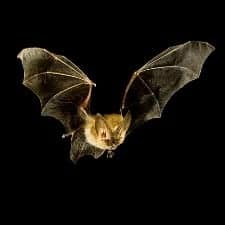 Abandoned army bunkers along the Jordan River have become a habitat for 12 indigenous bat species, three of which are already designated as endangered and two that are on the critical list. The bats were recently identified by a group of Tel Aviv University researchers who were granted access to the bunkers, spread out along a 60-mile-long stretch of land between the Sea of Galilee in the north of Israel to the Dead Sea’s northern edge.

According to Ph.D. student Eran Levin of TAU’s Department of Zoology, the local bat population is estimated to be in the thousands. “There is no doubt that, by being in a closed military zone that has prevented human interference, the bat habitat allows these delicate creatures to thrive,” he said. The underground forts have been empty since a peace treaty was signed with Jordan in 1994.

The researchers are now working to make the bunkers a more hospitable place for the bats by “roughing up” the steel and concrete walls — suspending mesh sheets and wooden pallets and spraying insulating foam and stuck stones to surfaces to provide a better grip. Night cameras have also been installed to keep an eye on the bats’ movement and behavior.

The bats are earning their lodging by serving as an asset to the environment. They each eat a few grams of insects every night, reducing the need for pesticides.