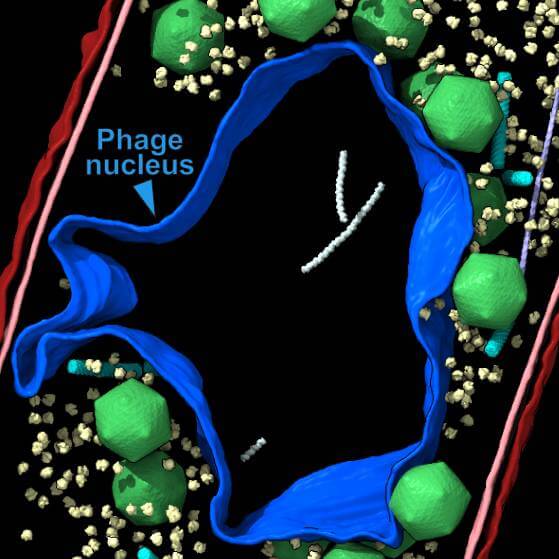 Recently, biomedical scientists have ramped up interest in viruses known as bacteriophages, or phages, which can infect and kill dangerous bacteria. Phages, the most abundant organisms on the planet, are now recognized as a promising tool for combating bacterial infection as science seeks new therapies for rising waves of antibiotic resistance. Scientists would like to unlock the secrets of phages’ evolutionary strategies in their ongoing conflict with bacteria.

A group of researchers with various specialties across the University of California San Diego campus have now leveraged new technologies to offer insights into previously unrecognized phage biological structures and processes. Publishing in the journal Nature, they offer an unprecedented look into an under-studied family known as “jumbo phages” and their remarkably evolved defenses against bacteria.

Among their discoveries, scientists from the laboratories of Elizabeth Villa, Kevin Corbett and Joe Pogliano found that jumbo phage cells construct a shielded compartment that acts similar to a nucleus in human and animal cells and protects the virus’ core genetic material, which is needed to replicate and spread. The research team characterized the structure of the nucleus-like compartment for the first time using leading technologies, including cryo-electron microscopy and tomography at the highest resolution possible for cell imaging.

“It’s a different kind of compartment—unlike anything we have ever seen in nature,” said Villa, an associate professor in the UC San Diego School of Biological Sciences and a Howard Hughes Medical Institute Investigator. “We were able to characterize this compartment—how it assembles and functions at the most basic level—from each atom to the scale of the entire organism.”

Department of Chemistry and Biochemistry Professor Rommie Amaro and her colleagues then applied state-of-the art computational techniques to simulate the phage structure’s functions and remarkable flexibility. The researchers found that the compartment allows certain key components inside, while simultaneously serving as a defense mechanism against bacterial threats.

“These discoveries present us with a whole new era of phage biology,” said Villa. “The shell serves as a growing shield for protection but it also has to import and export some things, and it does this with exquisite precision and selectivity. It’s really weird biology.”

The researchers discovered that the phage’s nucleus-like shell assembles from a single protein. Given its role in phage defense, they named the protein chimallin after the shield carried by ancient Aztec warriors.

Study coauthor Joe Pogliano, a professor in the Department of Molecular Biology, has been studying these phages for more than 10 years. He believes nucleus-forming phages could be better for phage therapies against bacterial infections because they evolved to be naturally resistant to many types of bacterial defense systems.

“As we move toward the development of phage therapies, we’ll need to learn more about this newly discovered phage nucleus since it appears to make them better at attacking bacteria,” said Pogliano. Researchers, including Pogliano and Villa, will be collaborating with experts in UC San Diego’s Center for Innovative Phage Applications and Therapeutics, the first dedicated phage therapy center in North America. “Now that we know certain phages have a shield, we could give it to other phages and make ‘super phages’ that are better at phage therapy and overcoming bacterial defenses. The first step in that process is understanding the structure of the chimallin protein which makes up the shield, which is one reason this work is so important.”

Professor Kevin Corbett, a member of the Department of Cellular and Molecular Medicine, added biochemistry and structural biology expertise to the research team. He describes the findings as an example of convergent evolution in which distantly related organisms find similar ways to solve problems.

“The nuclear pore in eukaryotes is a gigantic, complex structure with very distinctive ways of keeping most proteins out but specifically importing others. What we’re probably looking at with the jumbo phage is a dramatically simpler method of solving the same problem,” said Corbett. “It’s an amazingly creative solution—similar but simpler—to protecting its genome from the outside world by building a wall to separate it from bacterial defenses.”

Co-first author Thomas Laughlin, a Biological Sciences postdoctoral scholar, led the visualization of the jumbo phage compartment. Using facilities and technological resources unique to UC San Diego, and in coordination with co-first author Amar Deep and other members of collaborating labs, they helped characterize the compartment from the scale of microns to atoms to help decipher its functions.

Laughlin said he was most surprised at finding that the compartment is formed with multiple copies of the chimallin protein arranged as a square lattice, or fishnet-like configuration. Since honeycomb (hexagonal) configurations are much more common in nature, Laughlin and the other members of the team did not anticipate such a simple structure underlying the compartment’s structure.

Laughlin and the other researchers say their findings about the jumbo phage and its compartment lead to many more questions, including how certain components are processed inside and outside the shell.

“We now know the principle structure of the compartment of a mature phage nucleus, but we’d like to know how it assembles to begin with,” said Laughlin. “What is the biogenesis (or “prequel”) at the early stages of infection? How does it all start once the virus injects its genome into the host bacteria?”