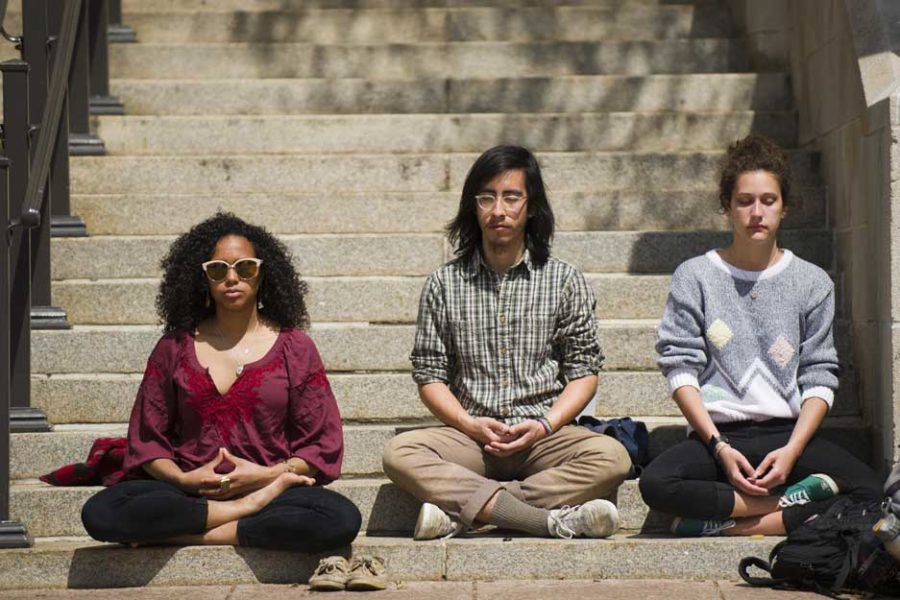 Gaëlle Desbordes has long known the soothing power of meditation; she first tried it in grad school to de-stress from the workload.

Now a visiting scholar at BU’s Center for Computational Neuroscience and Neural Technology, she’s probing meditation’s off-the-clock benefits—how it might help your brain manage emotion even when you’re not meditating.

In a paper Desbordes (GRS’07) wrote for the journal Frontiers in Human Neuroscience, she concludes that meditation may stabilize emotions long after meditators have opened their eyes.

Desbordes’ research team, whose lead investigator was Eric Schwartz, a College of Arts & Sciences professor of cognitive and neural systems, scanned the brains of the study’s 36 subjects while they viewed 216 pictures meant to induce emotions—positive, negative, and neutral. Some subjects were trained in meditation, others were not.

One group of 12 subjects was trained in “mindful attention meditation,” a common type that stresses attention to one’s breathing and emotions in the moment. Another group studied “compassion meditation,” in which the meditator tries to develop loving kindness for herself and others. A third, control group studied general health education rather than meditation. As all the subjects were scanned, they watched emotion-inducing images. Happy images showed things like a smiling family, people hugging, or athletes rejoicing after a victory, says Desbordes. Negative images ranged from portraits of distressed or sad-looking folks to shots of warfare or malnourished people.

The brain scans, which focused on the right amygdala, a part of the brain that processes memory and emotion, showed that those in the control group had no decrease in their amygdala response. Those trained in mindful attention saw the amygdala response decrease for all three types of images, and the compassion group had decreased response to positive and neutral images, but a heightened response to negative images.

Curiously, that response didn’t translate into stress for the subject; rather, “the more people had this enhanced activation in the amygdala, the less depressed they reported they were,” Desbordes says. She theorizes that compassion training made the group more sensitive to other people’s suffering, but also made them feel “more connected to other people,” in the same way that people might develop a stress-reducing bond when they’re in difficult circumstances together.

The reaction in the compassion group seemed to be, “‘We’re all in this together. You’re suffering, I suffer,’ and then there’s a kind of good feeling with that…because depression is also associated with feeling lonely,” says Desbordes.

Lasting emotional stability is a goal of meditation, says the researcher, “so it’s not surprising that there are effects that endure beyond the time when people are actively meditating. But this is the first time that we can see that objectively, with a measure from the brain, as opposed to people reporting, ‘Oh, I feel less stressed in general.’”

Schwartz, who also holds appointments in the School of Medicine and the College of Engineering, has meditated for 40 years. He says he hopes the finding will persuade other researchers to more seriously consider meditation as a window on the brain and its workings.

He cites other research suggesting that chronic stress damages the body, possibly worsening deepening illnesses, from lupus and multiple sclerosis to diabetes and heart disease, perhaps even senescence. If so, he says, meditation could also become a “low-risk, low-cost” therapy. (The United Kingdom’s medical establishment already includes meditation among its recommended treatments for depression, pivoting off research into the effectiveness particularly of mindfulness meditation, according to Desbordes.)

She says a larger cohort of subjects would be desirable to buttress the findings, but brain scanning is expensive, and the number of subjects in this study was typical of brain imaging research. Besides, “if you have only 12 subjects, you need to have a really big effect for it to become statistically significant. That’s the case here.”