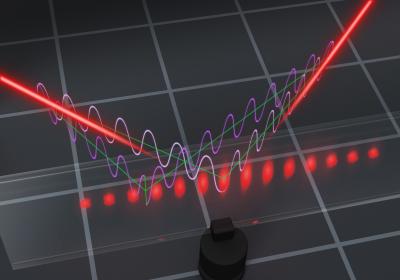 Imagine you order a delivery of several glass vases in different colors. Each vase is sent as a separate parcel. What would you think of the courier if the parcels arrive apparently undamaged, yet when you open them, it turns out that all the red vases are intact and all the green ones are smashed to pieces? Physicists from the University of Warsaw and the Gdansk University of Technology have demonstrated that when quantum information is transmitted, nature can be as whimsical as this crazy delivery man.

Experiments on individual photons, conducted by physicists from the Faculty of Physics at the University of Warsaw (FUW) and the Faculty of Applied Physics and Mathematics at the Gdansk University of Technology (PG), have revealed yet another counterintuitive feature of the quantum world. When a quantum object is transmitted, its quantum property – whether it behaves as a wave or as a particle – appears to depend on other properties that at first glance have nothing to do with the transmission. These surprising results were published in the research journal Nature Communications.

Wave-interference experiments are some of the simplest and most elegant, and can be conducted by almost anyone. When a laser beam is directed at a plate with two slits, we observe a sequence of light and dark fringes. It has long been known that the fringes are visible even when just individual particles – single electrons or photons – pass through the slits. Physicists assume that every individual particle exhibits wave properties, passing through both slits at once and interfering with itself.

The situation is very different when it is possible to detect the path taken by a given photon or electron and determine which slit the particle has passed through, at least in principle. When information about the particle path leaks from the system to the observer, the interference disappears and instead of interference fringes no pattern is observed.

In order for photons to exhibit interference, their wavelengths must be the same, while electrons must have the same energy. However, quantum particles have a number of other properties. For example, they can be polarized (their electrical field vibrates in a certain plane) or have different spin orientations (a quantum property describing the dynamics of an object at rest).

“So far, it has been generally assumed that additional properties such as spin and polarization do not have a non-trivial impact on interference. We decided to study the topic in more depth, and we were surprised by the results we obtained,” says Prof. Konrad Banaszek (FUW).

The experiments by physicists from the University of Warsaw and the Gdańsk University of Technology started by generating heralded photons. “The name sounds complicated, but the idea is simple in itself,” according to Prof. Czeslaw Radzewicz (FUW). “We generate photons using a process in which they must be created in pairs. When we register one photon, we can be certain that the second was also born, and we know its properties such as direction or wavelength without destroying it. In other words, we use one photon to herald the generation of the second photon.”

Each heralded photon was directed individually towards an interferometer, comprising two calcite crystals. In the first crystal, the photon was split and then sent through both arms of the interferometer at the same time. In each arm, researchers altered the polarization of the photon (the plane of vibration of its electrical field) by introducing noise. In the second calcite crystal, the paths were recombined to create a distinctive set of interference fringes, provided that the system did not leak any information as to which arm the given photon travelled along. The final stage of the experiment involved measuring the interference fringes using silicon avalanche photodiodes.

“It turned out that we were able to use measurements of interference fringes to determine how much information had leaked during transmission of the photon through the interferometer. In other words, we could be certain whether any eavesdropping had taken place during transmission,” says Dr Michal Karpinski (University of Warsaw, currently University of Oxford), responsible for building the experimental system and conducting the measurements.

The results have revealed a new, surprising property of reality: the polarization of photons, or other internal degrees of freedom, play a highly non-trivial role in interference between the two paths.

“It is almost as though the quality of a courier delivery – for example, whether a glass vase delivered inside a securely packed parcel is still in one piece – depends on whether the vase is green or red. In our world the color has no bearing on whether the vase arrives intact or not. However, the condition of the parcels our ‘quantum courier’ delivers does indeed depend on internal properties that seem to have nothing to do with interference,” according to Prof. Pawel Horodecki (PG).

The results allow physicists to examine the fundamental properties of reality in new, more comprehensive ways, as well as having practical applications in quantum cryptography. The Warsaw and Gdansk physicists have successfully derived a general inequality making it possible to precisely estimate the volume of information leaking from the measurement system.