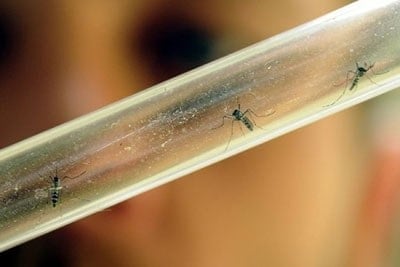 A study conducted at the University of Hawaiʻi Mānoa John A. Burns School of Medicine sought to evaluate the use of the commercially available, Food and Drug Administration approved InBios Dengue virus IgM ELISA kit for rapid diagnosis of dengue virus infection. This kit detects anti-dengue virus IgM antibodies, which are produced within three to five days after the onset of dengue fever.

Dengue virus clinical manifestations vary from asymptomatic infection, mild fever to a severe disease characterized by hemorrhage and shock. Dengue virus outbreaks occurred in Hawaiʻi in 2001 and 2011 with 153 and 4 dengue cases, respectively.

In the study, “Evaluation of a new commercially available immunoglobulin M capture enzyme-linked immunosorbent assay for diagnosis of dengue virus infection”, published in the Journal of Clinical Microbiology, the School of Medicine’s Department of Tropical Medicine, Medical Microbiology and Pharmacology tested 79 well characterized clinical serum samples collected from Hawaiʻi, Vietnam, Niue, Singapore and American Samoa, where dengue virus outbreaks occurred in the past, using InBios DENV IgM ELISA kit and results were compared to that of “gold standard” DENV IgM antibody capture ELISA (MAC-ELISA). The agreement, sensitivity and specificity of the InBios assay were 94, 92 and 94 percent respectively.

The study found that InBios’ DENV Detect IgM Capture ELISA is advantageous compared to the in-house MAC-ELISA, as the results can be obtained in less than five hours, whereas the in-house MAC-ELISA requires 2 to 3 days. The researchers concluded that InBios DENV IgM Capture ELISA can be effectively used for rapid diagnosis of acute or recent DENV infection.

Dengue is a significant human pathogen of global importance. Today about 2.5 billion people, or 40 percent of the world’s population, live in areas where there is a risk of dengue transmission. Dengue is endemic in at least 100 countries in Asia, the Pacific, the Americas, Africa and the Caribbean.

Recent reports indicate that there are about 350 million people infected with the dengue virus annually worldwide, triple the World Health Organization estimates of 50 to 100 million annual infections, mostly among children.

Recently there have been reported outbreaks in Kenya (May 2013) and Angola (June 2013). Although most of the reported cases in the United States are acquired by travelers or immigrants, autochthonous dengue fever outbreaks have occurred in Brownsville, TX (2005), southern Florida (2009–2011) and Hawaiʻi (2011).

Adapted from a news release issued by University of Hawaiʻi Mānoa