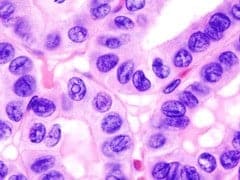 For those who think that space exploration offers no tangible benefits for those of us on earth, a new research discovery involving thyroid cancer may prove otherwise.

In a new report appearing in the February 2014 issue of The FASEB Journal, researchers from Germany and Denmark show that some tumors which are aggressive on earth are considerably less aggressive in microgravity. By understanding the genetic and cellular processes that occur in space, scientists may be able to develop treatments that accomplish the same thing on earth.

“Research in space or under simulated microgravity using ground-based facilities helps us in many ways to understand the complex processes of life and this study is the first step toward the understanding of the mechanisms of cancer growth inhibition in microgravity,” said Daniela Gabriele Grimm, M.D., a researcher involved in the work from the Department of Biomedicine, Pharmacology at Aarhus University in Aarhus, Denmark. “Ultimately, we hope to find new cellular targets, leading to the development of new anti-cancer drugs which might help to treat those tumors that prove to be non-responsive to the currently employed agents.”

To make their discovery, Grimm and colleagues used the Science in Microgravity Box (SIMBOX) experimental facility aboard Shenzhou-8, which was launched on October 31, 2011. Cell feeding was automatically performed in space on day five and automated cell fixation was conducted on day 10. Inflight control was achieved by using a centrifuge in space. On November 17, 2011, Shenzhou-8 landed and the experimental samples were analyzed.

Additional cells were analyzed using a random positioning machine which aims to achieve simulated microgravity conditions on the ground by rotating a sample around two axes operated in a random real direction mode. Both cell types were investigated with respect to their gene expression and secretion profiles, employing modern molecular biological techniques, such as whole genome microarrays and multi-analyte profiling. Results suggested that the expression of genes indicating a high malignancy in cancer cells may be down-regulated under altered gravitational stimulation.

“We are just at the beginning of a new field of medicine that studies the effects of microgravity on cell and molecular pathology. Space flight affects our bodies, both for good and bad,” said Gerald Weissmann, M.D., Editor-in-Chief of The FASEB Journal. “We’ve known that microgravity can cause some microorganisms to become more virulent and that prolonged microgravity has negative effects on the human body. Now, we learn that it’s not all bad news: what we learn from cells in space should help us understand and treat malignant tumors on the ground.”