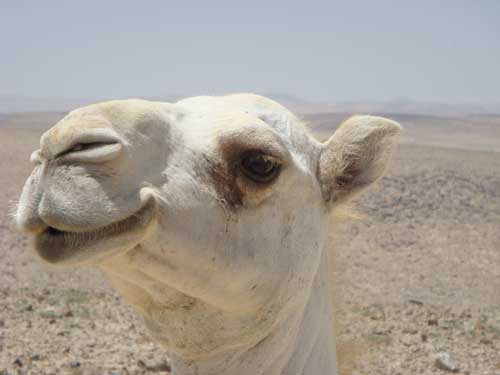 Camels are mentioned as pack animals in the biblical stories of Abraham, Joseph, and Jacob. But archaeologists have shown that camels were not domesticated in the Land of Israel until centuries after the Age of the Patriarchs (2000-1500 BCE). In addition to challenging the Bible’s historicity, this anachronism is direct proof that the text was compiled well after the events it describes.

Now Dr. Erez Ben-Yosef and Dr. Lidar Sapir-Hen of Tel Aviv University’s Department of Archaeology and Near Eastern Cultures have used radiocarbon dating to pinpoint the moment when domesticated camels arrived in the southern Levant, pushing the estimate from the 12th to the 9th century BCE. The findings, published recently in the journal Tel Aviv, further emphasize the disagreements between Biblical texts and verifiable history, and define a turning point in Israel’s engagement with the rest of the world.

“The introduction of the camel to our region was a very important economic and social development,” said Dr. Ben-Yosef. “By analyzing archaeological evidence from the copper production sites of the Aravah Valley, we were able to estimate the date of this event in terms of decades rather than centuries.”

Archaeologists have established that camels were probably domesticated in the Arabian Peninsula for use as pack animals sometime towards the end of the 2nd millennium BCE. In the southern Levant, where Israel is located, the oldest known domesticated camel bones are from the Aravah Valley, which runs along the Israeli-Jordanian border from the Dead Sea to the Red Sea and was an ancient center of copper production. At a 2009 dig, Dr. Ben-Yosef dated an Aravah Valley copper smelting camp where the domesticated camel bones were found to the 11th to 9th century BCE. In 2013, he led another dig in the area.

To determine exactly when domesticated camels appeared in the southern Levant, Dr. Sapir-Hen and Dr. Ben-Yosef used radiocarbon dating and other techniques to analyze the findings of these digs as well as several others done in the valley. In all the digs, they found that camel bones were unearthed almost exclusively in archaeological layers dating from the last third of the 10th century BCE or later — centuries after the patriarchs lived and decades after the Kingdom of David, according to the Bible. The few camel bones found in earlier archaeological layers probably belonged to wild camels, which archaeologists think were in the southern Levant from the Neolithic period or even earlier. Notably, all the sites active in the 9th century in the Arava Valley had camel bones, but none of the sites that were active earlier contained them.

The appearance of domesticated camels in the Aravah Valley appears to coincide with dramatic changes in the local copper mining operation. Many of the mines and smelting sites were shut down; those that remained active began using more centralized labor and sophisticated technology, according to the archaeological evidence. The researchers say the ancient Egyptians may have imposed these changes — and brought in domesticated camels — after conquering the area in a military campaign mentioned in both biblical and Egyptian sources.

Humping it to India

The arrival of domesticated camels promoted trade between Israel and exotic locations unreachable before, according to the researchers; the camels can travel over much longer distances than the donkeys and mules that preceded them. By the seventh century BCE, trade routes like the Incense Road stretched all the way from Africa through Israel to India. Camels opened Israel up to the world beyond the vast deserts, researchers say, profoundly altering its economic and social history.