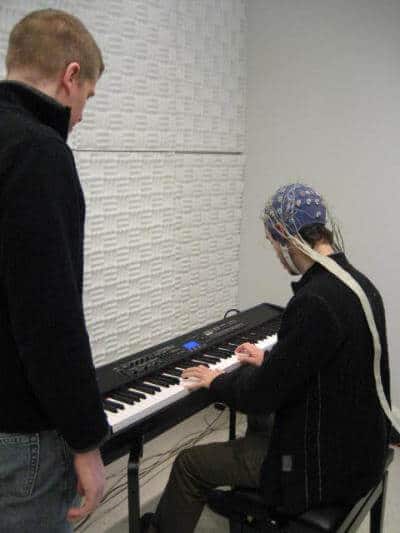 Research from McGill University reveals that the brain’s motor network helps people remember and recognize music that they have performed in the past better than music they have only heard. A recent study by Prof. Caroline Palmer of the Department of Psychology sheds new light on how humans perceive and produce sounds, and may pave the way for investigations into whether motor learning could improve or protect memory or cognitive impairment in aging populations. The research is published in the journal Cerebral Cortex.

“The memory benefit that comes from performing a melody rather than just listening to it, or saying a word out loud rather than just hearing or reading it, is known as the ‘production effect’ on memory”, says Prof. Palmer, a Canada Research Chair in Cognitive Neuroscience of Performance. “Scientists have debated whether the production effect is due to motor memories, such as knowing the feel of a particular sequence of finger movements on piano keys, or simply due to strengthened auditory memories, such as knowing how the melody tones should sound. Our paper provides new evidence that motor memories play a role in improving listeners’ recognition of tones they have previously performed.”

For the study, researchers recruited twenty skilled pianists from Lyon, France. The group was asked to learn simple melodies by either hearing them several times or performing them several times on a piano. Pianists then heard all of the melodies they had learned, some of which contained wrong notes, while their brain electric signals were measured using electroencephalography (EEG).

“We found that pianists were better at recognizing pitch changes in melodies they had performed earlier,” said the study’s first author, Brian Mathias, a McGill PhD student who conducted the work at the Lyon Neuroscience Research Centre in France with additional collaborators Drs. Barbara Tillmann and Fabien Perrin.

The team found that EEG measurements revealed larger changes in brain waves and increased motor activity for previously performed melodies than for heard melodies about 200 milliseconds after the wrong notes. This reveals that the brain quickly compares incoming auditory information with motor information stored in memory, allowing us to recognize whether a sound is familiar.

“This paper helps us understand ‘experiential learning’, or ‘learning by doing’, and offers pedagogical and clinical implications,” said Mathias, “The role of the motor system in recognizing music, and perhaps also speech, could inform education theory by providing strategies for memory enhancement for students and teachers.”

4 thoughts on “Play it again: How the brain recognizes familiar music”