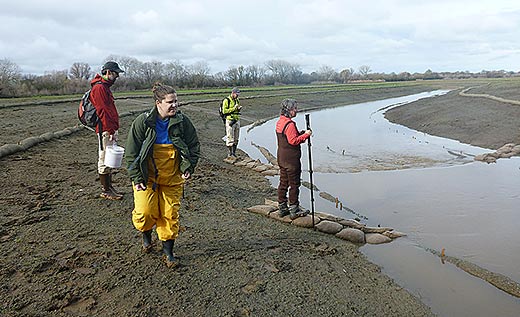 Strange as it sounds, flood control can be part of the solution to managing California’s droughts. University of California scientists have shown that making more room for floodwaters can improve the state’s groundwater supplies and fisheries.

Removing some levees or rebuilding aging ones some distance away from riverbanks can appreciably replenish aquifers during wet years, providing some relief during droughts.

Just a brief storm in early February added an estimated 100 to 300 acre-feet of water to underground stores, about three times more than the amount of recharge from irrigation.

The researchers removed levees adjacent to the river that were in risk of being overtopped, but contained floodwaters across a 500-acre floodplain with levees set far back from the river.

Preliminary results from the research project, now in its fourth year, come as the state steps up work to shore up levees in flood-prone areas. Gov. Jerry Brown last month signed drought emergency legislation that also advanced $660 million of Proposition 1E (2006) money for flood protection, including construction of “setback levees” — those that make room for floodwaters and groundwater recharge.

Setback levees are expensive. A 3,400-foot-long structure and associated riparian restoration planned along the lower Feather River in Sutter County is estimated at $20 million.

But such projects can bring multiple long-terms benefits. The researchers found that removing the Cosumnes’ levees not only refilled local groundwater supplies but also allowed row crops to persist on the floodplain and actually reduced flood risks for area landowners.

“In wetter years, it even improves the salmon fishery because the floodplain is like an incubator,” said UC Merced associate professor of environmental engineering Joshua Viers. “It provides the right food and water temperature for juvenile salmon. Spending time there helps them grow larger faster, gives them places to hide from predators so there are more of them, and improves their chances of survival once they reach the ocean.”

The project also included researchers from Washington State University and the California Department of Fish and Wildlife. It received funding through The Nature Conservancy.