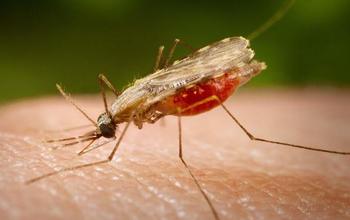 Malaria, one of the world’s deadliest diseases, kills hundreds of thousands of people every year, spreading through a devastatingly effective cycle of incubation and transmission.

It starts when a female anopheles mosquito infected with a malaria parasite bites someone, injecting the single-celled parasite into the victim’s blood. The parasite invades that human’s liver cells, maturing, multiplying and moving into the bloodstream, making that person sick. When other mosquitoes bite that person, they ingest the parasite, which infects them. About 10 days later, when an infected mosquito happens upon uninfected humans, the whole cycle begins again.

It’s a cycle that occurs throughout the year in densely populated areas, leaving nearly half the people in the world vulnerable to infection. Roughly 200 million people contracted malaria in 2013, according to the World Health Organization. More than a quarter of them died–mostly children in Africa.

But what if there were a way to break that cycle?

Research by Jun Li, a University of Oklahoma biochemistry professor, could pave the way for a method to do just that. Through his work studying genetic changes in natural populations of mosquitoes, supported by the National Science Foundation’s (NSF) Biological Sciences Directorate, Li has been able to isolate a mosquito protein critical to the malaria parasite’s life cycle. That finding could one day lead to a treatment that doesn’t affect just individuals, but entire communities by blocking the transmission of the disease.

“You won’t be a source of malaria,” Li said. “Think about this in the context of in a village, a city or the whole world. Your one shot could actually contribute to the reduction, or even elimination, of malaria.”

Li, whose work is supported by NSF, the National Institutes of Health and the Oklahoma Center for the Advancement of Science, has had plenty of opportunities to think about the effects malaria can have on a community. Malaria’s a fact of daily life in some of the most heavily populated areas of the world outside of the United States and Europe, he notes.

Those areas include his home in China–and Li knows well what malaria can do to a person.

“I suffered from malaria when I was a kid,” he said. “When I was sick, I had almost no energy to stand. When I graduated with a Ph.D. and had a chance to study malaria, it was inspiring. It was a chance to work against this deadly disease.”

Li’s research sought to clarify a critically important question about malaria: How does the parasite interact with the host mosquitoes carrying it? What he found was a protein that serves an important function in malaria’s lifespan–it allows the parasite to invade the insects’ bodies.

“The mosquito is an organism. The parasite is also a pathogen,” Li said. “Of course, when the parasite enters the mosquito by ingestion, there should be mechanisms through which the mosquito’s system tries to prevent infection. But this protein actually acts like an anchor to help the parasite penetrate the physical barrier in mosquito guts.”

He and his collaborators found the protein by collecting data from mosquitoes in Africa, along with blood from people infected with malaria. The researchers then fed that blood to mosquitoes, analyzing the rate at which the parasite multiplied in their bodies while also examining the insects’ genotypes.

They found a particular protein, known as FREP1, in the part of mosquitoes’ digestive systems known as the “midgut” makes the insects more susceptible to invasion by the parasite. Once the parasite gets into a mosquito, it multiplies.

“It is very important to note that the malaria has to infect the mosquito first before they can infect humans,” Li said. “This protein is what allows that to happen.”

Identifying that protein is a big step for Li and his collaborators. Now that they know the role it plays in spreading malaria, they can work on ways to use it to block transmission of the disease. Li says that such a treatment could involve injecting people with the mosquito protein. That patient would then generate an antibody against the protein. Any mosquito that bit the patient afterward would ingest the antibody–which would prevent the malaria parasite from taking hold in the mosquito’s body.

“Your body becomes a dead end for the parasite,” Li said, “and the community is protected.”

Li is now collecting more data in Africa to support his work, and verifying that the protein plays the same role in multiple strains of malaria. He’s hoping his research could help halt the transmission of a disease that he has a personal stake in stopping.

“When I’m working on this research, it’s not just because it’s my scientific interest,” he said. “It actually will help keep millions of people healthy.”

1 thought on “Breaking the cycle of malaria transmission”