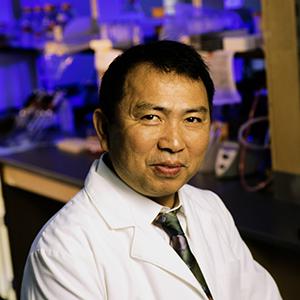 A molecule produced during fasting or calorie restriction has anti-aging effects on the vascular system, which could reduce the occurrence and severity of human diseases related to blood vessels, such as cardiovascular disease, according to a study led by Georgia State University.

“As people become older, they are more susceptible to disease, like cancer, cardiovascular disease and Alzheimer’s disease,” said Dr. Ming-Hui Zou, senior author of the study, director of the Center for Molecular and Translational Medicine at Georgia State and a Georgia Research Alliance Eminent Scholar in Molecular Medicine. “Age is the most important so-called risk factor for human disease. How to actually delay aging is a major pathway to reducing the incident and severity of human disease.

“The most important part of aging is vascular aging. When people become older, the vessels that supply different organs are the most sensitive and more subject to aging damage, so studying vascular aging is very important. This study is focused on vascular aging, and in old age, what kind of changes happen and how to prevent vascular aging.”

In this study, the research team explores the link between calorie restriction (eating less or fasting) and delaying aging, which is unknown and has been poorly studied. The findings are published in the journal Molecular Cell.

The researchers identified an important, small molecule that is produced during fasting or calorie restriction conditions. The molecule, β-Hydroxybutyrate, is one type of a ketone body, or a water-soluble molecule that contains a ketone group and is produced by the liver from fatty acids during periods of low food intake, carbohydrate restrictive diets, starvation and prolonged intense exercise.

“We found this compound, β-Hydroxybutyrate, can delay vascular aging,” Zou said. “That’s actually providing a chemical link between calorie restriction and fasting and the anti-aging effect. This compound can delay vascular aging through endothelial cells, which line the interior surface of blood vessels and lymphatic vessels. It can prevent one type of cell aging called senescence, or cellular aging.”

Senescent cells can no longer multiple and divide. The researchers found β-Hydroxybutyrate can promote cell division and prevent these cells from becoming old. Because this molecule is produced during calorie restriction or fasting, when people overeat or become obese this molecule is possibly suppressed, which would accelerate aging.

In addition, the researchers found when β-Hydroxybutyrate binds to a certain RNA-binding protein, this increases activity of a stem cell factor called Octamer-binding transcriptional factor (Oct4) in vascular smooth muscle and endothelial cells in mice. Oct4 increases a key factor against DNA damage-induced senescence, which can keep blood vessels young.

“We think this is a very important discovery, and we are working on finding a new chemical that can mimic the effect of this ketone body’s function,” Zou said. “We’re trying to take the global approach to reducing cardiovascular disease and Alzheimer’s disease. It’s difficult to convince people not to eat for the next 24 hours to increase the concentration of this compound (β-Hydroxybutyrate), and not everybody can do that, but if we can find something that can mimic this effect and people can still eat, it would make life more enjoyable and help fight disease.

“This stem cell factor (Oct4) could be a pharmaceutical or pharmacological target for slowing down or preventing aging. Then, if the vascular system becomes younger, it is less likely to have cardiovascular disease, Alzheimer’s disease and cancer because all of these diseases are age-related.”

In the future, the researchers would like to target senescent cells with the goal of eliminating them and rejuvenating the vascular system to prevent cardiovascular disease.