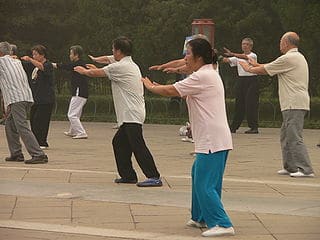 A randomized controlled trial found that tai chi is about as effective as conventional exercise for reducing waist circumference in middle-aged and older adults with central obesity. Central obesity, or weight carried around the midsection, is a major manifestation of metabolic syndrome and a common health problem in this cohort. The findings are published in Annals of Internal Medicine.

Tai chi is a form of mind-body exercise often described as “meditation in motion.” It is practiced in many Asian communities and is becoming increasingly popular in Western countries, with more than 2 million people practicing it in the United States. While it is known to be a suitable activity for older people including those who are not active, there previously has been little evidence on tai chi’s health benefits.

Researchers from the University of Hong Kong randomly assigned more than 500 adults over 50 with central obesity to a regimen of tai chi, conventional exercise, or no exercise over 3 months. Participants in the tai chi and exercise groups met for instructor-led workouts for 1 hour 3 times a week for 12 weeks. The tai chi program consisted of the Yang style of tai chi, the most common style adopted in the literature, and the conventional exercise program consisted of brisk walking and strength training activities. Waist circumference and other indicators of metabolic health were measured at baseline, 12 weeks, and 38 weeks. The researchers found that both the tai chi intervention and conventional exercise intervention group had reductions in waist circumference, relative to control. The reduction in waist circumference had a favorable impact on HDL cholesterol, or so-called good cholesterol, but did not translate into detectable differences in fasting glucose or blood pressure.

According to the study authors, their findings are good news for middle-aged and older adults who have central obesity but may be averse to conventional exercise due to preference or limited mobility.