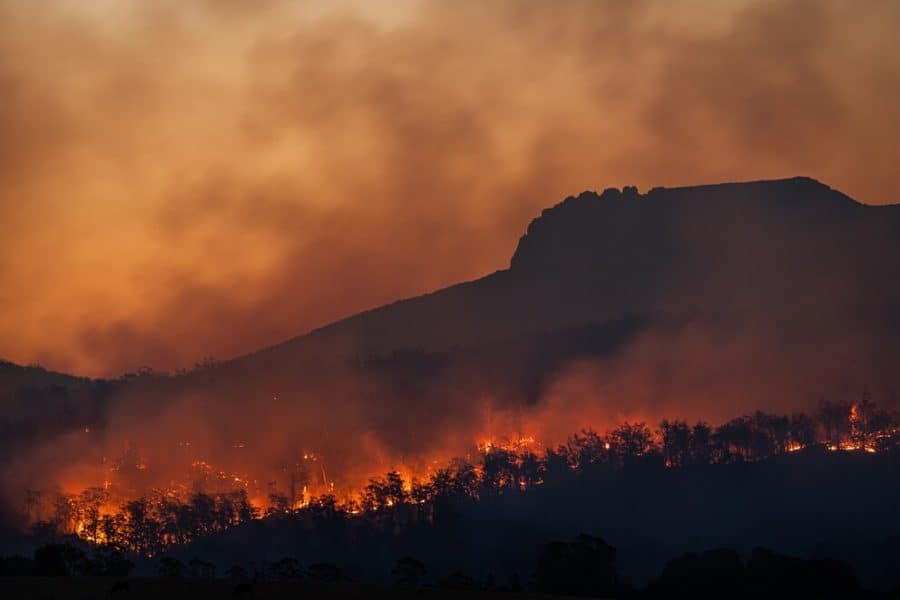 Researchers studied bushfire incidences from 2012 to 2020 within eastern Australia, and found that the severe megafires that occurred during 2019-20 were much larger and more concentrated across the landscape than in previous years. IMAGE: MATT PALMER, UNSPLASH

The severe megafires that occurred in eastern Australia during 2019-20 were much larger and more concentrated across the landscape than in previous years, according to a study by researchers at Penn State and the University of New South Wales. The unprecedented fires included the burning of 34% of the foraging habitat of grey-headed flying foxes, which are known to transmit deadly Lyssa and Hendra viruses.

“Fire is essential for maintaining biodiversity across ecosystems globally,” said Nita Bharti, assistant professor of biology, Penn State. “Yet, extensive high-intensity fires, which are increasing as a result of climate change, can harm biodiversity and ultimately threaten human health.”

In their study, which published on April 1 in Global Ecology and Conservation, Bharti and her colleagues studied bushfire incidences from 2012 to 2020 within the eastern Australian states of Queensland, New South Wales, Australian Capital Territory and Victoria, which together have the nation’s highest human population density, highest biodiversity and largest tracts of remaining forest habitats. Using incidence data from NASA’s Fire Information for Resource Management System, the researchers determined the total burned area, the number of unique fires, the proportion of area burned by “moderately-sized” fires (larger than 100 hectares) and the proportion of area burned by megafires (larger than 10,000 hectares) for each year. The scientists also used LANDSAT imagery to examine the amount of forested land that was present during each year.

The team found that during the 2019-20 bushfire season, 29,148 unique fires burned 8.03 million hectares, and many fires were an order of magnitude larger than previous fire seasons. Of these fires, 67 were megafires and were responsible for burning 62.5% of the total affected area, mostly in critical forested landscapes. In contrast, previous fire seasons were characterized by smaller, scattered fires in mostly savannahs and non-forested areas.

“Wildlife can often persist or relocate in smaller fires, but these larger fires are devastating in the short- and long-term for many species,” said Christina Faust, postdoctoral scholar, Center for Infectious Disease Dynamics, Penn State.

One affected species is the fruit- and nectar-dependent grey-headed flying fox (Pteropus poliocephalus), which is classified as “Vulnerable” due to previous habitat loss and human disturbances.

“Grey-headed flying foxes are important pollinators of native eucalypt forests and are helpful in restoring vegetation after fires,” said Kelsee Baranowski, graduate student in biology, Penn State. “But they can be dangerous when they occur near human populations because they are known to carry and transmit Lyssa virus and Hendra virus, both of which can be fatal in humans.”

“The death rate in humans for these viruses is high — nearly 100% for Lyssa and around 60% for Hendra — yet incidences of infection are currently rare,” Baranowski said.

To understand how the bushfires affected flying foxes, the team — which also included Peggy Eby, adjunct senior lecturer, University of New South Wales — examined the number of roosts, their locations, and their occupancies using data available through the National Flying Fox Monitoring Program. They also calculated the total foraging habitat, winter habitat and burned area for each roost. They defined winter habitat as those areas that contained the most annually reliable and productive nutritional resources during the winter.

Using data from a previous fire season, the team showed that the presence of grey-headed flying foxes at the roosts was significantly affected by the total unburned area of winter habitat, where roosts with more abundant unburned winter habitat were more likely to be occupied by bats at any time of year.

“The loss of these bats’ habitat is not only a threat to the preservation of biodiversity, but it also could drive the animals into urban environments, where they would be more likely to transmit the virus to humans,” said Baranowski. “Previous studies have proposed preserving and restoring critical resources to attract flying foxes away from human settlements to reduce risk of viral transmission.”

“The most important areas to monitor and preserve are unburned winter habitat near heavily impacted roosts, as these are now lifelines for displaced populations,” Baranowski said.

Faust noted that wildfires are likely to increase in severity and burn area as climate change occurs.

“Although this was a bad year, it’s not the worst year that will happen according to projections for Australia,” she said. “It is important to act now to replant critical species that the bats use as habitat and food, and to strategically join existing forest patches together to increase the overall habitat quality.”

COVID-19 is a prominent example of how habitat loss and other human-induced ecosystem disruptions can lead to wildlife viruses jumping into humans.

“Habitat loss was likely a factor contributing to SARS-CoV-2 making the leap into an intermediary species and then into humans,” said Bharti. “This process of zoonotic transmission has occurred many times throughout history, and we will continue to see it with increasing frequency as we further disrupt natural areas.”

The National Science Foundation, the Defense Advanced Research Projects Agency PREEMPT program and the Huck Institutes of the Life Sciences at Penn State supported this research.