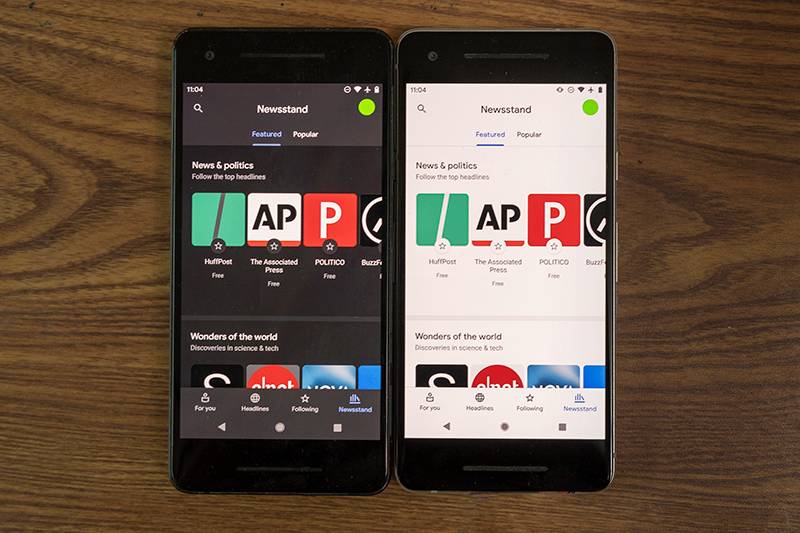 A new study reveals that dark mode doesn’t necessarily save much battery life. But there are a few ways that users can take better advantage of the feature, Purdue University researchers say. (Purdue University photo/John Underwood)

When Android and Apple operating system updates started giving users the option to put their smartphones in dark mode, the feature showed potential for saving the battery life of newer phones with screens that allow darker-colored pixels to use less power than lighter-colored pixels.

But dark mode is unlikely to make a big difference to battery life with the way that most people use their phones on a daily basis, says a new study by Purdue University researchers.

That doesn’t mean that dark mode can’t be helpful, though.

“When the industry rushed to adopt dark mode, it didn’t have the tools yet to accurately measure power draw by the pixels,” said Charlie Hu, Purdue’s Michael and Katherine Birck Professor of Electrical and Computer Engineering. “But now we’re able to give developers the tools they need to give users more energy-efficient apps.”

Based on their findings using these tools they built, the researchers clarify the facts about the effects of dark mode on battery life and recommend ways that users can already take better advantage of the feature’s power savings.

The study looked at six of the most-downloaded apps on Google Play: Google Maps, Google News, Google Phone, Google Calendar, YouTube and Calculator. The researchers analyzed how dark mode affects 60 seconds of activity within each of these apps on the Pixel 2, Moto Z3, Pixel 4 and Pixel 5.

Even though Hu’s team studied only Android apps and phones, their findings might have similar implications for Apple phones, starting with the iPhone X. The team recently presented this work at MobiSys 2021, a conference by the Association for Computing Machinery.

Smartphones that came out after 2017 likely have an OLED (organic light-emitting diode) screen. Because this type of screen doesn’t have a backlight like the LCD (liquid crystal display) screens of older phones, the screen will draw less power when displaying dark-colored pixels. OLED displays also allow phone screens to be ultrathin, flexible and foldable.

But the brightness of OLED screens largely determines how much dark mode saves battery life, said Hu, who has been researching ways to improve the energy efficiency of smartphones since they first hit the market over a decade ago. The software tools that Hu and his team have developed are based on new patent-pending power modeling technology they invented to more accurately estimate the power draw of OLED phone displays.

Many people use their phone’s default auto-brightness setting, which tends to keep brightness levels around 30%-40% most of the time when indoors. At 30%-50% brightness, Purdue researchers found that switching from light mode to dark mode saves only 3%-9% power on average for several different OLED smartphones.

This percentage is so small that most users wouldn’t notice the slightly longer battery life. But the higher the brightness when switching from light mode to dark mode, the higher the energy savings.

Scenario 1: Switching from light mode to dark mode on a sunny day

Let’s say that you’re using your OLED phone in light mode while sitting outside watching a baseball game on a bright and sunny day. If your phone is set to automatically adjust brightness levels, then the screen has probably become really bright, which drains battery life.

The Purdue study found that switching from light mode to dark mode at 100% brightness saves an average of 39%-47% battery power. So turning on dark mode while your phone’s screen is that bright could allow your phone to last a lot longer than if you had stayed in light mode.

Other tests done by the industry haven’t analyzed as many apps or phones as Hu’s team did to determine the effects of dark mode on battery life – and they were using less accurate methods.

“Tests done in the past to compare the effects of light mode with dark mode on battery life have treated the phone as a black box, lumping in OLED display with the phone’s other gazillion components. Our tool can accurately isolate the portion of battery drain by the OLED display,” said Pranab Dash, a Purdue Ph.D. student who worked with Hu on the study.

Scenario 2: Using dark mode to go easier on your eyes without draining your phone’s battery faster

Using the Google News app in light mode at 20% brightness on the Pixel 5, for example, draws the same amount of power as when the phone is at 50% brightness in dark mode.

So if looking at your phone in dark mode is easier on your eyes, but you need the higher brightness to see better, you don’t have to worry about this brightness level taking more of a toll on your phone’s battery life.

Hu and his team built a tool that app developers can use to determine the energy savings of a certain activity in dark mode as they design an app. The tool, called a Per-Frame OLED Power Profiler (PFOP), is based on the more accurate OLED power model that the team developed. The Purdue Research Foundation Office of Technology Commercialization has applied for a patent on this power modeling technology. Both PFOP and the power modeling technology are available for licensing.

Fact: Your phone doesn’t accurately measure battery usage by the app – yet

The feature can give you a rough idea of the most power-hungry apps, but Hu and Dash found that Android’s current “Battery” feature is oblivious to content on a screen, meaning it doesn’t consider the impact of dark mode on power consumption.

Hu’s team has developed a more accurate way to calculate battery consumption by the app for Android, and actually used the tool to make the study’s findings about how much power dark mode saves at certain brightness levels. Unlike Android’s current feature, this new tool takes into account the effects of dark mode on battery life.

The tool, called Android Battery+, is expected to become available to platform vendors and app developers in the coming year.

For more information on the researchers’ technology available for licensing, please contact Matthew Halladay at mrhalladay@prf.org and include the track code 2021-HU-69505.

How much battery does dark mode save? An accurate OLED display power profiler for modern smartphones

By omitting external lighting, OLED display significantly reduces the power draw compared to its predecessor LCD and has gained wide adoption in modern smartphones. The real potential of OLED in saving phone battery drain lies in exploiting app UI color design, i.e., how to design app UI to use pixel colors that result in low OLED display power draw. In this paper, we design and implement an accurate per-frame OLED display power profiler, PFOP, that helps developers to gain insight into the impact of different app UI design on its OLED power draw, and an enhanced Android Battery that helps phone users to understand and manage phone display energy drain, for example, from different app and display configurations such as dark mode and screen brightness. A major challenge in designing both tools is to develop an accurate and robust OLED display power model. We experimentally show that linear-regression-based OLED power models developed in the past decade cannot capture the unique behavior of OLED display hardware in modern smartphones which have a large color space and propose a new piecewise power model that achieves much better modeling accuracy than the prior-art by applying linear regression in each small regions of the vast color space. Using the two tools, we performed to our knowledge the first power saving measurement of the emerging dark mode for a set of popular Google Android apps.