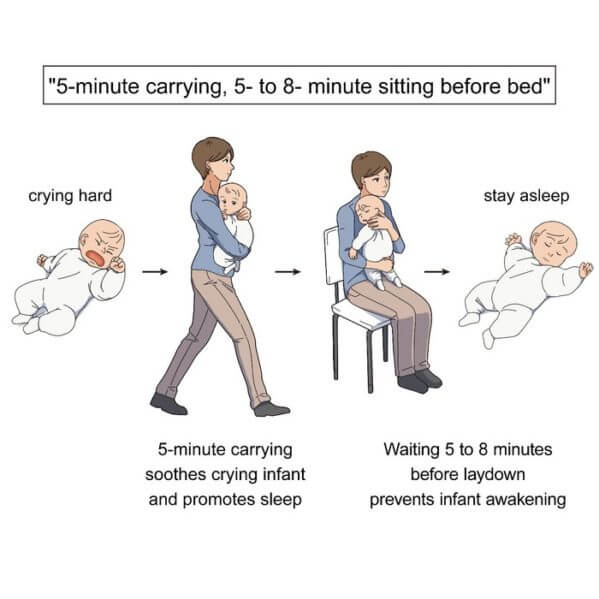 Most parents have experienced frustration when their infants cry excessively and refuse to sleep. Scientists have found that the best strategy to calm them down is by holding and walking with them for five minutes. This evidence-based soothing strategy is presented in a paper published September 13 in the journal Current Biology.

“Many parents suffer from babies’ nighttime crying,” says corresponding author Kumi Kuroda of the RIKEN Center for Brain Science in Japan. “That’s such a big issue, especially for inexperienced parents, that can lead to parental stress and even to infant maltreatment in a small number of cases,” she says.

Kuroda and her colleagues have been studying the transport response, an innate reaction seen in many altricial mammals—those whose young are immature and unable to care for themselves—such as mice, dogs, monkeys, and humans. They observed that when these animals pick up their infants and start walking, the bodies of their young tend to become docile and their heart rates slow. Kuroda’s team wanted to compare the effects of the transport response, the relaxed reaction while being carried, with other conditions such as motionless maternal holding or rocking and also examine if the effects persist with longer carrying in human infants.

The researchers compared 21 infants’ responses while under four conditions: being held by their walking mothers, held by their sitting mothers, lying in a still crib, or lying in a rocking cot. The team found that when the mother walked while carrying the baby, the crying infants calmed down and their heart rates slowed within 30 seconds. A similar calming effect occurred when the infants were placed in a rocking cot, but not when the mother held the baby while sitting or placed the baby in a still crib.

This suggests that holding a baby alone might be insufficient in soothing crying infants, contradicting the traditional assumption that maternal holding reduces infant distress. At the same time, movement has calming effects, likely activating a baby’s transport response. The effect was more evident when the holding and walking motions continued for five minutes. All crying babies in the study stopped crying, and nearly half of them fell asleep.

But when the mothers tried to put their sleepy babies to bed, more than one-third of the participants became alert again within 20 seconds. The team found that all babies produced physiological responses, including changes in heart rate, that can wake them up the second their bodies detach from their mothers. However, if the infants were asleep for a longer period before being laid down, they were less likely to awaken during the process, the team found.

“Even as a mother of four, I was very surprised to see the result. I thought baby awoke during a laydown is related to how they’re put on the bed, such as their posture, or the gentleness of the movement,” Kuroda says.  “But our experiment did not support these general assumptions.” While the experiment involved only mothers, Kuroda expects the effects are likely to be similar in any caregiver.

Based on their findings, the team proposes a method for soothing and promoting sleep in crying infants. They recommend that parents hold crying infants and walk with them for five minutes, followed by sitting and holding infants for another five to eight minutes before putting them to bed. The protocol, unlike other popular sleep training approaches such as letting infants cry until they fall asleep themselves, aims to provide an immediate solution for infant crying. Whether it can improve infant sleep in the long-term requires further research, Kuroda says.

“For many, we intuitively parent and listen to other people’s advice on parenting without testing the methods with rigorous science. But we need science to understand a baby’s behaviors, because they’re much more complex and diverse than we thought,” Kuroda says.

This research was supported by RIKEN Center for Brain Science and the Japan Society for the Promotion of Science.