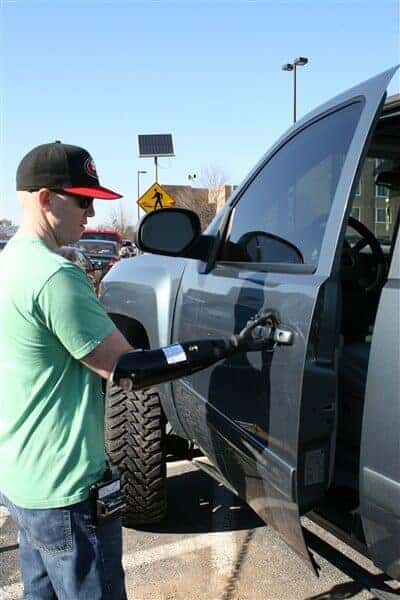 After years of intense research and support from Defense Department agencies and a private foundation, a Marine who lost his right hand in Afghanistan is testing new technology that could change everything in the years ahead for someone who loses a limb.

The implantable myoelectric sensor system, or IMES, was developed by the California-based Alfred E. Mann Foundation.

Now in clinical trials for Food and Drug Administration approval, thanks to 31-year-old Marine Corps Staff Sgt. James Sides, the system lets a patient with sensors, or electrodes, implanted into forearm muscles intuitively control the movements of a prosthetic hand.

“Signals come from the brain, down through the spinal cord, out through the peripheral nerves and into the muscles,” said Dr.  Paul F. Pasquina, a physician and chairman of the Department of Physical Medicine and Rehabilitation at the Uniformed Services University of the Health Sciences and director of the university’s Center for Rehabilitation Sciences Research.

Those signals are helped along by a wireless communication scheme that modulates a magnetic field generated by a coil laminated in the wall of the prosthetic arm, Pasquina said. Reverse telemetry, an automated communications process, is used to transfer data from the implanted sensor to external electronics, and forward telemetry is used to transmit power and settings to the sensors, he added.

Each implantable sensor is a custom-designed integrated circuit packaged in a tiny biocompatible capsule.

“We owe it to our injured service members and their families to not just provide state-of-the-science care today to plan for the future as well, and we saw that there were limitations to what we had to offer,” Pasquina said during a recent interview with American Forces Press Service and the Pentagon Channel.

“There’s been a lot of work to figure out how to create implantable electrodes and transmit these signals outside the body,” Pasquina added, noting that a partner in the effort is the Alfred Mann Foundation, established in 1985 to bridge basic medical research and create technologies for those in greatest need.

“[We’ve also] received support from the Uniformed Services University, Walter Reed and the Department of Defense … to have a young Marine be the first person in the world to receive this type of technology,” he said. “We are extremely encouraged with the results so far.”

The Marine, an explosive ordnance disposal specialist, was injured in July 2012 while examining an improvised explosive device. It was his fifth deployment in nearly 12 years as a Marine, his second to Afghanistan.

The patrol got to the site and sent the detection dog out, Sides said. The dog noticed something, so the patrol ran a robot down to pull the power pack and the initiation device out of the ground. They were going to try to uncover the main charge to place their own charge when the robot stopped working. Several attempts to restart it failed.

“At this point, we’d already been on scene a while, and we were like, ‘All right, we know pretty much where it’s at. I’m going to go down, get a quick look at the corner of it to see how big it is and the color, place my charge, and we’ll make it go away so we can go home,’” Sides said.

“I got down and was down there for a couple of seconds and that’s when it went off,” he continued. “I remember digging in the dirt and then I’m on my left side, ears are ringing, dusty cloud, and I was confused. Then I realized what had happened. I yelled some obscenities, and then I yelled for help to let them know I was breathing and awake.”

The EOD specialist was lying on his left side with his right hand behind his back. He felt fine, he said, and could see his legs, so he thought he’d try to get up.

“I went to move my arm, and it wouldn’t move,” he said. “I moved my shoulder, and my arm flopped over. My forearm was at a 30-degree angle, and then I could see that my hand was shredded to my wrist. And I was like, ‘Ah, that’s probably not good.’”

Ten months later, Sides was at Walter Reed with an amputated hand and wrist. His prostheticist told him about the IMES program, and a week later, the Marine met with Pasquina. Sides had the IMES surgery last June.

Until now, the state of the art for using electrodes to control prosthetic hands involved embedding two electrodes in the socket of the prosthetic arm and positioning them to touch the skin surface.

“The problem with surface electrodes,” Pasquina said, “is that you’re limited to … superficial muscles, and not the deeper muscles that control hand motion. But also, if the socket rotates or there’s fluid on the skin, you lose those electrical impulses and the arm becomes dysfunctional.”

Many of the muscles that control hand function still exist in the forearm, he said — for example, those that rotate the wrist in and out, open and close the hand, and flex and extend the thumb.

“We knew if we could somehow tap into the muscles in the forearm, not only would you be able to control each of those independent movements, you’d be able to do it much more intuitively,” Pasquina added.

With his robotic hand and six of the eight implanted electrodes, Sides simply thinks about opening or closing his hand, moving his thumb or rotating his wrist to make it happen. He can even shake hands with people, easily creating a firm grip.

Sides’ prosthetic uses six of the eight electrodes, and Pasquina said they could tap into the extra two tomorrow if they had a hand that would allow more activities, such as bending the wrist back and forth.

“Prosthetic companies have been limited in what they can develop, because until now there’s been no way to control all these advanced degrees of freedom,” Pasquina said. “Right now, for example, all that exist are prosthetics that allow rotation and hand opening and closing. We had to reengineer this prosthesis to allow volitional thumb movement, … and right now there’s no technology that allows wrist extension and flexion.” IMES technology and other advances will push the prosthetics industry forward, he added.

And in 2010, DARPA created the Reliable Neural-Interface Technology program, or RE-NET, to develop the kind of high-performance neural interfaces needed by advanced prosthetic limbs to reliably extract information from the nervous system. The idea, Pasquina said, is to develop more sophisticated robotics and introduce the systems as prosthetics to make a user’s control of the systems more natural and intuitive.

“We’re interested in developing technology that’s not going to help one or two injured service members. … We want this technology to help all individuals with limb loss,” he added, noting that he and his colleagues have submitted a grant request to DOD to expand the IMES technology to people with lower-limb loss.

“We did a ton of preliminary research, we’ve gone through the process with the FDA, and the engineers from the Alfred Mann Foundation have been incredible in terms of looking at the safety of this technology,” Pasquina said. “So we were all fairly confident this would be successful. But without somebody like [Staff Sergeant] Sides, it would still be an experiment, as opposed to something that can really help an individual.”

Pasquina said his group already has identified the second patient to receive the new arm.

“[He] is already anxious to get the surgery scheduled and get these implants,” he added. “We have a very methodological way of going about this, so we’ve already done the preoperative screening and testing. We anticipate that we’ll be performing the surgery this month.”