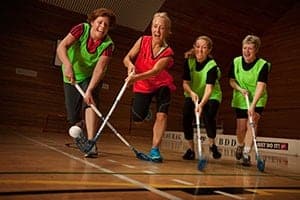 When women enter menopause, their oestrogen levels taper. This increases their risk of cardiovascular disease. New research from University of Copenhagen shows that interval-based team sport can make up for this oestrogen loss as it improves their conditions, reduces blood pressure and thereby protects the cardiovascular system.

While aging and an array of physical transformations go hand in hand for all, menopause has a significant influence on physical changes in women.

Oestrogen, the primary female sex hormone, is an important guardian of the female vascular system. Thus, as oestrogen levels fall during menopause, the risks of increased blood pressure and development of cardiovascular disease increases.

A new study by the University of Copenhagen’s Centre for Team Sport and Healthdocuments and addresses the issue.

Changes to the cardiovascular system occur soon after menopause

“Results demonstrate that blood pressure among post-menopausal women is 10% higher immediately after menopause than in similarly-aged, pre-menopausal women. They also had higher levels of an early marker for arteriosclerosis,” explains postdocMichael Nyberg.

The new aspect of this study is that researchers have investigated the effects of oestrogen in women of the same age, both before and after menopause. Previous studies didn’t look at similarly aged pre- and post-menopausal women. Instead, they investigated women with 15-20 year gaps in age. Therefore, they were unable to determine whether changes were due to age or oestrogen loss.

Results of the recent study have now been published in the esteemed journal, The American Journal of Physiology.

In a bid to prevent increased risk of cardiovascular disease, the study examined the effect of 12-week floorball training among post-menopausal women.

The results were clear.

“Following just 12 weeks of twice weekly practices, the women’s conditions had improved and their blood pressure was reduced by 4 mmHg (*), which correlates with a 40% lower risk of stroke,” explains Professor and Centre Director Jens Bangsbo.

Continuing, Bangsbo asserts that, “Furthermore, there was a positive development in relation to levels of substances vital to blood vessel function, including a 20% decrease in markers associated with arteriosclerosis.”

“The results demonstrate that team sports that include interval exercise are a fantastic opportunity for hormone treatment, in relation to oestrogen, because one can avoid an array of undesirable side-effects,” according to postdoc, Michael Nyberg.

“Another advantage of a team sport like floorball is that participants have fun. That’s important, because when a person is engaged in a team sport, they aren’t preoccupied with the otherwise intense exercise in which they are engaged. Floorball training is intense, with many short sprints, directional changes and a high pulse achieved – but participants don’t really pay attention to all of this. This high intensity is one of the primary reasons that these women were able to achieve such great health benefits in just 12 weeks,” explains Nyberg.

“The fact that participants thought that it was fun and enjoyed being with other women also lead to their insistence on continuing with the sport after the study’s conclusion – which addresses a fundamental issue: How is it possible to motivate and not least, keep people interested in a healthy physical activity. Team sport is the answer,” adds Jens Bangsbo.

Thirteen pre-menopausal women took part in the study, as well as 10 recently post-menopausal women. Participants were between 45 and 55-years-old, with an average age of 48 and 51 for the respective groups. All of the women were tested before and after the 12-week training period, during which they played floorball twice a week.

An abstract of the article can be accessed at:http://www.ncbi.nlm.nih.gov/pubmed/24477543