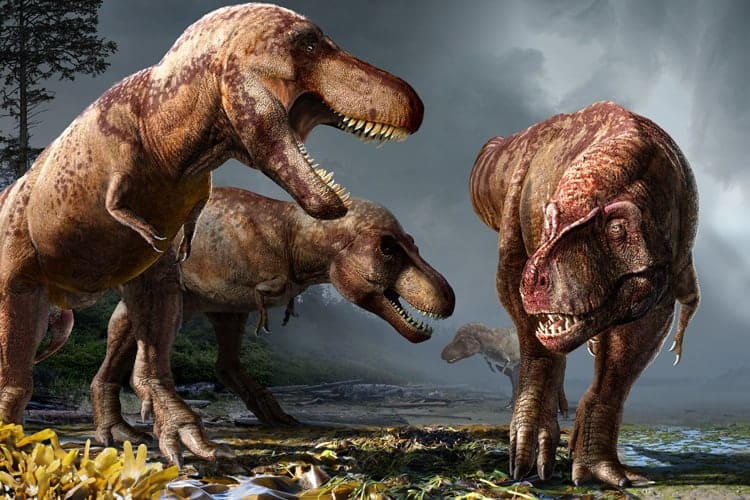 Jack Tseng loves bone-crunching animals — hyenas are his favorite — so when paleontologist Joseph Peterson discovered fossilized dinosaur bones that had teeth marks from a juvenile Tyrannosaurus rex, Tseng decided to try to replicate the bite marks and measure how hard those kids could actually chomp down.

Last year, he and Peterson made a metal replica of a scimitar-shaped tooth of a 13-year-old juvie T. rex, mounted it on a mechanical testing frame commonly used in engineering and materials science, and tried to crack a cow legbone with it.

Based on 17 successful attempts to match the depth and shape of the bite marks on the fossils — he had to toss out some trials because the fresh bone slid around too much — he determined that a juvenile could have exerted up to 5,641 newtons of force, somewhere between the jaw forces exerted by a hyena and a crocodile.

Previous bite force estimates for juvenile T. rexes — based on reconstruction of the jaw muscles or from mathematically scaling down the bite force of adult T. rexes — were considerably less, about 4,000 newtons. Jack Tseng measuring punctures produced in a cow bone by a metal cast of a tyrannosaur tooth. (UC Berkeley photo by Juan Liu)

Why does it matter? Bite force measurements can help paleontologists understand the ecosystem in which dinosaurs — or any extinct animal — lived, which predators were powerful enough to eat which prey, and what other predators they competed with.

“If you are up to almost 6,000 newtons of bite force, that places them in a slightly different weight class,” said Tseng, UC Berkeley assistant professor of integrative biology. “By really refining our estimates of juvenile bite force, we can more succinctly place them in a part of the food web and think about how they may have played the role of a different kind of predator from their larger, adult parents.”

The study reveals that juvenile T. rexes, while not yet able to crush bones like their 30- or 40-year-old parents, were developing their biting techniques and strengthening their jaw muscles to be able do so once their adult teeth came in.

“This actually gives us a little bit of a metric to help us gauge how quickly the bite force is changing from juvenile to adulthood, and something to compare with how the body is changing during that same period of time,” said Peterson, a professor at the University of Wisconsin in Oshkosh and a paleopathologist — a specialist on the injuries and deformities visible in fossil skeletons. “Are they already crushing bone? No, but they are puncturing it. It allows us to get a better idea of how they are feeding, what they are eating. It is just adding more to that full picture of how animals like tyrannosaurs lived and grew and the roles that they played in that ecosystem.”

Tseng, Peterson and graduate student Shannon Brink of East Carolina University in Greenville, North Carolina, will publish their findings this week in the journal PeerJ.

Teeth marks galore, but who was the biter?

Experiments using metal casts of dinosaur teeth to match observed bite marks are rare, not because bite marks on dinosaur fossils are rare, but because the identity of the biter is seldom clear. An artist’s depiction of a young Tyrannosaurus rex, about 13 years old, chewing on the tail of an Edmontosaurus, a plant-eating, duckbill dinosaur of the late Cretaceous Period. The teeth punctures left in the bone, which the youngster probably scavenged, allowed scientists to estimate the bite force that juvenile tyrannosaurs could exert. (Sketch by Brian Engh)

Two dinosaur fossils that Peterson excavated years earlier from the Hell Creek Formation of eastern Montana, however, proved ideal for such an experiment. One, the skull of a juvenile T. rex, had a healed bite mark on its face. “What, other than another T. rex, would be able to chomp another T. rex and puncture its skull?” he reasoned. Tyrannosaurs, like crocodiles today, played rough, and the wound was likely from a fight over food or territory.

In addition, the puncture holes in the skull, which had healed, were the size and shape of juvenile T. rex teeth, and the spacing fit a juvenile’s tooth gap. Juvenile T. rexes have teeth that are oval in cross section: more knife-like, presumably to cut and tear flesh. Adult T. rexes have teeth with round cross sections: more like posts, to crush bone. Both juveniles and adults could replace lost or broken teeth from spares buried in the jaw that emerged once the socket was empty.

One fossil discovered by Joseph Peterson — the skull of a young tyrannosaur — had four punctures presumably inflicted by another juvenile T. rex. The researchers tried to replicate these puncture marks in the lab to estimate how hard the biter clamped down to make the punctures. (Photos courtesy of Joseph Peterson)

Because skull bone is harder than other bone, Peterson said, matching these holes with punctures made by the metal tooth in a cow bone provided an upper limit to the bite force.

The other fossil was a tail vertebra from a plant-eating, duckbilled dinosaur, an Edmontosaurus. It had two puncture marks from teeth that matched those of a juvenile T. rex. Peterson said that T. rex was the only predator around at that time — the late Cretaceous Period, more than 66 million years ago — that could have bitten that hard on the tailbone of a duckbill. The juvenile likely punctured the bone when chomping down on a meaty part of the tail of the already dead animal.

Because vertebrae are softer, experimentally creating similar punctures in a cow bone gave the researchers a lower limit on bite force.

Tseng employed a testing technique that was used in 2010 by researchers who measured the bite force of a much older and smaller dinosaur from the early Cretaceous: a Deinonychus, made famous under a different name — Velociraptor — in the 1993 movie Jurassic Park. Its bite force was between 4,000 and 8,000 newtons. Tseng, then at the University at Buffalo in New York, and Peterson made a replica of a juvenile T. rex tooth from the middle of the jaw using a dental-grade cobalt chromium alloy, which is much harder than dinosaur tooth enamel, Tseng said.

They then mounted the metal tooth in a mechanical testing frame and pushed it slowly, at a millimeter per second, into a fresh-frozen and thawed humerus of a cow. Bones are easier to fracture at low speed than with a rapid chomp. Because the middle of the humerus has a thicker cortex than the bone near the joint ends, the middle was used to replicate the facial punctures. The ends were used to simulate the vertebra punctures.

“What we did, an actualistic study, is to say, ‘Let’s actually stab the thing with a tooth and see what it does,’” Peterson said. “What we are finding is that our estimates are slightly different than other models, but they are within a close enough range — we are on the same page.”

Tseng emphasized that there is no one number describing the bite force of any animal: it depends on how the creature bites and adjusts the prey in its mouth for the best leverage.

“They probably were not just chomping down. If you look at modern predators, even reptilian predators, sometimes there is adjustment. Maybe they are finding the most mechanically advantageous place, or the strongest tooth to make their bite,” said Tseng, who is a 2004 graduate of UC Berkeley’s Department of Integrative Biology and an assistant curator in the University of California Museum of Paleontology. “Presumably, there is some tuning involved before they make that bite, so they can literally take the best bite forward to make that kill or to damage whatever they are trying to get into.”

Nevertheless, the measurements are a start in charting the increase in tyrannosaurs’ bite force as they mature, similar to how paleontologists have charted T. rex size and weight with age. The researchers made a metal replica of a tooth from the middle of the jaw of a juvenile T. rex and slowly pressed it into a cow bone to simulate the puncture bite found in the fossilized tail vertebra of a duckbill dinosaur that died at the end of the Cretaceous Period. (UC Berkeley photo by Jack Tseng)

“Just as you can do a growth curve for such an organism, you can also do a strength curve for their bite force — what was their bite force at 12 or 13 years old, what was it at 30, 35 or 40 years old. And what does that potentially mean about the role that those animals played in that ecosystem at the time?” Peterson said. “What’s cool about finding bite marks in bone from a juvenile tyrannosaur is that it is tells us that at 13 years old, they weren’t capable of crushing bone yet, but they were already trying, they were puncturing bone, pretty deep. They are probably building up their strength as they get older.”

Tseng, whose primary interest is mammals, is eager to resume studies interrupted by the pandemic to measure the bite force of various living and extinct animals in order to infer the ecosystem niches of predators no longer alive. For those creatures, fossils are all that paleontologists have, in order to “interpret behavior and breathe some life into these extinct animals,” said Peterson.

“I use a biomechanical lens when I look at everything, living or extinct,” Tseng added. “Ecologists today studying food webs and ecosystems don’t rely much on bones; they have physical animals and plants. It is really the paleontologists who are interested in this approach, because the majority of what we have to study are bones and bite marks.”