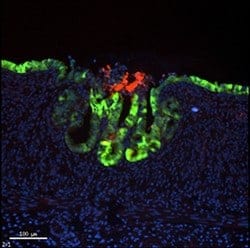 They are treated with expensive medication that only dampens their symptoms, or have the affected part of the intestine removed surgically. Researchers at BRIC, University of Copenhagen, have led an international collaboration with the aim of developing a potential new treatment. Their research shows, that a set of unique immature stem cells can be grown and used as living patches in the inflamed intestine. The results are published in the journal Cell Stem Cell.

The cells that provide the surface of the intestine need constant replenishment due to the mechanical and physical nature of the process of digestion. These cells are replaced by continuously dividing stem cells. A team of international research groups, led by Kim Jensen from BRIC, University of Copenhagen and Cambridge University, has identified a unique population of immature intestinal stem cells, very different from stem cells in the adult intestines.

“The properties of these immature stem cells explain how the intestinal surface is capable of expanding almost exponentially on a daily basis during development. This enables the gut to be ready to absorb nutrients when we are born. This is also exciting from a clinical perspective, as we can isolate and grow these immature cells in the lab, and subsequently transplant them back into mouse models of inflammatory bowel disease. Here they support the repair of the damaged areas”, explains Kim Jensen.

In experimental studies, the researchers have successfully transplanted immature stem cell into the intestine of mice with inflammatory bowel disease. Here, the cells form a living patch, which helps heal the ulcers. The research team hopes that their results can be developed into an alternative treatment for patients with inflammatory bowel disease.

The researchers have identified the same immature stem cells in the foetal human intestine and have developed techniques to isolate and grow them in the laboratory. Their next step will be to transplant these human cells to mice with different intestinal disorders, as a first step to prove that the technique will work in humans.

“It is still too early to say when the first patients can benefit from our results. But if we succeed, it will have great importance for the many patients suffering from intestinal bowel disease”, says medical doctor Shiro Yui.

Until now, the main belief has been that inflammatory bowel diseases are caused by defects in the immune system. However, the newest research indicate that this is just part of the story and that the symptoms for many is due to defects in the intestinal surface cells.

Accordingly, Kim Jensen has gathered a team of strong Japanese, English and Danish scientists and medical doctors, who have contributed with their expertise in the development of stem cell culturing and transplantation techniques. The collaboration is a unique example of how interdisciplinary research can bring important results. As a part of the collaboration, the partnering institutions have exchanged personnel and Shiro Yui, a leading Japanese medical doctor, is currently doing a 2-year internship at Kim Jensen’s lab in Denmark.

“Japan is investing a lot in the development of stem cell therapies. I bring such expertise and collaborations to Denmark and Europe through my stay. Also, I will be trained in the investigation of basic biological stem cell functions, an area where Kim Jensen in an expert”, says Shiro Yui, who has just received the Danish Independent Research Council’s new fellowship Mobilex to support his research in Denmark.

The research is supported by a Lundbeck Foundation Fellowship, The Danish Independent Research Council, the MRC and the Wellcome Trust.