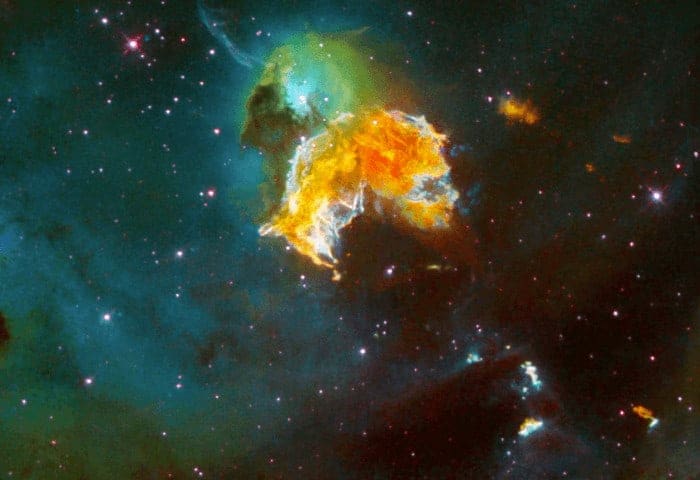 Research published in April provided “slam dunk” evidence of two prehistoric supernovae exploding about 300 light years from Earth. Now, a follow-up investigation based on computer modeling shows those supernovae likely exposed biology on our planet to a long-lasting gust of cosmic radiation, which also affected the atmosphere.

“I was surprised to see as much effect as there was,” said Adrian Melott, professor of physics at the University of Kansas, who co-authored the new paper appearing The Astrophysical Journal Letters, a peer-reviewed express scientific journal that allows astrophysicists to rapidly publish short notices of significant original research.

“I was expecting there to be very little effect at all,” he said. “The supernovae were pretty far way — more than 300 light years — that’s really not very close.”

According to Melott, initially the two stars that exploded 1.7 to 3.2 million and 6.5 to 8.7 million years ago each would have caused blue light in the night sky brilliant enough to disrupt animals’ sleep patterns for a few weeks.

But their major effect would have come from radiation, which the KU astrophysicist said would have packed doses equivalent to one CT scan per year for every creature inhabiting land or shallower parts of the ocean.

“The big thing turns out to be the cosmic rays,” Melott said. “The really high-energy ones are pretty rare. They get increased by quite a lot here — for a few hundred to thousands of years, by a factor of a few hundred. The high-energy cosmic rays are the ones that can penetrate the atmosphere. They tear up molecules, they can rip electrons off atoms, and that goes on right down to the ground level. Normally that happens only at high altitude.”

Melott’s collaborators on the research are Brian Thomas and Emily Engler of Washburn University, Michael Kachelrieß of the Institutt for fysikk in Norway, Andrew Overholt of MidAmerica Nazarene University and Dimitry Semikoz of the Observatoire de Paris and Moscow Engineering Physics Institute.

The boosted exposure to cosmic rays from supernovae could have had “substantial effects on the terrestrial atmosphere and biota,” the authors write.

For instance, the research suggested the supernovae might have caused a 20-fold increase in irradiation by muons at ground level on Earth.

“A muon is a cousin of the electron, a couple of hundred times heavier than the electron — they penetrate hundreds of meters of rock,” Melott said. “Normally there are lots of them hitting us on the ground. They mostly just go through us, but because of their large numbers contribute about 1/6 of our normal radiation dose. So if there were 20 times as many, you’re in the ballpark of tripling the radiation dose.”

Melott said the uptick in radiation from muons would have been high enough to boost the mutation rate and frequency of cancer, “but not enormously. Still, if you increased the mutation rate you might speed up evolution.”

Indeed, a minor mass extinction around 2.59 million years ago may be connected in part to boosted cosmic rays that could have helped to cool Earth’s climate. The new research results show that the cosmic rays ionize the Earth’s atmosphere in the troposphere — the lowest level of the atmosphere — to a level eight times higher than normal. This would have caused an increase in cloud-to-ground lightning.

“There was climate change around this time,” Melott said. “Africa dried out, and a lot of the forest turned into savannah. Around this time and afterwards, we started having glaciations — ice ages — over and over again, and it’s not clear why that started to happen. It’s controversial, but maybe cosmic rays had something to do with it.”

NASA’s Exobiology and Evolutionary Biology program supported the research, and computation time was provided by the High Performance Computing Environment at Washburn University.

The University of Kansas is a major comprehensive research and teaching university. The university’s mission is to lift students and society by educating leaders, building healthy communities and making discoveries that change the world. The KU News Service is the central public relations office for the Lawrence campus.