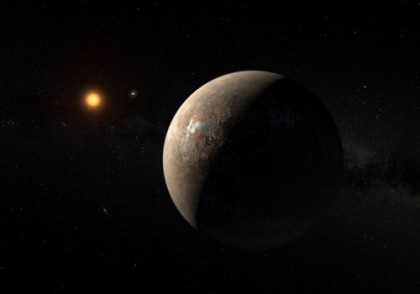 Last week, researchers confirmed the existence of a rocky—and possibly wet—planet orbiting Proxima Centauri, the closest star to our sun. Dubbed Proxima b, the planet lies within the “habitable zone” of its star, meaning the planet’s surface could be warm enough, but not too warm, to support liquid water and thus be amenable for life.
Astronomers found Proxima b by analyzing Doppler data and other measurements from telescopes around the world, chiefly ESO telescopes mounted at the La Silla Observatory in Chile. The results of the study were first reported in the journal Nature.

Located 4.2 light years away from Earth, Proxima b is notably the closest terrestrial planet outside our solar system ever found. While that might still seem like a haul, scientists believe the potential exists for robotic exploration of the world in the coming centuries. Researchers have already provided a snapshot of the planet, which likely rotates its star every 11.2 days; is about 1.3 the mass of Earth; and is possibly tidally locked, meaning one half of the planet is forever bathed in light and radiation, while the outward-facing side remains dark. Some of the planet’s quirkiness prompted Wired magazine to pen its splash-of-cold-water headline, “Y’all need to chill about Proxima Centauri b.”To offer some perspective on what some are calling “an astronomy dream come true” and Earth 2.0, the Hub reached out to Sarah Hörst, an assistant professor in the Department of Earth and Planetary Sciences. Hörst’s research focuses on atmospheric chemistry and complex organics found in our solar system—and beyond.

We spoke with Hörst while she was coincidentally attending the second annual Ocean Worlds conference at the Woods Hole Oceanographic Institute. We assume Proxima b came up once or twice among those gathered.

I’ll admit, I was a little geeked out when I heard the news. An Earth-like world, potentially habitable and so relatively close. What was your initial reaction to the new exoplanet, and is this level of excitement justified?

A lot of people have mentioned being really excited about the news, which makes me exceedingly happy. Ultimately, I really want the public to understand what we do and to be inspired to look up and think about worlds far beyond our own. For me, every new world that we learn about is another piece to the “how worlds work” puzzle that we are trying to put together, so I am always excited when we learn about other worlds.

I noticed you playfully tweeted out a “PSA” that planets in the so-called habitable zone are not necessarily habitable. And just being Earth-sized doesn’t mean grab your beach ball, we’re headed for sun and fun on Proxima b. Can you expand on your thoughts on why being in the habitable zone doesn’t essentially mean E.T. is walking on the surface.

Your expertise is in planetary atmospheres. Do we know yet if Proxima b has an atmosphere or not, and if so, what it might be like?

We don’t know yet if Proxima b has an atmosphere. It is also kind of difficult to speculate what it might be like. Within our own solar system we see a diversity of planetary atmospheres, and we are still working to understand what determined which worlds have atmospheres, where those atmospheres came from, and what they are made of. This is one of the many reasons why exoplanets, including Proxima b, are so interesting for those of us that study the solar system. They are adding numerous more data points that we can use in our quest to understand how planets work.

“Every time a new telescope sees first light or a planetary spacecraft is launched, we should remember that they were built by human hands and they will explore places that humans have not gone yet.”

We should be able to find out if Proxima b has an atmosphere using the James Webb Space Telescope, which launches in 2018 and will be operated from the Space Telescope Science Institute, located on our Homewood campus. And by looking at how the amount of heat [the planet] emits varies as a function of the position in its orbit. If an atmosphere were present it would redistribute heat.

You’ve just come from a conference on ocean worlds. Was this discovery on everyone’s lips? And what is the likelihood of this being a new ocean world?

We had a rather lively discussion about exoplanets, sparked by the Proxima b announcement, at the very beginning of the meeting. Ultimately, this particular meeting was very focused on bringing together the planetary science and the Earth oceanography communities to use expertise from both groups to enable robotic exploration of the oceans in our solar system. Of course, some day we all hope to be learning about ocean worlds all over the universe, but the purpose of this meeting was to think about ocean worlds a bit closer to home. In terms of Proxima b, some work has shown that worlds that are larger than Earth, but smaller than Neptune and Uranus, are likely to be ocean worlds, so it is possible that Proxima b is an ocean world.

I have to admit, my first reaction was somewhat dubious: How could there be an Earth-like world located literally around the nearest star outside our solar system? How did we not spot this exoplanet before, as you’d think this would be the first place we’d look?

Proxima b is around a type of star called an M dwarf, which is a very active star. Stellar activity complicates analysis of data when looking for planets. People have been looking for a planet around Proxima Centauri for a while and their persistence and improvements in data processing finally paid off. It is much more difficult to rule out a false positive for an active star, so the burden of proof is higher for a star like Proxima Centauri.

I’ve read the planet is close to its star, perhaps as close or closer than Mercury is to our sun. But Proxima Centauri is cooler and fainter than our sun. Still, what would be the impact of being so close?

The location of the habitable zone is determined by the amount of energy coming from the star, so for stars like Proxima Centauri, the habitable zone is closer to the star than it is in our solar system. The closer a planet gets to its star, the more likely it is to be tidally locked, which means that the same side of the planet always faces the star. Our moon is tidally locked to Earth, which is why we can only see one side from Earth. Planets that are tidally locked can end up with very large temperature differences between the side of the planet that faces the star (hot!) and the side that faces away from the star (cold!), especially if they don’t have an atmosphere to redistribute heat. Tidally locked planets may be less favorable for life, but that is something that we are still trying to understand. Having only one example of life makes it a bit difficult to know where life can exist.

How important is it that we learn more about the formation of this planet and its star?

Our solar system has one star, with a small—in the grand scheme of things—number of worlds orbiting it that all formed from the same reservoir of starting material. It amounts to one data point about how planetary systems work. To really understand the fundamental physical and chemical processes that underlie the world we observe, we usually need lots of points of data that cover the range of conditions that are relevant. Based on sheer numbers alone, exoplanets are already revolutionizing our understanding of how planetary systems—and the worlds contained within them—work, and we are learning about kinds of planets we don’t have examples of in our solar system like hot Jupiters and super Earths.

Do you think this sort of discovery will become increasingly more common the next few years? Is this a case of, now that we know what to look for …

The field of exoplanets is quite young as scientific fields go, and it has been incredible to watch the field take off. It is a field that is especially sensitive to improvements in technology (telescopes, data analysis techniques, etc.) and as those improve and as we build bigger and better telescopes, like the James Webb Space Telescope, the field will continue to make discoveries at a rapid pace. The data analysis techniques that enabled the discovery of Proxima b will also make detections of planets around M dwarfs more reliable, which is useful since M dwarfs are the most common type of star.

But the Proxima b discovery required something else that technology can’t necessary help: It required patience and persistence and serves as a reminder that there is always a human element in these discoveries. Every time a new telescope sees first light or a planetary spacecraft is launched, we should remember that they were built by human hands and they will explore places that humans have not gone, yet.

Could we really travel there? Or is this a case of theoretically, “yes,” but the technology hasn’t been invented yet.

I guess it depends what you mean by “we” and how quickly you would like to get there. I don’t think it is unreasonable to think we could send a robotic spacecraft there in our lifetimes. For example, the Breakthrough Starshot initiative. But I think we are still a long way from sending humans there. We haven’t even sent humans to Mars yet! So, is it physically possible? I don’t see why not. Is it something we are capable of doing right now? No.

Are you aware of any deep space missions to get a closer look at this and other potential ocean worlds?

NASA is currently developing a mission to Jupiter’s subsurface ocean moon Europa, the Europa Multiple Flyby Mission, which will orbit Jupiter and study Europa remotely. The European Space Agency is working on JUICE (Jupiter Icy Moon Explorer), which will also go to Jupiter, but will study another ocean moon, Ganymede.

In addition to those two missions, which are being actively developed and built right now, NASA is currently studying sending a lander to Europa’s surface—a study that I am involved with—and people are working on proposals to send missions to two moons of Saturn: Enceladus, which has a subsurface water ocean; and Titan, which has both a subsurface water ocean and hydrocarbon seas on its surface. These missions will be competing with each other and other possible missions like a Saturn Probe or a Venus explorer, and only one will be chosen. We definitely have more interesting ocean worlds in the solar system than we have money to explore them.

3 thoughts on “Proxima b: Could life exist on Earth-like planet in the solar system next door?”