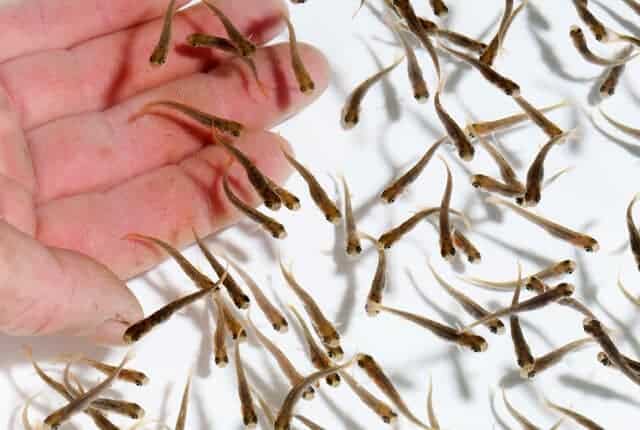 As the aquaculture (fish or shellfish farming) industry grows, so does the need for fish feed that’s not dependent on the stagnant supply of fish meal made from captured marine fish protein and oils.

With the help of Agricultural Research Service (ARS) scientists, fish feed made from tree nuts is now an alternative.

Fish physiologist Rick Barrows, who recently retired from the ARS Small Grains and Potato Germplasm Research Unit in Aberdeen, Idaho, partnered with Adaptive Bio-Resources, LLC, principal owner John Hamilton to develop feed ingredients high enough in protein to meet aquaculture feed requirements. Hamilton, whose company is based in Escalon, California, came up with the idea of using nuts that do not meet quality standards required by the California Nut Growers Association. Such nuts are typically chipped, broken, discolored, or irregular in size and thus are not marketable to consumers.

“If pistachios or almonds are too big, too small, or too green, they’re not used for human food, but they still have some value,” says Barrows, who is stationed in Bozeman, Montana.

Barrows and his colleagues modified the nutritional profile of nut materials to increase protein and fit specifications for aquaculture feeds. They evaluated the nut mixture in three fish feeding studies.

A second study determined the amount of protein and amino acids that was actually digestible. “The nut meal was highly digestible and palatable,” Barrows says. “Fish seemed to find the nut meal very tasty.”

Findings showed that trout fed the nut meals all had weight gains equivalent to trout fed the fish-meal control, except those fed the partial 50-percent replacement level with almond meal alone instead of with almond and pistachio meal.

Adaptive Bio-Resources has been making the nut meal ingredient for 2 years, according to Hamilton. It’s a natural ingredient that’s desirable in feed for food animals like fish.

Additional research on the nut meal is being conducted with collaborators at other institutions and at several commercial trout farms, Barrows says.