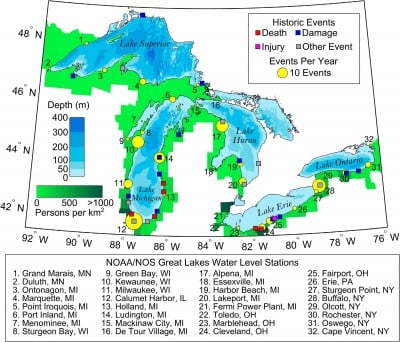 Tsunamis have been on the news lately with another wave system hitting Japan in November 2016. The Nov. 22 tsunami hit the island country after a magnitude 7.4 earthquake occurred in the ocean offshore of Japan. Have there been and could there be tsunamis in the Great Lakes?  The answer is actually yes, even though the Great Lakes region is an area of low seismic activity. New research published in Nature.com, November, 2016 has found that tsunamis have occurred in all five of the Great Lakes, but not one formed from earthquake activity. Rather, the tsunamis in the Great Lakes are actually caused by gathered groups of thunderstorms.

Tsunamis in the Great Lakes are technically called meteotsunamis, or tsunamis caused by meteorological conditions. A meteotsunami is defined as a rapidly moving wave that can be generated by quickly changing air pressure or high wind speeds or a combination of both. While these meteotsunami waves are not nearly as big as those generated by seismic tsunamis, NOAA reports a wave was actually measured off Chicago in 1954 at 10 feet high, and when it hit, several people were knocked off a pier and seven drowned.

Have there been any notable meteotsunamis in the Great Lakes in recent years?  Yes, according to the new research, in 2014 a Lake Superior meteotsunami overtopped the Soo Locks, impacted shipping operations and caused evacuation of some homes in Sault Ste. Marie, Ontario. And the NOAA report documented another one in 2012 off Cleveland, Ohio, knocking people on the beach off their feet and swamping boats in harbors.

Researchers used the NOAA water level gauges in the Great Lakes to analyze causes and frequency by detailed analysis of these long-term water level records. Results indicated an overall average of 106 meteotsunami events per year throughout the entire Great Lakes basin with Calumet Harbor, Ill., on Lake Michigan having the most frequent (29 per year) followed by Buffalo, New York, on Lake Erie (17 per year) and Alpena, Mich., on Lake Huron (14 per year). Of the 5 Great Lakes, Lake Michigan had the highest frequency of meteotsunamis at 51 per year, followed by Lake Erie (27/year); Huron (17/year), Superior (6/year) and Ontario (5 /year).

How are seiches in the Great Lakes related to meteotsunamis?  Time of duration is a key. Seiches result when strong winds and rapid changes in atmospheric pressure push water from one end of the lake to the other. The water rebounds to the other side of the lake when the wind stops. As a result the water then continues to oscillate back and forth for hours or possibly even days. The time period between the “high” and “low” of a seiche can be as much as four to seven hours. Contrast this with waves that are generated by meteotsunamis in a matter of minutes. It is quite possible some reported seiches have actually been meteotsunamis.

While water level changes are dealt with by coastal communities as part of their resilience planning, this research found that waves generated by meteotsunamis are not considered in planning or design along the Great Lakes coasts and the available forecast models are not sufficient for public safety efforts. It seems this research has also shown the value and  need for continued monitoring of existing Great Lakes water level gauges and possibly even additional ones in the future. Coastal communities that might be impacted need to understand what meteotsunamis are and the potential risk they pose to human safety, infrastructure and resilience.