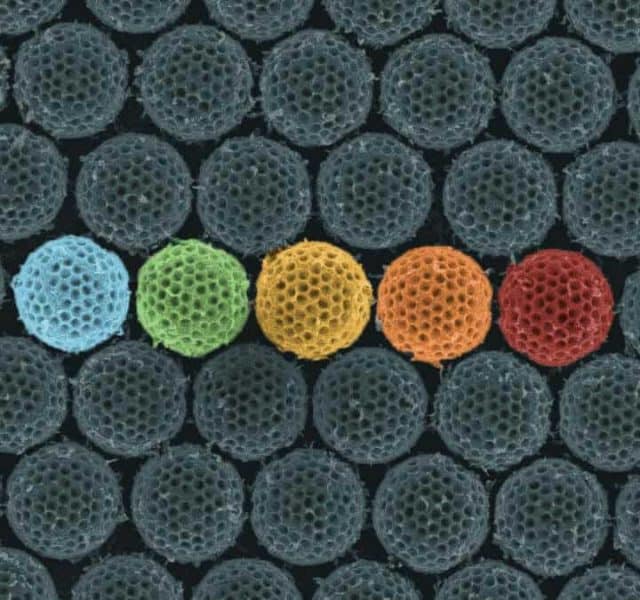 Synthetic microspheres with nanoscale holes can absorb light from all directions across a wide range of frequencies, making them a candidate for antireflective coatings, according to a team of Penn State engineers. The synthetic spheres also explain how the leaf hopper insect uses similar particles to hide from predators in its environment.

Scientists have long been aware that leaf hoppers extrude microparticles, called brochosomes, and wipe them on their wings. Because the particles are superhydrophobic, the leaf hopper’s wings stay dry in wet conditions. What was not understood before the current work is that the brochosomes also allow leaf hoppers and their eggs to blend in with their backgrounds at the wavelengths of light visible to their main predators, such as the ladybird beetle.

“We knew our synthetic particles might be interesting optically because of their structure,” said Tak-Sing Wong, assistant professor of mechanical engineering and the Wormely Family Early Career Professor in Engineering. “We didn’t know, until my former postdoc and lead author of the study Shikuan Yang brought it up in a group meeting, that the leaf hopper made these non-sticky coatings with a natural structure very similar to our synthetic ones. That led us to wonder how the leaf hopper used these particles in nature.”

Doing a search of the scientific literature turned up nothing about the leaf-hopper brochosomes’ use as camouflage. But the pits’ sizes in the synthetic microspheres are very close to the wavelength of light, and can capture up to 99 percent of light, ranging from ultraviolet through visible and into the near infrared. The particle surface acts like a metamaterial, the type of material used in cloaking devices.

“The problem is that in the field, these leaf hoppers produce very little of this product, and it is very hard to collect,” Wong said. “But we had already produced large quantities of these structures in the lab, enough to put inside a machine to look at their optical properties.”

In a paper published online today (Nov. 3) in Nature Communications, the researchers simulated insect vision and found that the brochosomes are very likely camouflage coatings against leaf hopper predators. Camouflage is common in nature, but there are very few examples of natural antireflective coatings, moth eyes being a prominent exception. Moth eyes are covered in anti-reflective nanostructures that prevent light from reflecting off them at night when predators might see them.

The synthetic microspheres are produced via a rather complex five-step process using electrochemical deposition. However, the process can be scaled up and many different materials can be used to make the synthetic brochosomes, such as gold, silver, manganese oxide or even a conductive polymer.

“Different materials will have their own applications,” Wong said. “For example, manganese oxide is a very popular material used in supercapacitors and batteries. Because of its high surface area, this particle could make a good battery electrode and allow a higher rate of chemical reaction to take place.”

As an antireflective coating, this material could have applications in sensors and cameras, where capturing unwanted light reflection could increase the signal-to-noise ratio. This also could be particularly useful in telescopes. For solar cell applications, a coating of synthetic brochosomes could increase light capture at multiple wavelengths and from every angle due to the 3D soccer-ball-shaped structure of the spheres, making it unnecessary to build devices to track the sun.

“This paper is more of a fundamental study,” Wong said. “In the future, we may try to extend the structure to longer wavelengths. If we made the structure a little larger, could it absorb longer electromagnetic waves such as mid-infrared and open up further applications in sensing and energy harvesting?”

That remains to be studied.