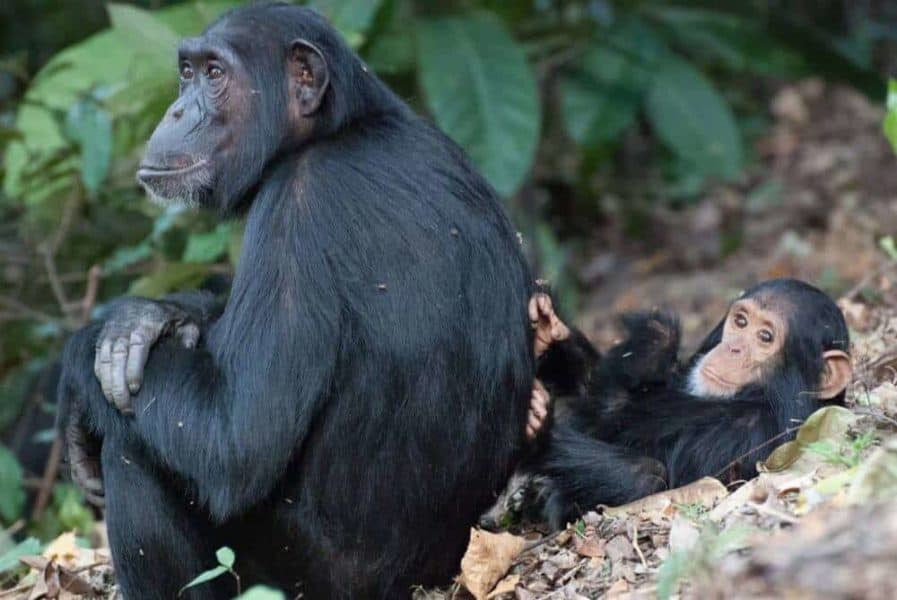 It’s very difficult to determine when, how and why human language began. While fossil primates provide important clues about human evolution, the sounds they made and the soft tissue involved in making those sounds weren’t preserved.

But chimpanzees — one of our closest living relatives — provide important points of comparison for inferring the sorts of sounds our early ancestors may have made. During the 175th Meeting of the Acoustical Society of America, being held May 7-11, 2018, in Minneapolis, Minnesota, Michael Wilson, an associate professor at the University of Minnesota, will present his group’s work searching for similarities between the vocal communications of chimpanzees and humans.

“Chimpanzees give a range of different calls: hoots, pant-hoots, pant-grunts, pant-barks, rough-grunts, nest-grunts, alarm barks, waa-barks, wraas, screams, copulation screams, and soft panting play sounds (a.k.a. laughter),” Wilson said. “Many of these calls grade into one another, and it can be difficult to categorize particular examples of some calls.”

Wilson’s group works with new and archival recordings of chimpanzees from Gombe National Park in Tanzania, the site where Jane Goodall, renowned primatologist and anthropologist, began the first long-term field study of chimpanzees.

“When Jane gives public talks, she often begins by giving a pant-hoot: a loud call that begins with an introduction, followed by a build-up, a climax and a let-down. Much of the work on chimpanzee vocalizations has focused on pant-hoots because they’re loud, conspicuous, and seem to be important,” Wilson said.

For their work, Wilson’s group records calls from chimpanzees at Gombe using hand-held directional microphones and digital recorders. And, until recently, they applied simple statistical models — such as principal components analysis — to small sets of features like the duration of different call components, fundamental frequency, and frequency range. “More recently, my student Nisarg Desai has adapted techniques from speech technology, such as machine learning models, to better categorize calls,” Wilson said.

Chimpanzee vocal communication is also interesting because it “raises questions about the evolution of signaling and social behavior,” Wilson said. “Do chimpanzee pant-hoots inform other chimpanzees about good food patches, signal community membership, or individual identity, body size, or health?”

The group’s findings so far suggest that chimpanzee vocalizations resemble human language less than you’d expect. For example, Wilson’s student Lisa O’Bryan studied food-associated rough-grunt calls at Gombe and in a group of captive chimpanzees in Texas. “In contrast to some previous studies, which reported that rough-grunts vary acoustically in ways that could inform other chimpanzees about food quality, she found that within rough-grunt sequences to a given food type, chimpanzees produce a range of rough-grunt variants — suggesting there is no consistent match between acoustic features and food quality,” Wilson said.

And, it turns out, “chimpanzee vocal communication isn’t particularly languagelike,” Wilson said. “This is surprising, given that chimpanzees resemble us in so many other ways. But it seems that the key events in language evolution occurred well after the divergence of the chimpanzee and hominin (primate) lineages. In this case, language likely evolved due to uniquely human circumstances.”

1 thought on “Can chimpanzee vocalizations reveal the origins of human language?”