The benefits of organic foods, from sustainable production to improved health, are generally accepted. And so is their greater cost.

At a Lewiston grocery store, for example, blueberries sell for $2.50 a pint, while an organic option costs $10 a pint.

That got Associate Professor of Economics Nathan Tefft and two colleagues thinking: What would happen if organic food production (specifically, organic apples, blueberries, oranges, and strawberries) was subsidized? 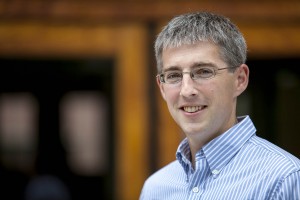 After all, cheaper fruit might boost demand, helping producers while benefiting consumers. Plus, organic food is a growing sector of the agricultural economy. In Maine alone, organic sales grew from $37 million in 2012 to $60 million by 2017.

These what-if questions were answered in “The Distributional Impact of a Green Payment Policy for Organic Fruit,” recently published in PLOS One, with Tefft as a coauthor along with corresponding author Erik Nelson and John Fitzgerald of Bowdoin.

To a layperson, a subsidy to support clean technology might sound like an all-round win. But as Tefft says, “economists are always looking at tradeoffs.”

For example, it’s known that some price subsidies for clean technology, such as those for electric cars in the U.S., have been shown to be “strongly regressive,” meaning that they benefit wealthy buyers who are able to afford the pricey vehicles.

Partly for that reason, Tefft and his coauthors were eager to look at how a price subsidy on organic fruit, even a modest 10 percent subsidy, might affect all households, poor, middle-income, and wealthy, “about which there is little current evidence.”

So the researchers reviewed a huge dataset: the purchasing patterns, from 2011 to 2013, of some 60,000 U.S households who record every single household purchase as members of Nielsen’s Consumer Panel.

Even before tackling the data, Tefft and his colleagues thought they had an inkling: According to previous research, certain wealthier households — urban, educated, older, and married with at least one child at home — are more likely to purchase organic produce than less-wealthy households.

Given that lead, the researchers wondered: Would a 10 percent price subsidy on organic foods favor those households from a certain income class?

Would various barriers — such as less availability or less demand — make subsidized products less accessible to poor households? Worse yet, would a subsidy merely “improve the welfare of more educated and wealthier U.S. households” — another example of the rich getting richer, and the poor getting poorer?

Ultimately (and a bit surprisingly), they found that their answers were…nope, nope, and nope.

Not only would most households, regardless of wealth, “buy a bit moreorganic fruit with a price subsidy,” the researchers found, but poor or middle-income household would increase their consumption of organic fruits relatively more than rich households.

An organic shopper himself, Tefft knows that these findings, however supportive of a subsidy on organic fruit production, aren’t likely to translate immediately into new policies. For one, lots of questions remain unanswered.

For example, he says, “we don’t know how households of various income levels value the benefits — such as flavor, potential health impacts, or support for local agriculture — of organic food.”

While this academic foray was into how consumers engage with healthy food, Tefft often focuses on health-policy intersections with risky behaviors, such as excessive drinking.

He’s interested in “what people do that can cause risk” to themselves and harm to society, “yet they still enjoy doing it.” From a public policy standpoint, “it’s a challenge for society to make decisions on how to handle” such complex behavior. “Finding the right balance is an interesting question.”

And whether it’s about risky or healthy behaviors, he says, it’s “fun learning the answers to questions where it’s hard to guess the answer ahead of time.”