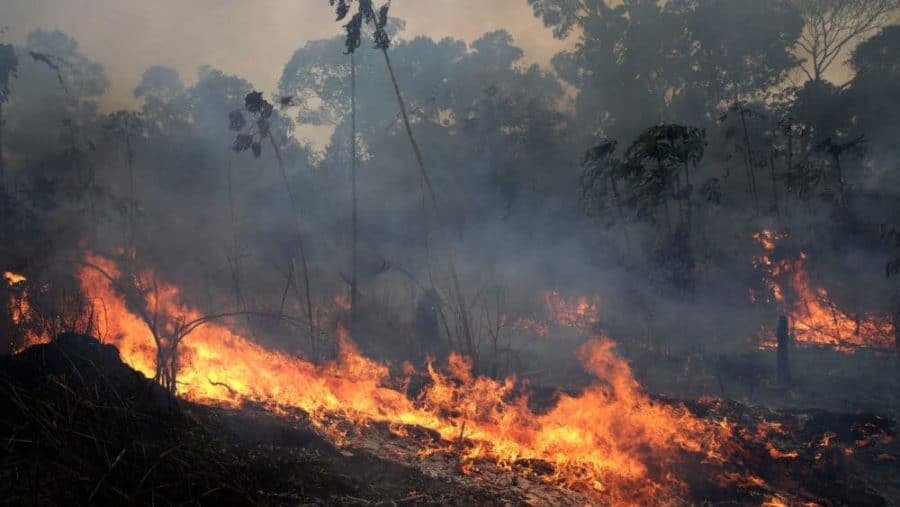 A fire burns along the road to Jacunda National Forest, near the city of Porto Velho in the Vila Nova Samuel region which is part of Brazil's Amazon, Monday, Aug. 26, 2019. The Group of Seven nations on Monday pledged tens of millions of dollars to help Amazon countries fight raging wildfires, even as Brazilian President Jair Bolsonaro accused rich countries of treating the region like a “colony.” (AP Photo/Eraldo Peres)

Thousands of fires raging across the Amazon, many deliberately set by loggers, ranchers, and others seeking to clear land, have triggered public outrage in recent weeks and prompted climate experts to warn of a fast-approaching point of no return for the lush jungle that covers more than 2 million square miles and extends into nine countries. The rich rainforest is critical to the Earth’s climate, influencing weather systems, generating oxygen, and absorbing huge amounts of carbon dioxide — the heat-trapping greenhouse gas that contributes to global warming. Harvard’s Brian Farrell, director of the David Rockefeller Center for Latin American Studies, Monique and Philip Lehner Professor for the Study of Latin America, curator of entomology in the Museum of Comparative Zoology, and professor of biology, has conducted research in the Amazon for decades. He spoke to the Gazette recently about what the fires mean for the future of the planet.

GAZETTE: Can you outline the work you have been doing in the Amazon and whether the fires are affecting it?

FARRELL: At any one moment, several Organismic and Evolutionary Biology students are conducting their thesis research somewhere in the Amazon. My newly graduated Ph.D. student from Brazil, Bruno de Medeiros, has focused his research on insects associated with pollinating the palms now threatened by the fires. The regions where I conducted research in the 1980s in the Peruvian Amazon are now also under threat.

GAZETTE: Are these fires a common occurrence? Are they worse this year than in the past, and if so, why?

FARRELL: Natural fires are not uncommon in any forest ecosystem, but they rarely spread far in the wet forests of the Amazon. The current fires were set deliberately to clear land for cattle ranching and other activities and are more than double this year compared to previous years. While there are no doubt many different people responsible for setting the thousands of fires now burning, they are no doubt all encouraged by a recent weakening of environmental policiesas well as enforcement [in Brazil, where most of the Amazon is situated].

GAZETTE: What do the fires mean for the biodiversity of the Amazon, and for the indigenous populations living there?

FARRELL: These widespread fires are driving wildlife away from their habitats and territories, with resulting catastrophic losses. The life and livelihoods of the Yanomami and other indigenous peoples are under threat not seen since the first Europeans entered South America. The fires are spreading like a contagion. The great fear is that the loss of habitat will cross a threshold of no return, a tipping point for transformation of climate cycles that will result in new rainfall patterns. The rainfall cycles in the Amazon depend on transfer of water through rainforest plants to the atmosphere, where it eventually condenses as rain that is delivered over a very broad region, again sustaining rainforest plants as well as much of the continent. If fire removes the plant life responsible for moving water up into the clouds, the land will dry and rainforests will be replaced by grasslands able to withstand the newly arid conditions, which can persist for thousands of years. This has occurred in the Americas and elsewhere in prehistoric times. The economic and ecological consequences for the cities that today depend on these sources of atmospheric water, as well as the natural ecosystems and indigenous peoples they support, will be devastating.

“The very fact that we could reach the tipping point this year should be enough to focus world attention on this crisis, just as if an asteroid were headed toward Earth. Where it lands is not the concern only of the country impacted, but everyone on the planet.”

GAZETTE: Similarly, what does it mean for the environment when so many trees that help absorb carbon dioxide go up in smoke?

FARRELL: As the largest rainforest in the world, the Amazon’s storage of carbon is substantial enough to change the world climate if it were released into the atmosphere. This is a risk for the entire planet.

GAZETTE: As you mentioned above, many of the fires have been intentionally set, in large part by Brazilian farmers and ranchers looking to clear their land. Are there ways Brazil’s growing agriculture sector can work to limit its impact on the rainforest?

FARRELL: The production of cattle and soybeans is one of the least-sustainable and less economically valuable uses of the rainforests. Analyses by the scientists and economists associated with leading climate change authority, scientist Carlos Nobre, clearly show alternative approaches to sustainable extraction that also carry benefits of education and infrastructure development. Through the Amazonian Third Way Initiative, Nobre has shown how the value of pharmaceuticals, nutraceuticals, and other natural plant products yield much greater value per hectare of standing forest than soybeans or cattle production. And these products are sustainably extracted. Think of acai as one example. What is needed, however, is a workforce that is educated to know how to collect and process these products.

GAZETTE: What responsibility do industrialized nations have to help protect natural resources throughout the developing world? Are we doing enough?

FARRELL: Conservationists have realized that we must tackle poverty and conservation at the same time while respecting local sovereignty. Many have argued that there are sufficient economic resources as well as practical approaches available to turn things around on both fronts. The limiting factor is the political will to favor long-term solutions over short-term advantages. This is as true here in the U.S.A. as it is elsewhere.

FARRELL: It is very clear that sufficiently strong internal protests combined with external sanctions can have effects on government policies anywhere in the world, but these require political will at every level.

GAZETTE: At the same time, isn’t it true that countries should have the right to govern their natural resources as they see fit, as the U.S. did for generations as it became a global superpower?

FARRELL: Absolutely. Governments that well represent the will of the people are also members of global economic communities. No country is an island. We in the Americas and around the world share common interests that may help guide us toward a sustainable management of resources. There is the concept of the tragedy of the commons. World climate and world oceans are such commons that may either benefit everyone or decline beyond recovery, depending on how they are managed. Lack of management is the option that results in tragic loss of a common good.

GAZETTE: With the Amazon’s dry season set to peak in September, what could happen next?

FARRELL: That depends on several factors having to do with the somewhat unpredictable pattern of the weather, particularly winds and rain that could either make the situation worse or lessen the effects of the fires. Plus, of course, there is the potential influence of national efforts to quell the fires. But the very fact that we could reach the tipping point this year should be enough to focus world attention on this crisis, just as if an asteroid were headed toward Earth. Where it lands is not the concern only of the country impacted, but everyone on the planet. The Amazon fire is like that, a local problem of global significance.