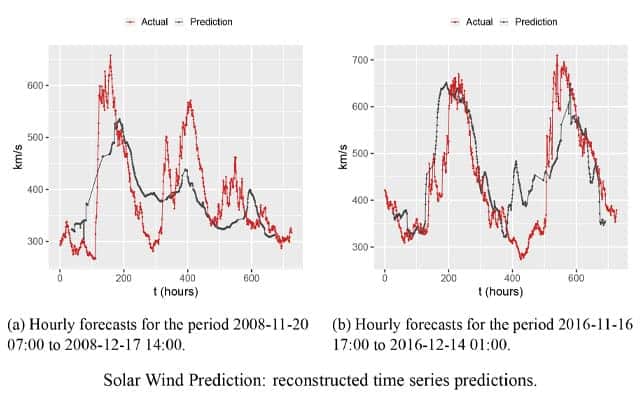 While space weather can produce dancing lights here on Earth such as the beautiful Aurora borealis and Aurora australis that sometimes streak across the northernmost and southernmost skies, geomagnetic storms can cause severe damage to power grids, satellites, and many other technological electrical systems.

Heliophysicist Bala Poduval has dedicated her space weather research to predicting the solar wind conditions that cause these storms, with a recent highlight being the validation of a machine learning model that she and her colleagues developed for solar wind prediction in which simulated data using the Comet supercomputer at the San Diego Supercomputer Center played a pivotal role.

“To mitigate the adverse effects of space weather, it is necessary to forecast these events with sufficient lead time so that appropriate safety precautions can be taken,” said Poduval, a research scientist with the University of New Hampshire. “One of the important pieces of information we needed to improve our prediction model was the ambient solar wind velocity near the Earth.”

Using Comet, Poduval and her international colleagues were able to validate a model that predicts time-lagged effects of the solar wind and the dependence on the wind’s velocity. To accomplish this, they used a machine learning technique called Dynamic Time Lag Regression (DTLR) and validated their work by predicting the solar wind arrival near the Earth’s orbit from physical parameters of the Sun as measured from the ground and space.

“We used the changes in the solar magnetic field, in terms of the magnetic flux tube expansion factor, as well as other characteristics of the sun such as the number of sunspots, to determine the speed of the solar wind that can be detected at Earth after a lag of ‘dynamic time’,” explained Poduval. “The validation of DTLR and the solar wind forecasting would not have been possible in any reasonable time frame without using Comet since the computation of magnetic flux expansion factor for a period sufficient to train a neural network would take months on a local machine as compared to just a few weeks with Comet.”

Poduval and her colleagues’ work was recently presented  at the International Conference on Learning Representations, which was held in a virtual format due to the COVID-19 pandemic. Poduval is now exploring methods of artificial intelligence for substantially improving the accuracy of prediction, and with a recent National Science Foundation award, she is developing a neural network model for predicting solar energetic particle events.

This research was funded by a grant from the Centrum Wiskunde and Informatica, Amsterdam. Computational work on Comet was allocated by the National Science Foundation’s Extreme Science and Engineering Discovery Environment (XSEDE) (TG-ATM170013).