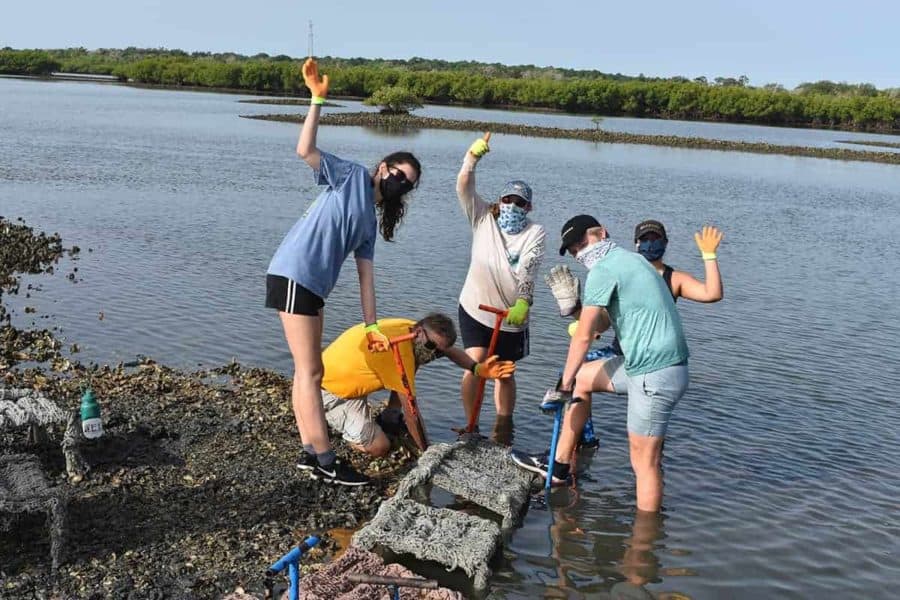 The Coastal and Estuarine Ecology Lab at UCF has been experimenting with various products looking for an effective, biodegradable material for restoration that’s inexpensive. For the past 14 months the group has been testing a mesh made from leftover potato starch collected from chip factories. So far, it’s been a successful method providing habitats for the lagoon’s vital shellfish population. A second material — a cement-infused fiber — also shows promise as an alternative to traditional plastic-based methods to attract oysters, which help improve lagoon water quality.

“The oysters seem to really be taking to the potato chip method,” says biology Professor Linda Walters. “While our plastic mesh was effective and brought over 14 million oysters to Mosquito Lagoon, this is an exciting step forward in using genuinely effective biodegradable materials.”

In the past 100 years, more than 85 percent of shellfish reefs have been lost globally as the result of human harvesting, loss of habitat, diseases and invasive species, according to research published in BioScience. Oyster reefs play a vital role in ecosystems as natural water filters, barriers against erosion and habitats for marine life.

“Harmful algal blooms became frequent after the loss of oysters,” Walters says. “The reefs can stabilize shorelines and provide nutrients to other animals. We need them so that synergy in ecosystem services may be restored.”

The recent innovation builds on years of work by Walters and a team of students and more than 62,000 volunteers to rebuild these lost habitats in Mosquito Lagoon waters near New Smyrna Beach. Walters is also a member of the Sustainability Coastal Systems cluster at UCF. Their search for a more eco-friendly product led them to the Netherlands and a company called BESE Ecosystem Restoration Products. BESE-products, formed around a team of ecologists and habitat experts, developed the innovative mesh from leftover potato starch collected from chip factories. The mesh is manually attached to the shells of oysters using wire, then left alone to be observed in the regeneration process. After 14 months of pilot testing, the potato chip reefs have over 400 live oysters per square meter.

“We wanted to test a method that is biodegradable and has the material lifespan approaching that of a local oyster. That span ranges around five to ten years,” explains Walters.

That durability is a key component of a long-time challenge for the lab. Previous products either quickly fell apart in the corrosive seawater or proved too expensive for the broad scope of Indian River Lagoon restoration.

Success on Florida’s coast augers well for similar projects in the U.S. The National Oceanic and Atmospheric Association, for instance, currently funds more than 70 restoration projects in 15 states.

“People generally don’t understand how difficult it is to make biodegradable materials that get the job done for coastal restoration,” Walters said. “There are a lot of technicalities to consider when finding new materials to use. We also are testing for unintended consequences to the environment.”

While the team tests the efficacy of potato chip mesh, another restoration material is in competition for long-term adoption by the lab. A faculty member of the University of North Carolina developed a cement-infused fiber called OysterCatcher. The lightweight, biodegradable material is modular, making it significantly easier to set up than lugging heavy bags of oyster shells into place. Free-floating oyster larvae attach to the shells and create their own shell, exponentially growing the reef over time.

“We are testing both methods simultaneously as to not put all our eggs in one basket. So far, this method works great and we’ve noticed that crabs and fish are loving the refuge it provides,” Walters says.

It will be at least a year until Walters reaches a conclusion on the best option.

“It’s a very different summer with COVID, that much is for sure,” Walters says. “It’s been difficult not being able to work with community volunteers and with only 20 percent of the number of UCF students that we planned to hire. It is a total adjustment, but it’s better to continue working this way than not working at all.”