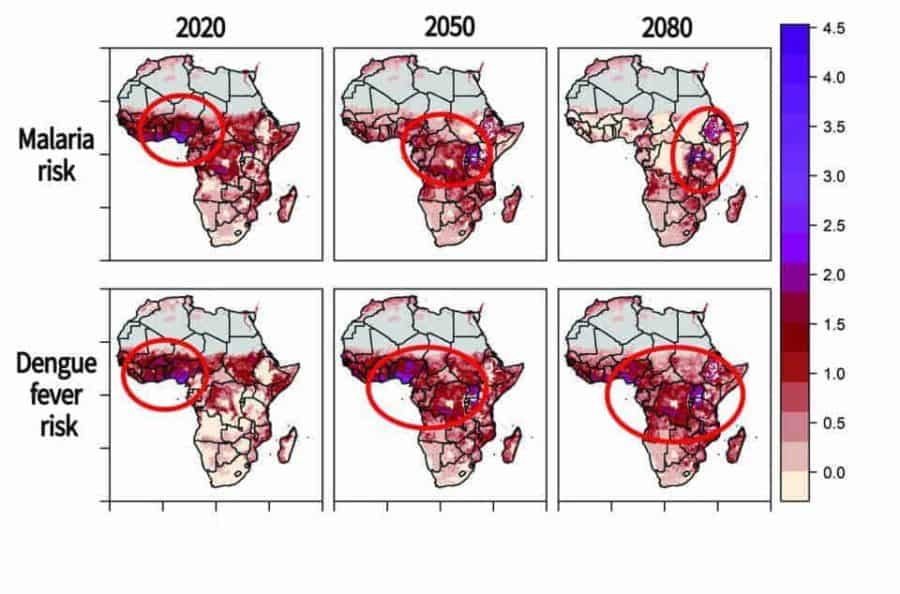 All mosquitoes are not created equal. Different species of the flying pest thrive at various temperature ranges and transmit different diseases. From this starting point, a Stanford-led paper for the first time predicts how, when and where in Sub-Saharan Africa malaria will ebb and other mosquito-borne diseases, such as dengue fever, will rise dramatically. The article, published Sept. 9 in Lancet Planetary Health, warns of a public health disaster if the region fails to supplement its focus on malaria to include strategies tailored to other mosquito-borne diseases.

A warming climate and urbanization will likely lower rates of malaria, while increasing rates of other mosquito-borne diseases, such as dengue fever, in Sub-Saharan Africa. Public health strategies must adapt to avoid a public health crisis.

“Climate change is going to rearrange the landscape of infectious disease,” said Stanford biologist and study lead author Erin Mordecai. “Chikungunya and dengue outbreaks like we’ve recently seen in East Africa are only becoming more likely across much of the continent. We need to be ready for this emerging threat.”

A tale of two mosquitoes

The nighttime-biting Anopheles gambiae mosquito transmits malaria, a disease that affects more than 200 million people in Sub-Saharan Africa, and killed more than 400,000 people there in 2018. For years, public health efforts in the region have taken aim at the scourge with insecticide-treated bed nets and indoor spraying, among other measures.

Past research by Mordecai and others found that warmer temperatures increase transmission of vector-borne disease up to an optimum temperature or “turn-over point,” above which transmission slows. Just as they carry different diseases, different mosquitoes are adapted to varying temperatures. Malaria is most likely to spread at 25 degrees Celsius (78 degrees Fahrenheit) while the risk of dengue is highest at 29 degrees Celsius (84 degrees Fahrenheit).

As a result, a warming world has meant more dengue – 2019 was the worst year on record for the disease, with cases in every region, including some countries that had never seen dengue, according to the World Health Organization.

In Sub-Saharan Africa, the shift toward mosquitoes that carry diseases other than malaria is likely to accelerate with climate change, according to Mordecai and her colleagues. While warming could increase the number of malaria-carrying mosquitoes in relatively cool places, such as highlands, it is likely to decrease their numbers in warmer lowland zones, such as Accra, Ghana, while increasing the number of mosquitoes that carry dengue and other diseases.

Some places will get a double-punch, according to the study. For both malaria and dengue, areas around Lake Victoria, such as the cities of Kisumu, Kenya and Entebbe, Uganda, will become high risk by 2050, with that risk spreading west to areas including the cities of Mbarara, Uganda and Mwanza, Tanzania.

A growing storm and a possible solution

Evidence of a potential explosion in diseases transmitted by Aedes aegypti is already present in Sub-Saharan Africa. Recent years have seen a rise in dengue infections and large chikungunya epidemics in Kenya and Sudan. The researchers suggest that a lack of public awareness of Aedes aegypti mosquito ecology and exposure risk increases the chances of contracting mosquito-borne diseases other than malaria, while the health systems in these regions miss many such cases due to a lack of testing and diagnosis or misdiagnosis as malaria.

“It’s vital to focus on controlling mosquitoes that spread diseases like dengue because there are no medical treatments for these diseases,” said study senior author Desiree LaBeaud, a professor of pediatrics in the Stanford Medical School who has been documenting the increase in arboviral exposure and disease in Kenya for the past 15 years. “On top of that, a shift from malaria to dengue may overwhelm health systems because diseases introduced to new populations often lead to large outbreaks.”

As has been done in the Americas, new public health efforts in Sub-Saharan Africa to target Aedes aegypti and dengue, chikungunya and other viruses need to be added to existing malaria control measures, the researchers argue. In particular, the development of accurate point-of-care diagnostics for dengue and chikungunya viruses and community-based mosquito control, such as trash removal and covering of standing water will be increasingly important for targeted care and prevention.