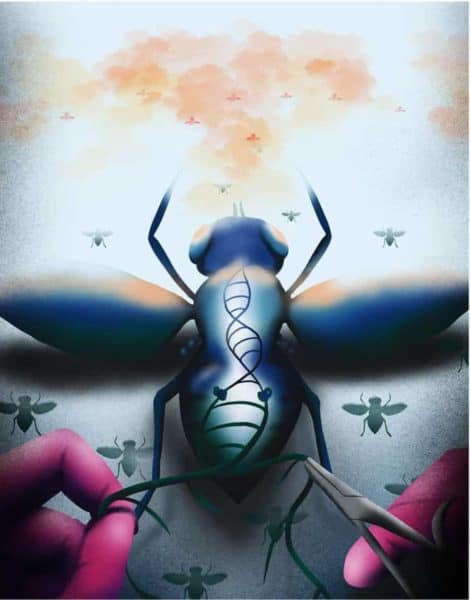 In the past decade, researchers have engineered an array of new tools that control the balance of genetic inheritance. Based on CRISPR technology, such gene drives are poised to move from the laboratory into the wild where they are being engineered to suppress devastating diseases such as mosquito-borne malaria, dengue, Zika, chikungunya, yellow fever and West Nile. Gene drives carry the power to immunize mosquitoes against malarial parasites, or act as genetic insecticides that reduce mosquito populations.

Although the newest gene drives have been proven to spread efficiently as designed in laboratory settings, concerns have been raised regarding the safety of releasing such systems into wild populations. Questions have emerged about the predictability and controllability of gene drives and whether, once let loose, they can be recalled in the field if they spread beyond their intended application region.

Now, scientists at the University of California San Diego and their colleagues have developed two new active genetic systems that address such risks by halting or eliminating gene drives in the wild. On Sept.18, 2020 in the journal Molecular Cell, research led by Xiang-Ru Xu, Emily Bulger and Valentino Gantz in the Division of Biological Sciences offers two new solutions based on elements developed in the common fruit fly.

“One way to mitigate the perceived risks of gene drives is to develop approaches to halt their spread or to delete them if necessary,” said Distinguished Professor Ethan Bier, the paper’s senior author and science director for the Tata Institute for Genetics and Society. “There’s been a lot of concern that there are so many unknowns associated with gene drives. Now we have saturated the possibilities, both at the genetic and molecular levels, and developed mitigating elements.”

The first neutralizing system, called e-CHACR (erasing Constructs Hitchhiking on the Autocatalytic Chain Reaction) is designed to halt the spread of a gene drive by “shooting it with its own gun.” e-CHACRs use the CRISPR enzyme Cas9 carried on a gene drive to copy itself, while simultaneously mutating and inactivating the Cas9 gene. Xu says an e-CHACR can be placed anywhere in the genome.

“Without a source of Cas9, it is inherited like any other normal gene,” said Xu. “However, once an e-CHACR confronts a gene drive, it inactivates the gene drive in its tracks and continues to spread across several generations ‘chasing down’ the drive element until its function is lost from the population.”

The second neutralizing system, called ERACR (Element Reversing the Autocatalytic Chain Reaction), is designed to eliminate the gene drive altogether. ERACRs are designed to be inserted at the site of the gene drive, where they use the Cas9 from the gene drive to attack either side of the Cas9, cutting it out. Once the gene drive is deleted, the ERACR copies itself and replaces the gene-drive.

“If the ERACR is also given an edge by carrying a functional copy of a gene that is disrupted by the gene drive, then it races across the finish line, completely eliminating the gene drive with unflinching resolve,” said Bier.

The researchers rigorously tested and analyzed e-CHACRs and ERACRs, as well as the resulting DNA sequences, in meticulous detail at the molecular level. Bier estimates that the research team, which includes mathematical modelers from UC Berkeley, spent an estimated combined 15 years of effort to comprehensively develop and analyze the new systems. Still, he cautions there are unforeseen scenarios that could emerge, and the neutralizing systems should not be used with a false sense of security for field-implemented gene drives.

“Such braking elements should just be developed and kept in reserve in case they are needed since it is not known whether some of the rare exceptional interactions between these elements and the gene drives they are designed to corral might have unintended activities,” he said.

According to Bulger, gene drives have enormous potential to alleviate suffering, but responsibly deploying them depends on having control mechanisms in place should unforeseen consequences arise. ERACRs and eCHACRs offer ways to stop the gene drive from spreading and, in the case of the ERACR, can potentially revert an engineered DNA sequence to a state much closer to the naturally-occurring sequence.

“Because ERACRs and e-CHACRs do not possess their own source of Cas9, they will only spread as far as the gene drive itself and will not edit the wild type population,” said Bulger. “These technologies are not perfect, but we now have a much more comprehensive understanding of why and how unintended outcomes influence their function and we believe they have the potential to be powerful gene drive control mechanisms should the need arise.”