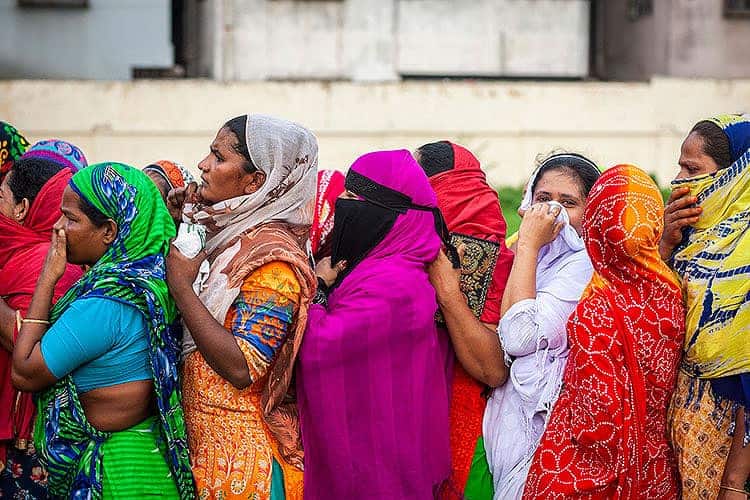 The onset of the COVID-19 pandemic last year led to a devastating loss of jobs and income across the global south, threatening hundreds of millions of people with hunger and lost savings and raising an array of risks for children, according to new research co-authored at the University of California, Berkeley.

The research, published today (Feb. 5, 2021) in the journal Science Advances, found “staggering” income losses after the pandemic emerged last year, with a median 70% of households across nine countries in Africa, Asia and Latin America reporting financial losses. By April last year, roughly 50% or more of those surveyed in several countries were forced to eat smaller meals or skip meals altogether, a number that reached 87% for rural households in the West African country of Sierra Leone.

“In the early months of the pandemic, the economic downturn in low- and middle-income countries was almost certainly worse than any other recent global economic crisis that we know of, whether the Asian financial crisis of the late 1990s, the Great Recession that started in 2008, or the more recent Ebola crisis,” said UC Berkeley economist Edward Miguel, a co-author of the study. “The economic costs were just severe, absolutely severe.”

The pandemic has produced some hopeful innovations, including a partnership between the government of Togo in West Africa and UC Berkeley’s Center for Effective Global Action (CEGA) on a system to provide relief payments via digital networks.

But such gains are, so far, isolated.

The new study — the first of its kind globally — reports that after two decades of growth in many low- and middle-income countries, the economic crisis resulting from the COVID-19 pandemic threatens profound long-term impact: Reduced childhood nutrition could have health consequences later in life. Closed schools may lead to delayed development for some students, while others may simply drop out. When families use their savings to eat, rather than invest in fertilizer or farm improvements, crop yields can decline.

“Such effects can slow economic development in a country or a region, which can lead to political instability, diminished growth or migration,” said Miguel, a co-director at CEGA.

A troubling picture of life during the pandemic

The study was launched in spring 2020, as China, Europe and the U.S. led global efforts to check spread of the virus through ambitious lockdowns of business, schools and transit. Three independent research teams, including CEGA, joined to conduct surveys in the countries where they already worked. As the pandemic surged in Africa during the spring of 2020, lockdowns put people out of work and made food difficult to find. Many people rushed to leave cities — even on foot — to stay with family or friends in the countryside. (World Bank photo by Henitsoa Rafalia)

Between April and early July 2020, they connected with 30,000 households, including over 100,000 people, in nine countries with a combined population of 500 million: Burkina Faso, Ghana, Kenya, Rwanda and Sierra Leone in Africa; Bangladesh, Nepal and the Philippines in Asia; and Colombia in South America. The surveys were conducted by telephone.

Reports early in the pandemic suggested that developing countries might be less vulnerable because their populations are so much younger than those in Europe and North America.

But the research teams found that, within weeks after governments imposed lockdowns and other measures to control the virus’s spread, the pandemic was having a pervasive economic impact:

“The combination of a lengthy period of undernutrition, closed schools, and limited health care may be particularly damaging in the long run for children from poorer households who do not have alternative resources,” the authors wrote.

Miguel’s recent research has focused on economic conditions for poor people in Kenya, and he said people there scrambled to cope with the crisis. People in Medellín, Colombia, wait in line to collect financial aid during the COVID-19 pandemic. Colombia was one of the hardest-hit among nine countries surveyed in new research co-authored at the University of California, Berkeley. (International Monetary Fund photo by Joaquin Sarmiento)

“People moved in with relatives,” he said. “People moved back to their home areas in rural places where there was food. Other people were just relying on the generosity of friends and relatives and co-workers to get by. When you’re living on only a couple of dollars a day, and you don’t get that money, it’s a desperate situation.”

“COVID-19 and its economic shock present a stark threat to residents of low- and middle-income countries — where most of the world’s population resides — which lack the social safety nets that exist in rich countries,” Athey said. “The evidence we’ve collected shows dire economic consequences … which, if left unchecked, could thrust millions of vulnerable households into poverty.”

But the crisis has also produced hopeful engagements. The CEGA initiative to support  Togolese leaders in developing a system for digital relief payments could be a model for international partnerships.

Under that project, CEGA co-Director Joshua Blumenstock has worked closely with top government officials in Togo to develop an advanced data-driven system for identifying people in need and delivering financial aid. The system uses new computational technologies, with data from satellite imagery, mobile phones and traditional surveys to identify people or communities in economic distress.

CEGA and the GiveDirectly aid organization have just won a $1.2 million grant under the data.org Inclusive Growth and Recovery Challenge to allow further work on the project.

“Over 550,000 Togolese individuals have received cash transfers of roughly $20 a month,” said Lauren Russell, CEGA director of operations. “The grant should allow for the project to be scaled and evaluated even further, with the hope that the methods might be well-suited for adoption by other low- and middle-income countries.”

Still, Miguel said the disparities between rich and poor nations have been “disheartening.” In North America and Europe, nations may be struggling with vaccination plans, but vaccines have barely arrived in most low-income countries, he said.

“We will not recover in the rich countries until the whole world gets the vaccine and until the crisis is dealt with globally,” he said. “As long as there’s active pandemic in parts of the world that’s affecting travel and tourism and trade, our economy and our society is going to suffer. If we can spread the wealth in terms of pandemic relief assistance and vaccine distribution, we’re all going to get out of this hole faster.”