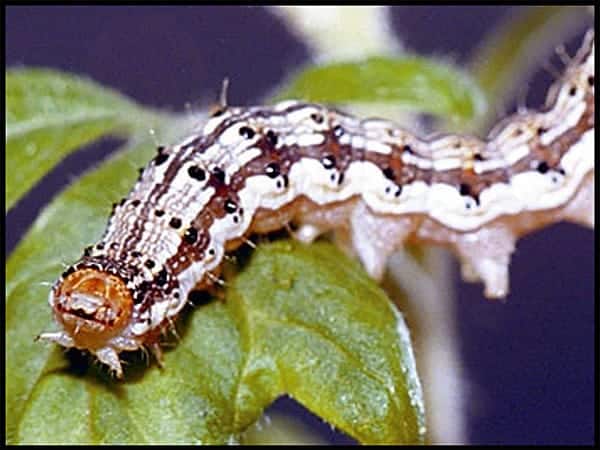 Like a scene from a horror movie, tomato fruitworm caterpillars silence their food plants’ cries for help as they devour their leaves. That is the finding of a multidisciplinary team of researchers, who said the results may yield insights into the abilities of crop plants — such as tomato and soybean — to withstand additional stressors, like climate change.

“We have discovered a new strategy whereby an insect uses saliva to inhibit the release of airborne plant defenses through direct manipulation of plant stomata,” said Gary Felton, professor and head of the Department of Entomology at Penn State, noting that stomata are tiny pores on plant leaves that regulate gas exchange, including plant defensive emissions and carbon dioxide, between the plant and the environment.

“HIPVs are thought to help protect plants from insect herbivores by attracting natural enemies of those herbivores and by alerting neighboring plants to the presence of herbivores nearby,” Felton said. “Consequently, stomatal closure has the potential to alter interactions across the entire plant community.”

In their experiments, the researchers used CRISPR/Cas9, a technique for editing genomes, to produce caterpillars that lack the GOX enzyme. In separate glass chambers fitted with filter traps to collect HIPVs, they allowed the caterpillars with the non-functional enzyme, along with unmanipulated caterpillars, to feed on tomato, soybean and cotton plants for three hours. To examine the stomatal response to GOX, the team examined the plant leaves under a microscope and measured the size of the stomatal openings. Next, they extracted the volatile compounds from the filter traps and used gas chromatography, coupled with mass spectrometry, to identify and quantify the HIPVs.

“This study is the first to use CRISPR/Cas9-mediated gene editing to study the function of an insect salivary enzyme,” said Po-An Lin, a graduate student in entomology at Penn State and the lead author of the paper. “Using pharmacological, molecular, and physiological approaches, we were able to show that this salivary enzyme plays a key role in insect-induced stomatal closure and likely the reduction of several important defensive emissions.”

Indeed, the team — comprising experts in molecular biology, chemical ecology, plant physiology and entomology — found that GOX, secreted by the caterpillar onto leaves, causes stomatal closure in tomato plants within five minutes, and in both tomato and soybean plants for at least 48 hours. They also found that GOX inhibits the emission of several HIPVs during feeding, including (Z)-3-hexenol, (Z)-jasmone and (Z)-3-hexenyl acetate, which are important airborne signals in plant defenses. Interestingly, they did not find an effect of GOX on the cotton plants, which, the team said, suggests that the impacts of GOX on stomatal conductance is species dependent.

The team’s results appeared in the Jan. 18 issue of New Phytologist.

Lin noted that the fact that tomato fruitworm caterpillars evolved a salivary enzyme that inhibits emissions of defensive volatiles in certain species suggests the importance of plant airborne defenses in the evolution of insect herbivores.

“Given the ubiquity of HIPVs in plants, it is likely that traits which influence HIPVs have evolved broadly among insect herbivores,” he said.

Not only do these insects damage individual plants, but they also may render them less able to withstand climate change.

“Stomata are important organs of plants that not only detect and respond to environmental stressors, but also play a central role in plant growth,” said Felton. “Because stomata play an important role in regulating leaf temperature and leaf water content, our findings suggest that the control of stomatal opening by an insect could impact the plant’s response to elevated temperatures occurring with climate change and response to water deficiency.”

The National Science Foundation, Agricultural and Food Research Initiative Program of the United States Department of Agriculture, and a Hatch Project Grant supported this research.