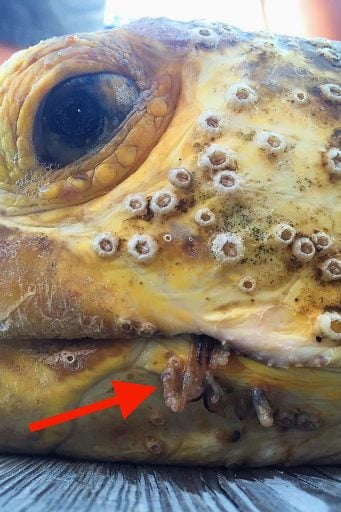 University of Central Florida researchers are homing in on the cause of a major disease of sea turtles, with some of their latest findings implicating saltwater leeches as a possible factor.

The disease, known as fibropapillomatosis, or FP, causes sea turtles to develop tumors on their bodies, which can limit their mobility and also their health by interfering with their ability to catch and eat prey.

While the cause of FP isn’t known, saltwater leeches have been suspected to play a role due to their frequent presence on areas of sea turtles where FP tumors often develop, such as on their eyes, mouths and flippers.

The results, which were published recently in the journal Diseases of Aquatic Organisms, are the first evidence of a significant association between leeches and the disease in sea turtles, according to the researchers.

“Florida is one of the areas most heavily impacted by FP,” says Anna Savage, an associate professor in UCF’s Department of Biology and study co-author. “Over the past three decades, approximately half of the green turtle juveniles encountered in the Indian River Lagoon have FP tumors, which is one of the highest rates documented,” she says.

Sea turtle health is important because the ancient marine reptiles contribute to healthy oceans and coastlines by grazing and maintaining sea grass beds.

All sea turtles are categorized as threatened or endangered because of threats from pollution, coastal development and fishing, in addition to infectious diseases.

Central Florida’s Atlantic coastline hosts about one-third of all green turtle nests in the state and is one of the most important nesting areas in the world for loggerheads.

Knowing if leeches play a role in the disease transmission can help researchers better understand and predict its spread, as well as inform conservation actions, such as leech removal in sea turtle rehabilitation centers.

The study’s lead author and a recent undergraduate alumna of UCF’s Biology Department, Leah Rittenburg, spearheaded the research and was responsible for the genetic analyses.

To find out a possible connection between leeches and FP, the researchers documented the presence of leeches on green and loggerhead turtles captured from the Indian River Lagoon and also used genetic analyses to determine if leeches collected from the turtles contained chelonid alphaherpesvirus 5, or ChHV5, the virus most likely responsible for disease development in an individual turtle.

“Our historical data, collected by the UCF Marine Turtle Research Group between 2006 and 2018, revealed that leech parasitism was significantly associated with FP in green turtles but not in loggerhead turtles,” Rittenburg says.

“For the genetic analysis, about one-fifth of the leeches we collected were positive for ChHV5, and one leech species trended towards coming from FP-positive turtles, further supporting the hypothesis that leeches may act as ChHV5 transmitters,” she says.

Now that the researchers have demonstrated a relationship between FP and leeches, they want to evaluate more specifically if leeches transmit the turtle herpesvirus, which would provide stronger evidence that the virus in an underlying cause of FP.

The research was funded by grants from UCF’s Office of Undergraduate Research and by a Florida Sea Turtle License Plate grant.

Savage received her doctorate in ecology and evolutionary biology from Cornell University. She is a member of UCF’s Genomics and Bioinformatics Cluster and joined UCF’s Department of Biology, part of UCF’s College of Sciences, in 2015.