Venus wouldn’t attract much attention if it were outside our solar system. Its skies are filled with sulphuric acid, its land abounds with extinct volcanoes and its surface is mostly red hot lava.

NASA has selected two missions, dubbed DAVINCI+ and VERITAS, to study the “lost habitable” world of Venus. Each mission will receive approximately US$500 million for development and both are expected to launch between 2028 and 2030.

It had long been thought there was no life on Venus, due to its extremely high temperatures. But late last year, scientists studying the planet’s atmosphere announced the surprising (and somewhat controversial) discovery of phosphine. On Earth, this chemical is produced primarily by living organisms.

The news sparked renewed interest in Earth’s “twin”, prompting NASA to plan state-of-the-art missions to look more closely at the planetary environment of Venus — which could hint at life-bearing conditions.

Ever since the Hubble Space Telescope revealed the sheer number of nearby galaxies, astronomers have become obsessed with searching for exoplanets in other star systems, particularly ones that appear habitable.

But there are certain criteria for a planet to be considered habitable. It must have a suitable temperature, atmospheric pressure similar to Earth’s and availabile water.

In this regard, Venus probably wouldn’t have attracted much attention if it were outside our solar system. Its skies are filled with thick clouds of sulphuric acid (which is dangerous for humans), the land is a desolate backdrop of extinct volcanoes and 90% of the surface is covered in red hot lava flows.

Despite this, NASA will search the planet for environmental conditions that may have once supported life. In particular, any evidence that Venus may have once had an ocean would change all our existing models of the planet.

And interestingly, conditions on Venus are far less harsh at a height of about 50km above the surface. In fact, the pressure at these higher altitudes eases so much that conditions become much more Earth-like, with breathable air and balmy temperatures.

If life (in the form of microbes) does exist on Venus, this is probably where it would be found.

It will aim to understand the atmospheric origins on Venus, focusing on how it first formed, how it evolved and how (and why) it is different from the atmospheres of Earth and Mars.

This will involve understanding the history of water on Venus and the chemical processes at work in its lower atmosphere. It will also try to determine whether Venus ever had an ocean. Since life on Earth started in our oceans, this would become the starting point in any search for life.

This aspect of the mission will provide insights into geographically complex tessera regions on Venus (which have highly deformed terrain), and will investigate their origins and tectonic, volcanic and weathering history.

These findings could shed light on how Venus and Earth began similarly and then diverged in their evolution.

The DAVINCI+ spacecraft, upon arrival at Venus, will drop a spherical probe full of sensitive instruments through the planet’s atmosphere. During its descent, the probe will sample the air, constantly measuring the atmosphere as it falls and returning the measurements back to the orbiting spacecraft.

The probe will carry a mass spectrometer, which can measure the mass of different molecules in a sample. This will be used to detect any noble gases or other trace gases in Venus’s atmosphere.

In-flight sensors will also help measure the dynamics of the atmosphere, and a camera will take high-contrast images during the probe’s descent. Only four spacecraft have ever returned images from the surface of Venus, and the last such photo was taken in 1982. 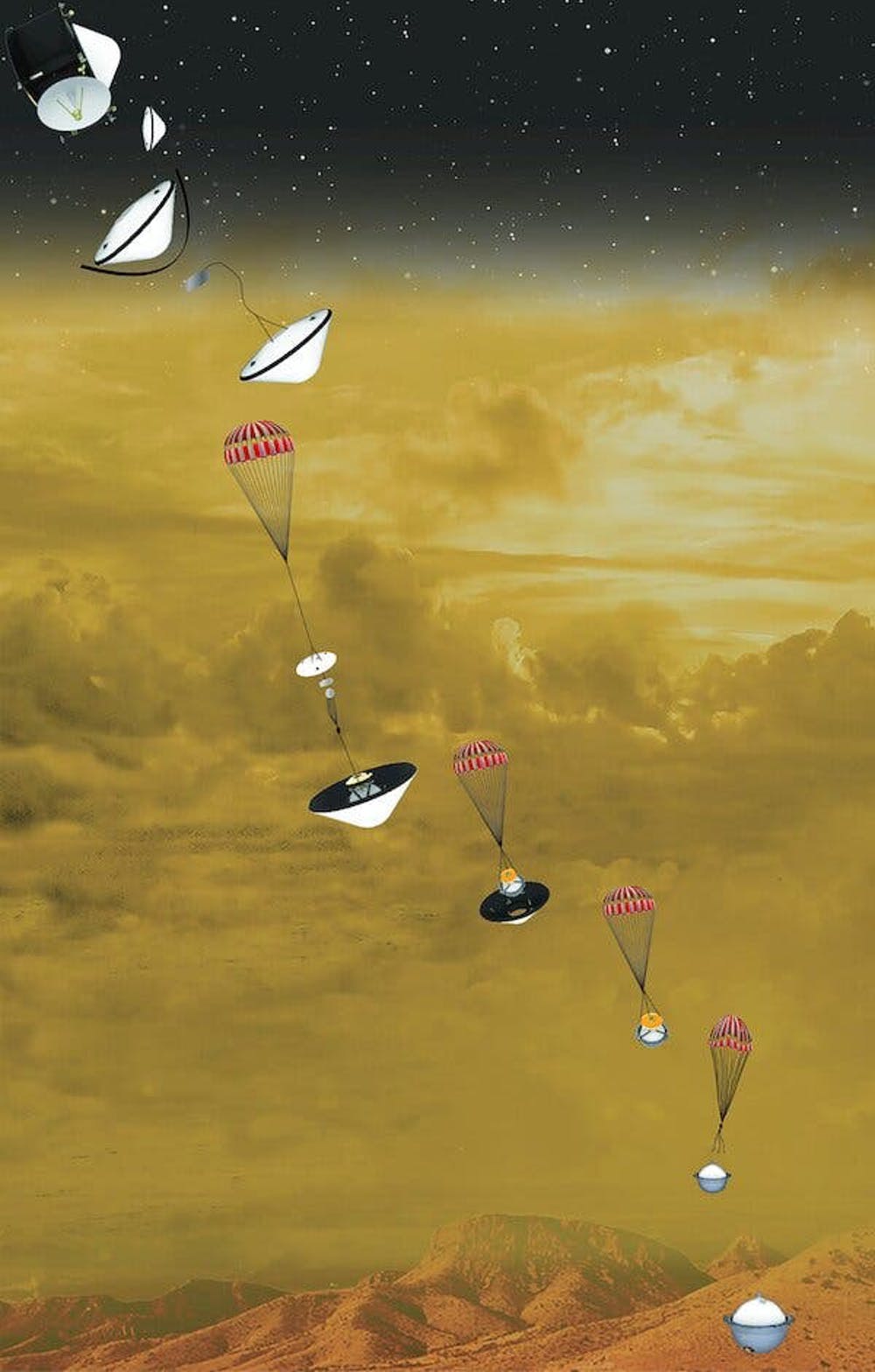 An artist’s concept of the NASA DAVINCI+ probe descending in stages to the surface of Venus. NASA/GSFC 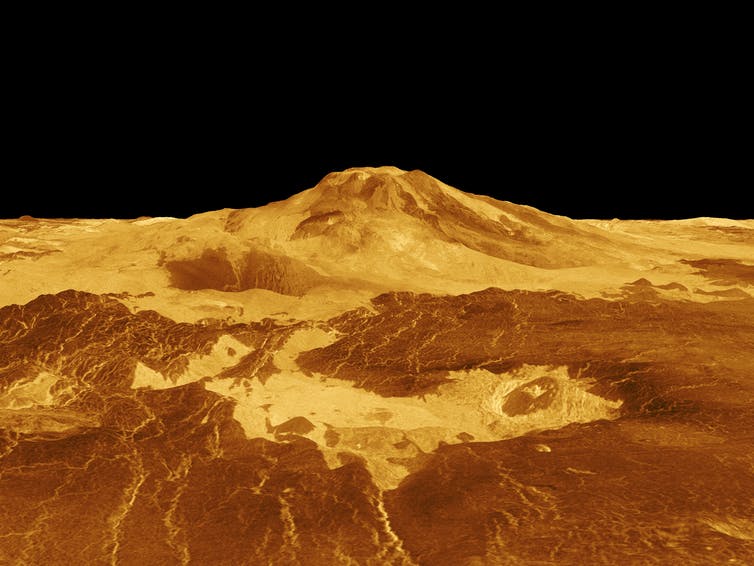 Maat Mons is the highest shield volcano on Venus and the second-highest mountain on the planet. NASA

Meanwhile, the VERITAS (Venus Emissivity, Radio Science, InSAR, Topography, and Spectroscopy) mission will map surface features to determine the planet’s geologic history and further understand why it developed so differently to Earth.

Historical geology provides important information about ancient changes in climate, volcanic eruptions and earthquakes. This data can be used to anticipate the possible size and frequency of future events.

The mission will also seek to understand the internal geodynamics that shaped the planet. In other words, we may be able to build a picture of Venus’s continental plate movements and compare it with Earth’s.

At the same time, the Venus Emissivity Mapper (VEM) instrument on board the orbiting VERITAS spacecraft will map emissions of gas from the surface, with such accuracy that it will be able to detect near-surface water vapour. Its sensors are so powerful they will be able to see through the thick clouds of sulphuric acid.

Key insight into conditions on Venus

The most exciting thing about these two missions is the orbit-to-surface probe. In the 1980s, four landers made it to the surface of Venus, but could only operate for two days due to crushing pressure. The pressure there is 93 bar, which is the same as being 900m below sea level on Earth.

Then there’s the lava. Many lava flows on Venus stretch for several hundred kilometres. And this lava’s mobility may be enhanced by the planet’s average surface temperature of about 470°C. 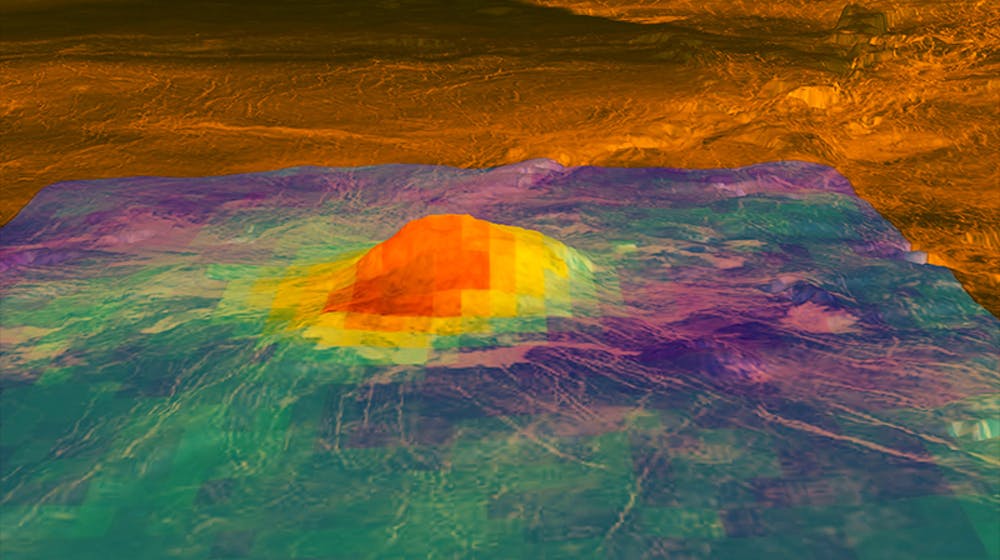 There are only three bodies in our solar system with confirmed active fire volcanoes: Earth, Mars and Jupiter’s Io moon. But recent research has proposed Idunn Mons (pictured), a volcanic peak on Venus, may still be active. EarthSky

The information obtained from DAVINCI+ and VERITAS will provide crucial insight into not only how Venus formed, but how any rocky, life-giving planet forms. Ideally, this will equip us with valuable markers to look for when searching for habitable worlds outside our solar system.

This article is republished from The Conversation under a Creative Commons license. Read the original article.