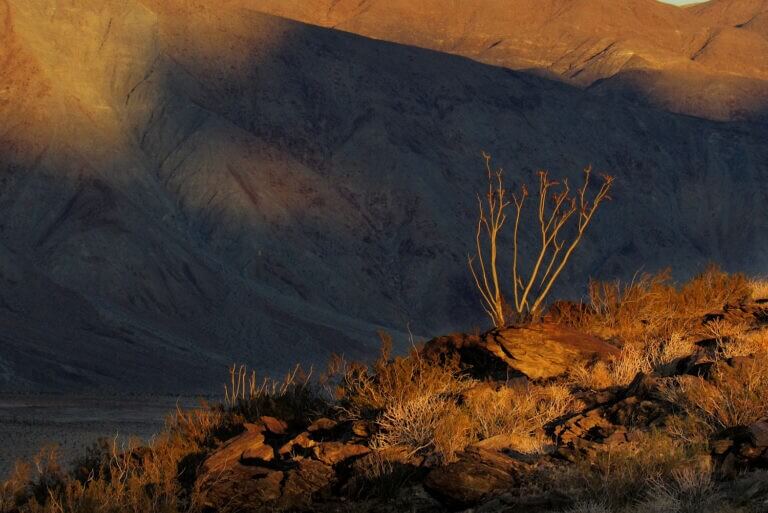 UCI researchers found that the number of Sonoran Desert plants – such as ocotillo (above), creosote bush, yucca and mesquite – decreased by about 35 percent between 1984 and 2017. Sicco Rood / Steele/Burnand Anza-Borrego Desert Research Center

A shift is happening in Southern California, and this time it has nothing to do with earthquakes. According to a new study by scientists at the University of California, Irvine, climate change is altering the number of plants populating the region’s deserts and mountains.

Using data from the Landsat satellite mission and focusing on an area of nearly 5,000 square miles surrounding Anza-Borrego Desert State Park, the research team found that between 1984 and 2017, vegetation cover in desert ecosystems decreased overall by about 35 percent, with mountains seeing a 13 percent vegetation decline.

“Plants are dying, and nothing’s replacing them,” said Stijn Hantson, a project scientist in UCI’s Department of Earth System Science and lead author of the study. “It looks to be a striking loss for shrubs.”

The reduction of vegetation cover in deserts, the researchers say, is the result of considerable year-to-year variability in rainfall in conjunction with climbing temperatures associated with anthropogenic climate change. The work encompassed swaths of the Sonoran Desert, including Anza-Borrego Desert State Park, where plants such as creosote bush, yucca, ocotillo and mesquite grow.

The hope had been that desert plants would stand a better chance against climate change, as they come equipped with drought-tolerant features. But, the authors note, the plants exist right on the edge of what’s habitable, so any environmental shift toward greater extremes is likely to be detrimental. “They’re already on the brink,” Hantson said.

The team’s findings, published today in the Journal of Geophysical Research: Biogeosciences, corroborate those of previous field studies in which different groups documented drought-related die-offs of dryland plants in the Southwest, with some species completely disappearing from their habitat – possible local extinction events that shouldn’t happen under more moderate, normal hydrologic and temperature conditions.

The situation in mountains where pines and oaks grow is less stark, which the researchers attribute to more rain. The Santa Rosa Mountains, for example, see an average of 770 millimeters of precipitation a year, while regional deserts experience as little as 73 millimeters annually.

Landsat satellite imagery, Hantson explained, is ideal for gauging vegetation cover shifts because it supplies spectral data for surface areas of about 90 square meters – fine enough to track changing spectral signal patterns across large study areas. The data provide a sense of how “green” a landscape is and helped the UCI team discern shifts across the study’s 34-year time window.

Long-term plant monitoring is now underway in Anza-Borrego so that researchers can see what happens to vegetation cover as the years unfold, since changes in plant communities can affect many things, from how well soils retain water to how much food there is for desert animals.

Funding for the work came from Anza Borrego Desert State Park, the California Strategic Growth Council and the UC National Laboratory Fees Research Program. The research originated from a collaboration among scientists in UCI’s Department of Earth System Science, including Hantson and co-authors James Randerson and Michael Goulden; and scientists in UCI’s Department of Ecology and Evolutionary Biology, including Sarah Kimball and Travis Huxman.

About the University of California, Irvine: Founded in 1965, UCI is the youngest member of the prestigious Association of American Universities and is ranked among the nation’s top 10 public universities by U.S. News & World Report. The campus has produced three Nobel laureates and is known for its academic achievement, premier research, innovation and anteater mascot. Led by Chancellor Howard Gillman, UCI has more than 36,000 students and offers 224 degree programs. It’s located in one of the world’s safest and most economically vibrant communities and is Orange County’s second-largest employer, contributing $7 billion annually to the local economy and $8 billion statewide. For more on UCI, visit www.uci.edu.

Media access: Radio programs/stations may, for a fee, use an on-campus ISDN line to interview UCI faculty and experts, subject to availability and university approval. For more UCI news, visit news.uci.edu. Additional resources for journalists may be found at communications.uci.edu/for-journalists.

About the UCI’s Brilliant Future campaign: Publicly launched on October 4, 2019, the Brilliant Future campaign aims to raise awareness and support for UCI. By engaging 75,000 alumni and garnering $2 billion in philanthropic investment, UCI seeks to reach new heights of excellence in student success, health and wellness, research and more. The School of Physical Sciences and the School of Biological Sciences play a vital role in the success of the campaign. Learn more by visiting: https://brilliantfuture.uci.edu/uci-school-of-physical-sciences/ and https://brilliantfuture.uci.edu/uci-school-of-biological-sciences/.